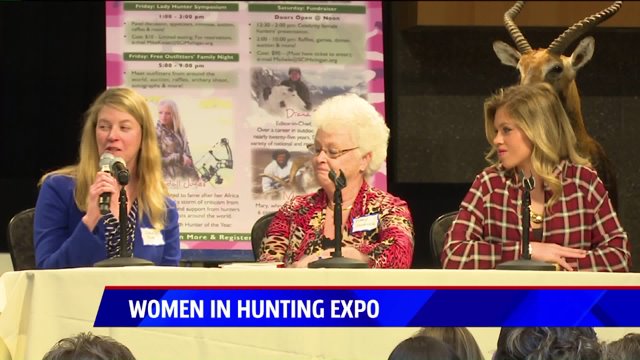 HUDSONVILLE, Mich.-- A controversial hunting organization is hosting their annual fundraising event this weekend in West Michigan. The group kicked off the weekend with an event encouraging more women to get involved in hunting.

Safari Club International is an organization dedicated to protecting the rights of hunters and conservation education. While hunting is a male-dominated sport, it's something the group is trying to change.

"Women are the fastest growing population of hunters, said Dan Olson, President of the Michigan chapter of Safari Club International. "When you come to a lot of our meetings it's mostly men. We want to get more of the women involved and this is the best way to do that."

The Michigan chapter of Safari Club International invited three generations of female hunters, all of which are famous in their field. The youngest: 22-year-old Kendall Jones, whose photos were shared around the world in 2014.

"I went over to Africa and I was hunting the big five," said Jones. "I posted pictures of all of my animals and the lion picture I posted, the anti-hunters got a hold of it and posted it on all of their anti-hunting websites. They put it on the news and it just kind of blew up. I was on all of the news stations in other countries with my face on their newspapers. In Germany, I was the 'Baby Face Killer'."

Now, Jones is using her platform to encourage women and children to get outdoors.

"Since everything's happened, it's really given me a platform to have a voice for hunters," said Jones. "It's given me the ability to spread awareness and educate these people on what conservation really is. My goal is to get females and the youth involved."

Jones says she wants children to learn to love hunting so the sport doesn't disappear.

"I love kids and I would love for them to get outside," said Jones. "I think some kids are so sheltered nowadays with being inside and being on their phones so much they don't get to experience the great outdoors. If we don't get them outside hunting is going to die off. Having this pedestal, that's something I want to do is get them involved and get them outside."

Also in attendance was Diana Rupp, editor in chief of Sports Afield magazine.

"Wildlife conservation is really driven by hunters and not a lot of people know that story, but it's really true," said Rupp. "The money that we put into hunting licenses and the money that's raised by organizations like the one we're at now with the fundraiser is super important to our wildlife heritage."

Rupp says some people have misconceptions about hunting.

"It's not that we hate animals or anything like that which a lot of people think," said Rupp. "It's absolutely the opposite. We love animals. We are trying to promote wildlife conservation in a way that truly works and raise a lot of money for the animals and for the habitat."

Mary Harter, the 2015 Woman Hunter of the Year, was also there pushing women to get involved.

"We can do it," said Harter. "Women are known to shoot better than men. We can do it."