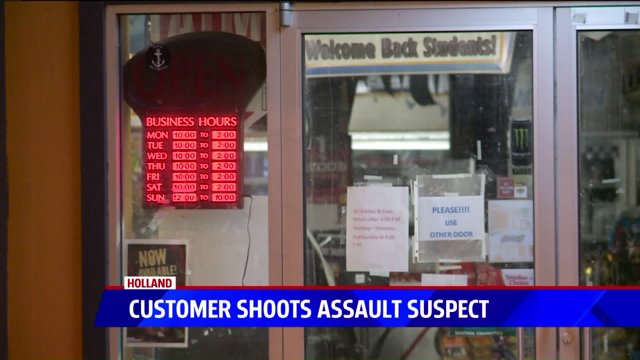 HOLLAND, Mich. — A man who walked into a party store on the lakeshore ended up breaking up an assault late Thursday night by shooting the suspect. Police say he was legally carrying his firearm and acted in self defense.

It happened at around 10:20 p.m. at the Columbia Ave One Stop in Holland.

Police say a 29-year-old male suspect was assaulting a woman in the store when another customer entered the building.

"The female did state that she was in fear for her life and felt like she's going to be beat to death," Keith Mulder, a captain with the Holland Public Safety said.

Police say the another man noticed the attack as he walked by the store and went inside. When the 43-year-old Good Samaritan attempted to break up the assault, the suspect turned his attention on him and began attacking him instead.

Little did the suspect know that the customer was armed with a handgun. The man drew his weapon and shot the attacker twice.

The suspect was last listed in critical condition.

Police say the armed customer acted in self defense, and was legally carrying his firearm with a valid Concealed Pistol License. He is cooperating with the investigation and will not be arrested.

"You can use whatever means necessary to protect somebody from serious injury or death, whether it's another person or themselves," Mulder said.

Police say the suspect already had warrants out for his arrest and now faces assault charges.