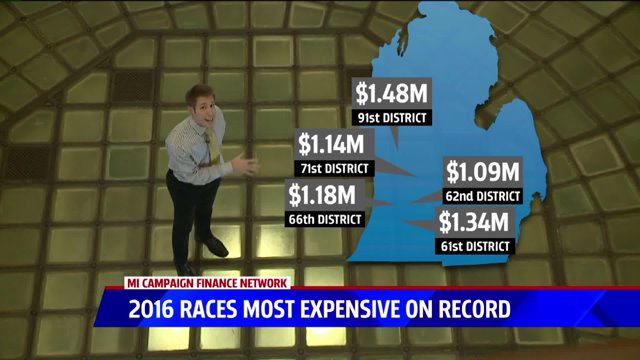 LANSING, Mich. — More money was spent in 2016 in the fight to control state politics than at any other time in Michigan history and many of the most expensive races were fought in West Michigan.

Spending reports and other data compiled by the non-profit non-partisan Michigan Campaign Finance Network (MCFN) on every 2016 Michigan House of Representatives race found a record-breaking $27 million was spent by political parties, donors and other special interest groups on campaigns.

“It takes tracking hundreds of candidates, thousands of pages and disclosures made to the federal government," said Craig Mauger, executive director.

But Mauger said their tally still doesn't accurately represent the total amount of money spent because special interests groups—not required to disclose donors and acting independently of candidates—continue to grow their financial influence with each election cycle.

"The problem with more and more money pouring in, it’s coming from a smaller and smaller number of groups so that gives the regular citizen less voice," he said.

More money than ever before is also flowing solely into some of the state's most competitive races, which Mauger says are no more than 15 of the state's 110 House districts.

Several of the most expensive races in the entire state were in West Michigan where spending in five districts exceeded $1 million.

The rematch in Muskegon's 91st District between incumbent Republican Rep. Holly Hughes and former Democratic Rep. Colleen Lamonte ended as the most expensive in the entire state, topping out at $1.48 million.

Elsewhere, the battle for control of Kalamazoo's 61st District between incumbent Republican Rep. Brandt Iden and Democratic challenger John Fisher ended as the second most expensive in the state with at least $1.34 million spent.

The race in the 66th District between Beth Griffin and Annie Brown, $1.16 million was spent, while battle for the 62nd District in the Battle Creek area between incumbent Republican Rep. John Bizon and challenger Jim Haadsma attracted $1.09 million in spending.

"A lot of spending was focused on races in West Michigan," Mauger said. "That could be for a variety of reasons, but a lot of the closest districts are in West Michigan.”

Within those districts some voters reported being inundated with mailers about candidates, according to Mauger, and many of those mailers were funded by groups not directly affiliated with the candidate.

"Because of that, we have no idea who paid for them," he said. "And when we talk about the total cost of state house races, this mail generally is not included because it doesn’t have to be reported.”

Beyond mailers, MCFN reports $2.42 million was spent on 'issue' television advertising. But like the mailers, donors behind the ads do not have to be disclosed.

Spending on social media advertising and robocalls also is not required to be disclosed.