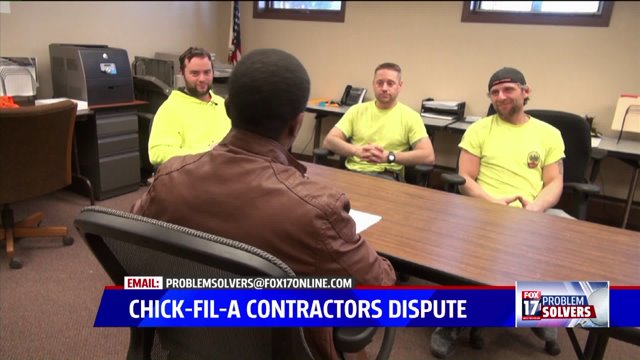 WEST MICHIGAN — Chick-fil-A's West Michigan debut continues to make a splash. Now, union carpenters say they were hired to build the frame of the buildings in Wyoming and Portage, but during construction in the fall, the excitement for these workers quickly wore off when final payments for their portion of the project came up short.

The call to "Eat Mor Chikin" led to long lines in Gaines Township and Wyoming. Those are the first two locations in West Michigan, and the company said a third location is on its way to Portage.

The fast food chain has created buzz, and it's also created jobs.

"When I started, it was a concrete slab," union carpenter Don Newhouse said.

"It was going to be an exciting project for me, taking my children there and showing them what I built," carpenter Mark Richey said.

"We go to work so we can take care of our families, our homes, our responsibilities," Vinson said.

In January, the carpenters union filed a construction lien against both Chick-fil-A properties, alleging Infinity Homescapes owes 24 carpenters a total of $35,000.

He said every company involved has done nothing but point their finger.

Vinson said his bank account was frozen, "which made it to where we owe the bank money now."

"Almost lost a house," Newhouse said, who added that a friend lost her vehicle.

"The bottom line is that we're trying to work with [Thorndale] and try to get paid for the work that we performed," said Josie Lewis, attorney for Infinity Homescapes.

Alan Horsman, president of Thorndale, said the contract with Infinity was only for $30,900 for non-union workers. He said Infinity went over budget and hired union employees at the last minute.

The dispute has left workers caught in the middle.

"Just do the right thing," said Richey. "Pay people what you owe them."

Chick-fil-A spokesperson Brenda Morrow offered this response: "This is a dispute between our general contractor, Thorndale Construction Services, Inc., and their vendor, Infinity Homescapes. Chick-fil-A, Inc. has paid all progress payments to our general contractor on time and in full. Thorndale Construction Services is working to resolve this dispute with their vendor.”