Trucking Towards Safety: How tech is making the roads safer 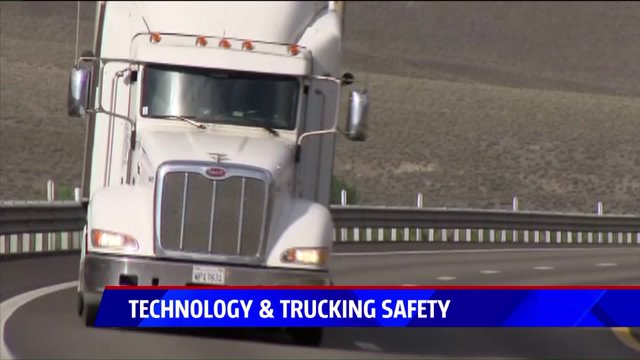 GRANDVILLE, Mich. – There’s no doubt that semi-trucks play a crucial role in moving American industry forward. From clothes, to food, to just about everything else you can buy and sell, most of goods we rely on to get by were at one point transported in the back of a truck.

But those big rigs are also the culprits of thousands of serious and deadly accidents each year. Whether it’s the fault of the drivers or motorists around them, the problem exists. But with the help of technology, the hope is, that problem will diminish.

Grandville-based Columbian Logistics is one company getting out ahead of the game. Since the beginning of last year, they’ve been digitizing their entire fleet – even systems that, for years, have been done by hand. Old log books are making way for iPads and accountably is becoming more and more of a habit for drivers.

“Safety is our number one core value within our organization,” said Douglas Johnson, Executive Vice President of Columbian. “We’re getting ahead of the game. We’re not sitting back, waiting. We know that the government is going to be mandating this.”

But the question that remains on that front is, ‘when?’ Currently in open comment period, there’s a proposal sponsored by Georgia and New York congressmen that wouldn’t just track the speeds of big rigs – it would electronically limit them to a specified top speed. The governor concept may sit well with owners of some fleets, but for Todd Spencer, Executive Vice President of the Owner-Operator Independent Trucking Association, it’s lunacy.

Spencer’s argument is simple: unnecessarily slower speeds means more time spent on the roads for drivers, which leads to fatigue and, in turn, more crashes.

“We have one group saying, for safety reasons, we need to do this,” said Spencer, “and on the other side we have people saying, but wait a minute, we’ve already got drivers that are driving too long. Yet here we have a government proposal that basically says, you’re going to have to spend more time on the roads.”

He may not be wrong. Data provided to FOX 17 by Dr. Steven Johnson, a professor of industrial engineering at the University of Arkansas, indicates that differences in speed between cars and trucks is the root cause of most accidents.

“Generally it doesn’t even matter what the speed limit is, in that whether it’s faster or slower. As long as vehicles are traveling at the same speed, they don’t interact with each other,” said Spencer. “If you don’t interact with each other the opportunities for crashing are really diminished. Current NHTSA crash data shows that cars run into the backs of trucks three times more often than trucks run into the back of cars.”

“Saying that slower is going to be safer sort of assumes a lot of things that don’t really play out on the road,” said Spencer.

Regardless of policy or where the proposal lands on Capitol Hill, Columbian isn’t taking any chances. While they aren’t limiting the speeds of their drivers, the new tech they’ve already implemented is a positive advantage they aren’t getting rid of any time soon.

“We value safety,” said Johnson. “We just think this is a great opportunity for us to enhance that within our drivers, our customers, and the people out on the roads. So we’re going to do it.”