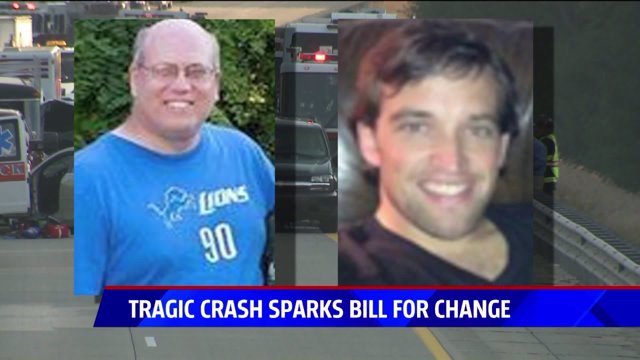 LANSING, Mich. -- The state Senate is expected to vote on a reintroduced bill next week that would change the Michigan vehicle code to help families seek justice after losing a loved one.

A tragic Kent County accident Sept. 10, 2013 is the catalyst for this bill which would close the loopholes in the Michigan vehicle code: which require law enforcement to obtain search warrants to test drivers' blood and urine accused of causing fatal crashes; and do not include drivers' urine samples as possible admissible evidence. On that day around 8 a.m. John Pomeroy, 49, with friend and fellow insurance agent, Billy Kochis, 29, a father of four children under the age of five, were killed.

“Billy was probably one of the most vibrant individuals you would ever come across," said John Collins, Kochis' cousin to FOX 17 Thursday.

The convicted driver, Patrick Doerr, 58, was driving an estimated 83 miles per hour slightly uphill on US-131 southbound, just north of Post Drive, when he rear-ended Pomeroy and Kochis driving in a Malibou, according to police reports.

Doerr was convicted of a misdemeanor, though his urine tests showed traces of cocaine and opiates, a potential felony. Current state law requires law enforcement to obtain search warrants to test urine or blood for evidentiary purposes, and the state vehicle code does not include urine samples as admissible evidence.

Schmidt and Collins testified before the Senate Judiciary Committee Tuesday that in this case there was a miscommunication between the responding trooper and a magistrate. Ultimately, the magistrate denied the trooper's search warrant to test Doerr's blood. Meanwhile, Doerr's urine sample showing cocaine and opiates was not admissible in court due to the Michigan vehicle code.

“It made us feel for my cousin’s sake and his memory, it just kind of cheapened the whole process because we didn’t have a chance to really fully vet what the judicial possibilities were for [Doerr]," said Collins.

Collins, Kochis' first cousin and also a former Michigan State Police crime labs' director, has been pushing for change in this law for years. Last February, he exclusively shared his letter to MSP Director Colonel Kriste Etue with FOX 17, calling for the crimes labs to become independent of state police writing in part:

"…In my experience, a lack of care of respect for the scientific enterprise has pervaded the executive command of the Michigan State Police for decades.”

“The loophole in the Michigan law says, ‘Oop sorry, that’s not blood that’s urine; that is not admissible in court because that was taken for medical purposes not for evidentiary purposes,’" explained Collins Thursday.

"And we said, wait a second that makes no sense. ‘So you’re saying if the hospital had taken his blood then it would be admissible?’ ‘Well yeah.’ That’s ridiculous.”

If passed, Schmidt says law enforcement would request blood and urine samples of drivers causing likely fatal accidents without the need for search warrants, or implied consent. Schmidt shared this legislation is close to his heart, as he lost his wife to a tragic traffic accident.

“We had the tragedy that occurred in Grand Rapids, we don’t want that same thing to happen to another family," said Schmidt. "We want to make sure that again, justice is served.”