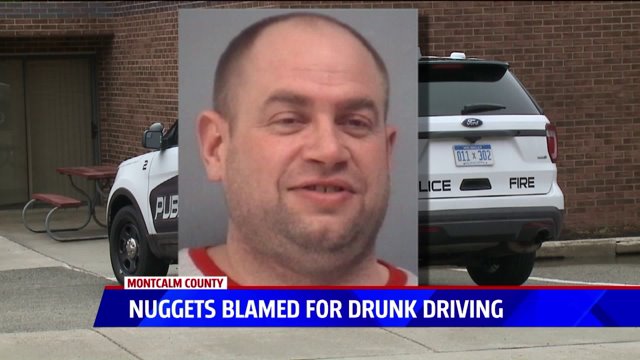 GREENVILLE, Mich. — The arrest of a newly-elected Montcalm County commissioner for suspected drunk driving is raising eyebrows after police say he blamed chicken nuggets for why he was being arrested.

Jeremy Miller was initially stopped in the early morning hours of Dec. 18 for speeding. He was later arrested for suspected drunk driving.

When the officer asked Miller if he understood why he was being arrested, the officer said Miller responded, "because I was being stupid, those damn chicken nuggets," according to the police report obtained by FOX 17.

The arresting officer with the Greenville Department of Public Safety said he stopped Miller's vehicle near Cherry and Pearl after he was clocked driving 58 mph in a 30 mph zone, according to the police report. The location is within sight of Miller's home less than two blocks away.

The officer said he smelled alcohol on Miller. When asked if he'd been drinking, Miller responded he didn't know and it had "been a night." Miller couldn't walk in a straight line during his field sobriety test, the officer reported.

An initial breathalyzer test was administered at the scene, followed by two blood tests administered roughly an hour later once Miller had been taken to jail.

His blood alcohol level was .13, according to the police report, nearly twice the legal limit.

Miller answered the door at his home Wednesday afternoon but refused to comment. He is charged with operating a vehicle while intoxicated. A bench trial is scheduled at the end of March.

Miller was elected to the Montcalm County Commission in Nov. 2016. The county website says he began serving as commissioner for the county's 1st District on Jan. 1, 2017, weeks after his arrest.

Among the committees Miller serves on, the county website lists him as an alternative on the Montcalm Substance Abuse Advisory Council.

"We will have no comment prior to the trial having taken place and a judgement rendered on the case. I can tell you that Commissioner Miller has not missed any meetings and has gone out of his way to reach out to our departments and learn for himself what their responsibilities are."

Recorded minutes show Miller has not addressed his arrest or pending trial publicly during any recent county commission meeting.