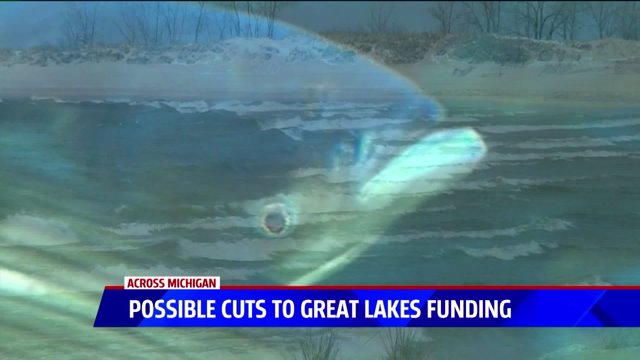 “If we see any cuts, and certainly a cut that almost eliminates the Great Lakes Initiative it’s going to be an absolute disaster," said U.S. Sen. Debbie Stabenow, (D) Michigan, to FOX 17 Friday.

Sen. Stabenow helped launch the GLRI in 2010 with an initial annual budget of $475 million, and bipartisan support. She and others including Congressman Bill Huizenga, (R) Michigan, have already stated they will push hard against these proposed cuts.

If the Trump administration's proposals are carried out, Senator Stabenow says Michigan's agriculture, fishing, tourism and boating industries are at real risk.

“It’s critical that we have a commitment from the federal government working with the state and local communities to deal with water quality issues, runoff into lakes, invasive species, the biggest one right now being Asian Carp," said Sen. Stabenow.

"But all of this relates to our ability to enjoy the Great Lakes; to be able to continue to depend on the Great Lakes for drinking water; for all of the fun that we have in the lakes as well as all the jobs that are created.”

While much of the GLRI funding is used for emergencies and currently combats Asian Carp-a leading invasive species threat to the Great Lakes-it also works to clean and restore shoreline, including Muskegon Lake.

"We’ve seen $22 million of this money go to Muskegon alone, just one of the many places that have been positively cleaned up as the result of this money," said Tim Eder, Great Lakes Commission executive director.

“We’re talking about people’s jobs here, this isn’t just about fishing about walking along the beach, this is real people’s jobs and property values. So it could be extremely devastating.”

Sen. Stabenow says it was also alarming this week when the White House stopped the Army Corps of Engineers from releasing their plan to stop Asian Carp 40 miles south of Chicago, at Brandon Road Lock and Dam. This is a plan she says has been worked on for more than a year.

FOX 17 also spoke with the National Association of Clean Air Agencies Executive Director Bill Becker Friday, who originally obtain the proposed budget and confirmed numbers to the Oregonian. While Becker would not release further documents, he confirmed the first page of the Trump administration's proposed budget to read: "The administrative budget blue print will prioritize rebuilding the military and making critical investments in the nation's security."

The President is reported to have asked for $54 billion increased spending for the military.