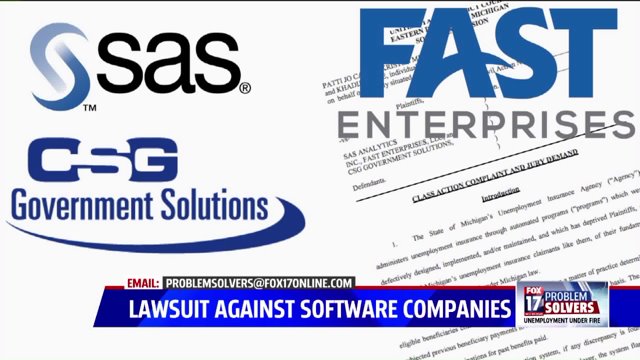 Three citizens who experienced unemployment woes are named as plaintiffs and are representing the thousands of people wrongly accused.

The plaintiffs accuse the vendors of negligence, irreversible damage, as well as violating people's constitutional rights.

The FOX 17 Problem Solvers exposed the issue in 2015. As we reported then, Fast Enterprises created MiDAS to detect fraud. It launched in October 2013 and was touted as a system that makes decisions without human intervention.

However, federal pressure mounted. In December 2016, the state reported a 93% error rate. More than 20,000 cases were overturned, and millions of dollars were refunded.
FOX 17 reached out to all three parties. As of news time, only SAS Analytics replied.

"We take this very seriously and have begun an investigation. However, it’s too early for us to comment," Trent Smith, of SAS Analytics said.

The lawsuit not only seeks monetary compensation for those wronged by the system but also looks to stop companies from making and distributing the same defective software used in MiDAS. It also wants the companies to disclose these problems to people who apply for unemployment.