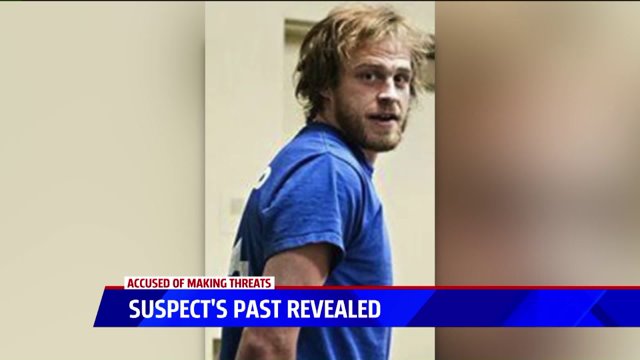 GRAND RAPIDS, Mich. — A local man charged with making threats to shoot children and people of Jewish descent was the subject of a 2016 television documentary exploring the rise of white nationalism in America.

David Lenio, 29, is facing felony charges for tweeting threats of mass shootings and threats against Jews, according to police. He was arrested Feb. 24 at his family’s home in Grand Rapids.

FOX 17 learned Lenio was the subject of a documentary which aired on the Discovery Channel spin-off Investigation Discovery entitled 'Hate in America — A Town on Fire.' The 2016 documentary exploring the white supremacy and anti-government radicals featured Lenio's Montana court proceedings and interviews with the man who intercepted Lenio's tweets, putting him on the radar of police and the FBI.

Jon Hutson, an anti-gun advocate in Maryland, said Lenio sought him out on social media.

“On Valentine’s Day 2015, I was tweeting about shootings that had just happened at free speech events in Copenhagen, Denmark," Hutson says in the Discovery Channel documentary when describing his first social media interaction with Lenio three years ago.

"One person who’d I’d never heard of started tweeting back a bunch of anti-Semitic rants."

Hutson is the only witness—other than Lenio's father and police officers—who is named in the new felony complaint related to Lenio's recent Grand Rapids arrest.

Investigators say Lenio was arrested because his latest alleged online threats violated the conditions of his release in relation to similar charges he's facing in Montana. He was arrested in 2015 and accused of making threats on social media about shooting Rabbis and wanting to target school children, saying he wanted to kill enough to exceed the number who died in the 2012 Sandy Hook Elementary attack, according to investigators.

Lenio was released from Montana and into his family’s custody as part of a deferred prosecution agreement on the condition he not be on social media and not have access to guns or witnesses related to his original charges.

"Mr. Lenio had been tweeting threatening statements to a victim in a prior case," said Sgt. Terry Dixon with the Grand Rapids Police Department.

Following his arrest in Michigan, a Maryland judge issued a temporary peace order restraining Lenio from contacting Hutson in any matter or committing or threatening to commit any act that would cause serious bodily harm.

Lenio's father's is a prominent investment banker in Grand Rapids at Tillerman and Co. Lenio's parents were in the courtroom for their son's proceedings on Tuesday but refused FOX 17's request for comment.

In the Discovery Channel documentary, police say Lenio's father told them he believed his son suffered from a mental illness.

The Southern Poverty Law Center, which has extensively covered Lenio's case, previously accused him of violating the terms of his release 348 times by re-tweeting messages written by other people.