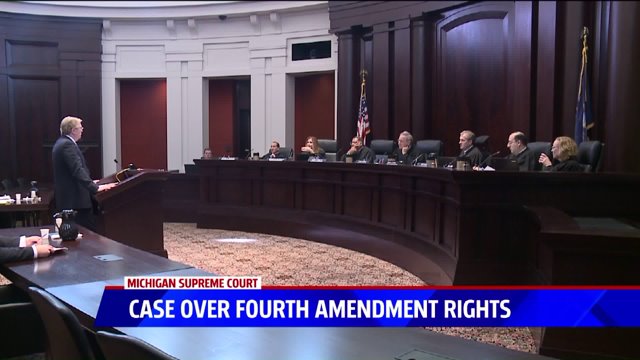 LANSING, Mich. -- The Michigan Supreme Court justices heard arguments Thursday as to whether the Fourth Amendment, or search and seizure, rights of two former Kent County jail deputies were violated. Investigators seized marijuana butter which led to a string of drug charges including marijuana possession, delivery, and maintaining a drug house. One sergeant charged took his life before sentencing.

Todd Van Doorne and Michael Frederick, former Kent County jail deputies of up to 23 years, listened to their attorneys fight the knock and talk procedure that seven deputies, including two of their bosses, used back in March 2014. Major underlying questions in this case remain: were their constitutional rights violated, and could they have said 'no' to their superiors asking them to talk on their doorsteps early that morning?

Ultimately this case has wide implications. If the Michigan Supreme Court decides to take on Van Doorne and Frederick's cases, it could determine the future of knock and talk policing policy. It would essentially determine when police can come to your home and ask to talk without a warrant; do they have to knock only during waking hours?

March 2014 seven Kent County deputies, including two superiors, went to four former Kent County sergeant and deputies' homes early in the morning asking to talk without a warrant. Dressed in tactical gear with police lights on, they reached Frederick's home at 4 a.m. and Van Doorne's at 5:30 a.m. with each family, including children, asleep.

“Do you really contend that having seven armed and vested officers arrive at your home at 4a.m. is a normative thing we customarily expect, and pound on your door five minutes, is that your argument?”

To which the prosecutor corrected stating there were two then four deputies at each door respectively and "Normative for somebody to do that all the time? No.”

Justice Young interjected: “Ever! Except in an emergency. What neighborhood do you live in?”

The prosecution argued this knock and talk was valid in part because, “Law enforcement cannot be that handicapped to only be allowed to go to a door the same time a girl scout would go to the door.”

Kent County Undersheriff Michelle LaJoye-Young also told FOX 17 Thursday she stands by the actions of her team in March 2014 stating investigators must work the case when it is active. She added that Van Doorne and Frederick "were absolutely not coerced [into talking], they could have said no."

The defense argues without a warrant police cannot come to your door to talk outside of normal waking hours citing the classic Girl Scout selling cookies example.

“This is a classic example of how not to do a knock and talk: you don’t go with seven officers, who are armed, at 4 in the morning or 5:30 in the morning," said Bruce Block, defense attorney representing Todd Van Doorne. "Time is not irrelevant. Time matters.”

Another question repeatedly addressed Thursday: again, could Van Doorne and Frederick have said 'no' to their bosses, asking them for information early in the morning on their doorsteps? Is their consent that morning valid?

“Let’s go to our scenario here which is our case: It’s 4 in the morning, there’s headlights that are shining into your house; there’s a number of different officers that are now on the premises; they’re wearing tactical gear; they have weapons; and they approach your front door. Do you think that the ordinary citizen in that situation feels that they have an obligation to comply?”

The justices could decide to take the two cases on and issue an opinion any time now through the end of this summer. Or, they could defer to the state's Court of Appeal's decision which upheld this knock and talk as constitutional.