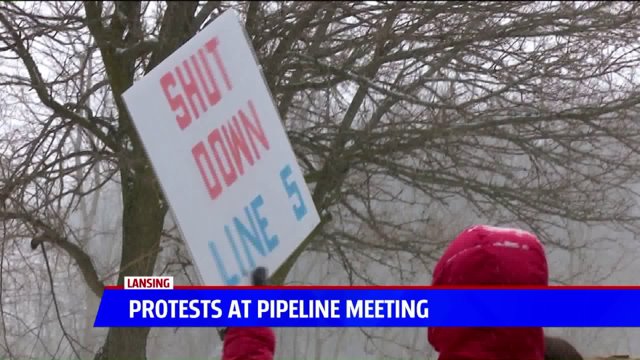 LANSING, Mich. -- About 250 protesters showed up in Lansing at the Pipeline Safety Advisory Board meeting Monday. They expressed concerns about Enbridge Line 5, a major oil pipeline that runs under the Straits of Mackinac.

They said if the 145-mile line were to rupture, it would put all of the Great Lakes at risk.

Environmentalists weren’t just there to protest, they also called on Governor Snyder and Attorney General Bill Schuette to decommission the line. Officials from Enbridge made a presentation that showed how they maintain and inspect the line, including looking for possible corrosion. But they said the exterior material isn’t essential to the pipe’s integrity.

However, Enbridge officials faced hours of questioning from protesters. At times, the Enbridge officials were drowned out. The protesters claimed there should be greater concerns about potential ruptures after recent disclosures about missing coverings and warnings from independent engineers.

"We're calling on Line 5 to be shutdown, because a proper and unbiased test cannot be conducted," Mariah Urueta said. "Enbridge is lying about their own reports."

The Enbridge officials left by a back door with security, but FOX 17 got a chance to talk to them briefly. The company said they are dedicated to making sure their lines are safe, and they’re taking all the appropriate actions.