“Nothing we can’t do”: Facing Parkinson’s through dance 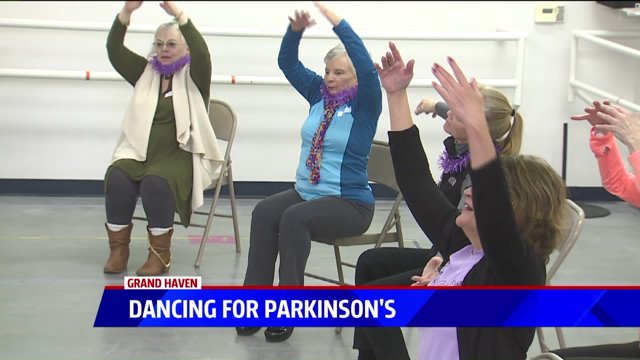 GRAND HAVEN, Mich. – For those with Parkinson’s, sometimes even the simplest of daily activities can become difficult. But for one hour a week, a small but vibrant group is facing it all head on – through dance.

Dancing for PD is an international organization, with over 120 locations around the world. The program offers therapy of the body and mind free of charge for those with the disease. IT a tried and true method that doesn’t seem like treatment, but acts as so much more for those participating.

“We really don’t talk about Parkinson’s disease very much. We’re there to dance,” said Jan White, who founded the Grand Haven chapter. “It’s an hour of the week where I let go of that and it’s just joyful, is the word I keep coming up with."

White, who has Parkinson’s herself, found out about the program while speaking with a friend who participated in a Washington state chapter. Shortly after, White visited her daughter in New York and participated in a class at Dancing for PD flagship location in Brooklyn.

“At that time I wasn’t aware of anything in Michigan,” said White. “I thought ‘wow! This was so cool!’”

The time of Jan and her several other instructors is all done on a volunteer basis. They received their initial funding from the Parkinson's Association of West Michigan to the tune of $5,000 and so far every penny seems to be worth it.

Some, like Connie Farell, have other mobility issues and find the class a helpful tool to get more physical activity, and share a sense of camaraderie with others who are in a similar position.

“I think it’s been successful. I’ve enjoyed and seen a difference,” she said. “I just feel good about myself - that I’ve done something and that I’m safe doing it.”

Currently in West Michigan, Dancing for Parkinson’s has locations in Grand Rapids and Grand Haven. The classes allow participants to move at their own pace, only asking them to participate at their own comfort level.