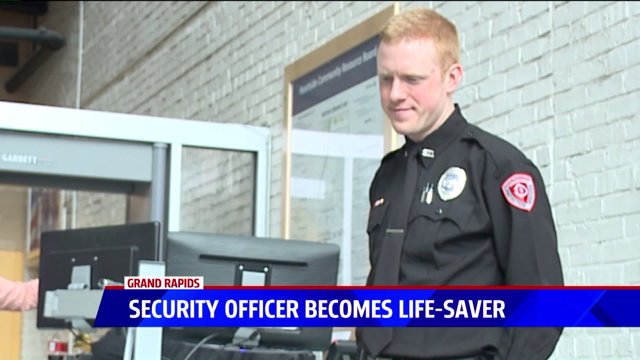 GRAND RAPIDS, Mich. – A Charlesbrook Protection Services security officer is being honored for helping save a man’s life at Mel Trotter Ministries in Grand Rapids.

Ryan Ruffini says he was alerted that a man wasn’t breathing and that he credits his training that helped him through the tense situation. It happened on Feb. 22.

"He didn't appear to be breathing," Ruffini said. "This gentleman was lying on the ground. His shirt was off and his torso was white, and his hands and his face were purple."

Fortunately security officers who work for Charlesbrook are not only trained to protect, they also know how to save lives.

"They are the front lines to be able to respond until a higher level of care can arrive,” says Ryan Woodford, CEO of Charlesbrook Protection Services. “So we know in situations like this, seconds can make a difference."

Ruffini kept the man’s airway clear while a Mel Trotter staff member performed chest compressions. A nurse also came in and administered a shot. It was a group effort that got the man breathing again.

"Every day we don't know the circumstances of the person walking through our door,” says Carol Helsel with Mel Trotter Ministries. “And we want to always be ready, always be ready. You just never know."

In recognition of his actions, Ruffini was given the “Life Saving Award” last week, an honor he now wears on his uniform.

The man who was rescued was taken to the hospital and has since returned to Mel Trotter Ministries.