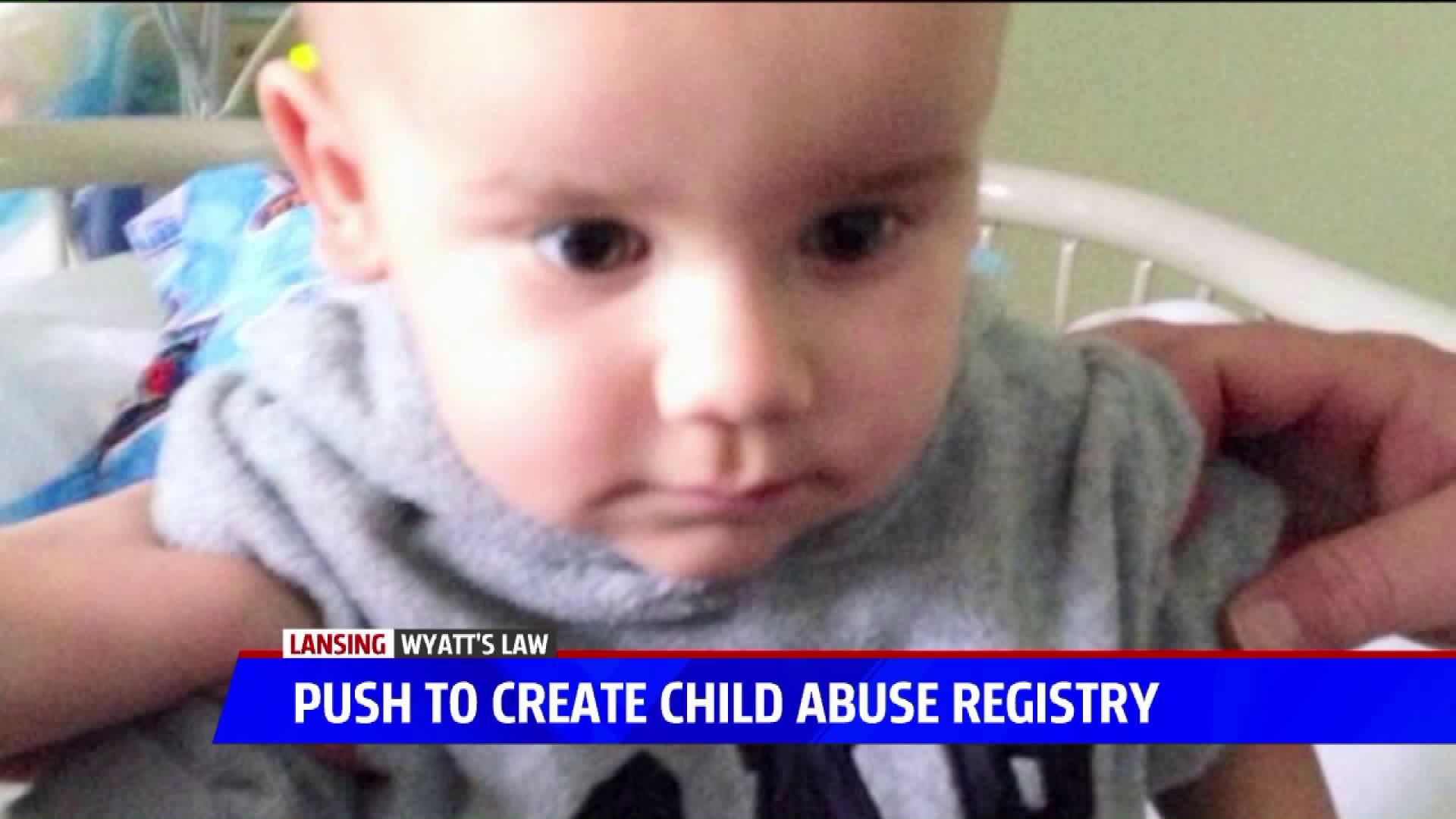 LANSING, Mich. -- Three mothers are pushing for the creation of a Child Abuse Registry, similar to the Sex Offender Registry in Michigan. The series of bills, known as "Wyatt's Law" would lead to that registry's creation, along with enforcement and punishment for convicted criminals who don't register.

The bills are named after Erica Hammel's son Wyatt, who was shaken in 2013 when he was one year old. The little boy suffered multiple injuries, including broken ribs and a bleed on the brain. He's now blind in his left eye.

Hammel says she was suspicious of her ex-husband's girlfriend, Rachel Edwards but was never able to find background information on her.

Edwards was arrested and eventually sentenced to 33 months behind bars after a plea deal.

"I was so enraged. My instincts had been right, and had there been a registry for convicted child abusers, I know this would have never happened to Wyatt. The time she’s serving is not enough time, and unfortunately these sentences and slaps on the wrists are happening with child abuse cases all over the country."

During Tuesday's hearing, Christyne Kadlitz spoke about her son, Travis, who was also abused by Edwards during visits to the home she shared with Kadlitz's ex-husband.

"On one occasion, my son, who was just three at the time, came home from a visit and was walking funny, holding his crotch area like it was bothering him," Kadlitz testified on Tuesday. "I took him into the bathroom to find my son had one of Rachel’s son's baby bottle nipples over his penis and [testicles] and paper shoved in his butt crack. I was really disturbed and called his father to confront him on it. Travis tried saying our son had done it to himself.  As a mother, I knew otherwise and denied visitations."

Kadlitz's son was also given Seroquel, a manic bipolar medication, forced to drink soap out of a cup, and slapped so hard it left welts on his body.

For those crimes, Edwards was put on probation and ordered to pay fines.

"The most important role that government has is to protect the most vulnerable and this bill certainly does that," said Democratic State Senator Curtis Hertel Jr. during Tuesday's Senate Judiciary Committee hearing. Hertel is one of the sponsors of the Wyatt's Law bills, said it's the government's responsibility to pass it.

Hertel said there have been 1,200 convictions for child abuse in Michigan in the past three years.

There was no vote during Tuesday's committee meeting, but a vote is expected in the near future.

Hammel has created an online petition in support of a child abuse registry in Michigan. It currently has more than 23,000 signatures.