Man sentenced to jail time for passing out pamphlets outside courthouse 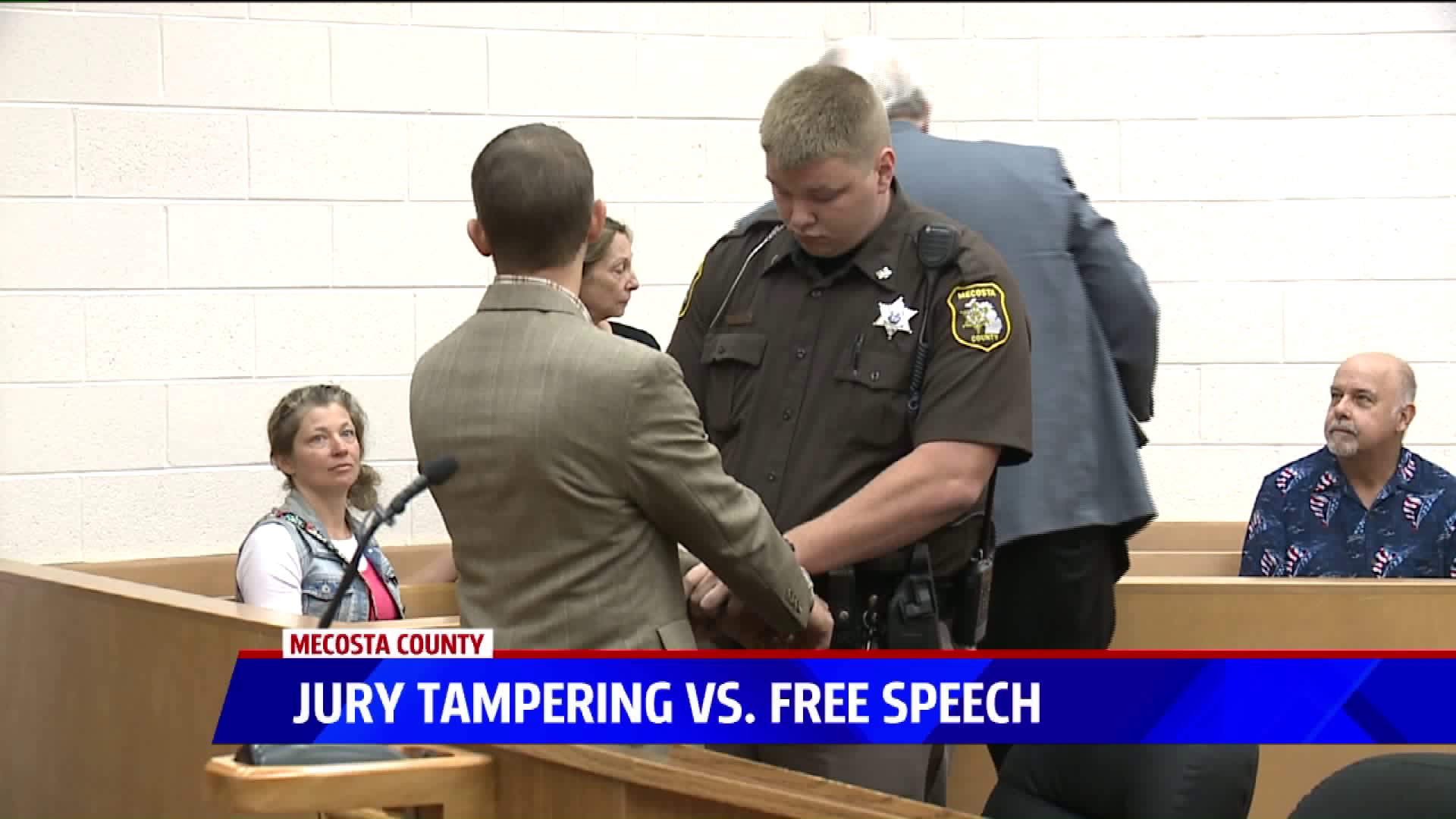 BIG RAPIDS, Mich. — A man convicted of jury tampering, after passing out pamphlets on a sidewalk in front of the Mecosta County courthouse, was sentenced to eight weekends in jail and six months of probation plus fines.

UPDATE: Isabella County judge issued stay on Keith Wood's sentence Friday during an emergency hearing: Wood is out on bond as this judge hears his appeal.

Last month, a jury of six found Keith Wood guilty convicting him of attempting to influence a jury in Mecosta County. Wood is a former pastor and father of eight who was initially charged with a five-year felony for obstructing justice and the one-year misdemeanor jury tampering.

Friday the prosecution advocated 45 days in jail plus fines, but the defense said jail time is inappropriate for Wood: he has no prior criminal record, is self-employed and the sole financial supporter for his wife and eight young children. District Judge Kimberly Booher said while she didn't believe 45 consecutive days in jail is appropriate, she said no jail was also inappropriate.

"He's going straight to jail today," said Judge Booher, before Wood was handcuffed and escorted out of the courtroom.

Judge Booher sentenced Wood to eight consecutive weekends in jail, with 120 hours of community service suspended if Wood completes six months probation. She also denied the defense's motion to stay Wood's sentence pending appeal, as the defense is appealing to the Mecosta County Circuit Court and then the Michigan Court of Appeals if necessary.

Before he was sentenced, Mecosta County Assistant Prosecutor Nathan Hull argued despite Wood's clean criminal record, Wood knew what he was doing was wrong by showing up to pass out fliers the day another trial was scheduled.

"This is not a person who made a one-time mistake, he hasn’t demonstrated that he has kind of shown that he realizes now the significance of what he’s done, in fact the testimony shows the contrary," said Hull.

Following Hull's push for 45 days in jail, Wood's defense attorney David Kallman argued Wood was only trying to educate the public, and believed a trial likely would not happen that day in November 2015. Kallman said any jail time, let alone the conviction, violates Wood's right to free speech.

“He exercised what he believes are his free speech rights, did it out on the sidewalk before this court, and that because of that, that deserves 45 days in jail, let alone one day in jail?" said Kallman. "I totally disagree with that.”

During his trial, Wood testified that Mecosta County District Judge Peter Jaklevic ordered his arrest Nov. 24, 2015 moments after Wood handed out about 50 juror rights pamphlets on the public sidewalk outside the courthouse.

It's a case FOX 17's Dana Chicklas broke in December 2015 that made national headlines. Wood’s bond was set at $150,000. Then, his felony charge was dropped last March and he was on trial for attempting to influence a jury.

Wood says he ordered the pamphlets from the Fully Informed Jury Association, which wrote about juror rights “judges don’t tell you.” Specifically, the fliers discussed the debated juror’s right to vote their conscience or jury nullification.

When Wood was first charged he spoke exclusively on camera to FOX 17 and said, "I truly believe in my heart of hearts I didn't do anything wrong, I didn't break the law."

After he was convicted in June, when FOX 17 asked how he feels his First Amendment rights were impacted, Wood answered, “Oh, I don’t feel like I have them.”

Wood also testified he learned of the case against Andy Yoder, scheduled for trial the day of his arrest on Nov. 24, 2015, through an email blast. He said he does not know Yoder, but was interested in the idea that the government had a say in someone's private property rights. In that case, Yoder was accused of violating the Department of Environmental Quality for draining a wetland that was on Yoder's property.

When Wood learned of that case he says he went to Yoder's pre-trial conference, then ordered the pamphlets and went to the courthouse the day Yoder's trial was scheduled. Yoder is an Amish man and when asked by the jury, Wood testified he has no ties to the Amish community other than buying produce from them locally.

Also, the day of Yoder’s trial when Wood passed out pamphlets, no jury was seated and Yoder took a plea deal.

After Wood’s trial, his defense attorney David Kallman told FOX 17 he would appeal his guilty verdict.