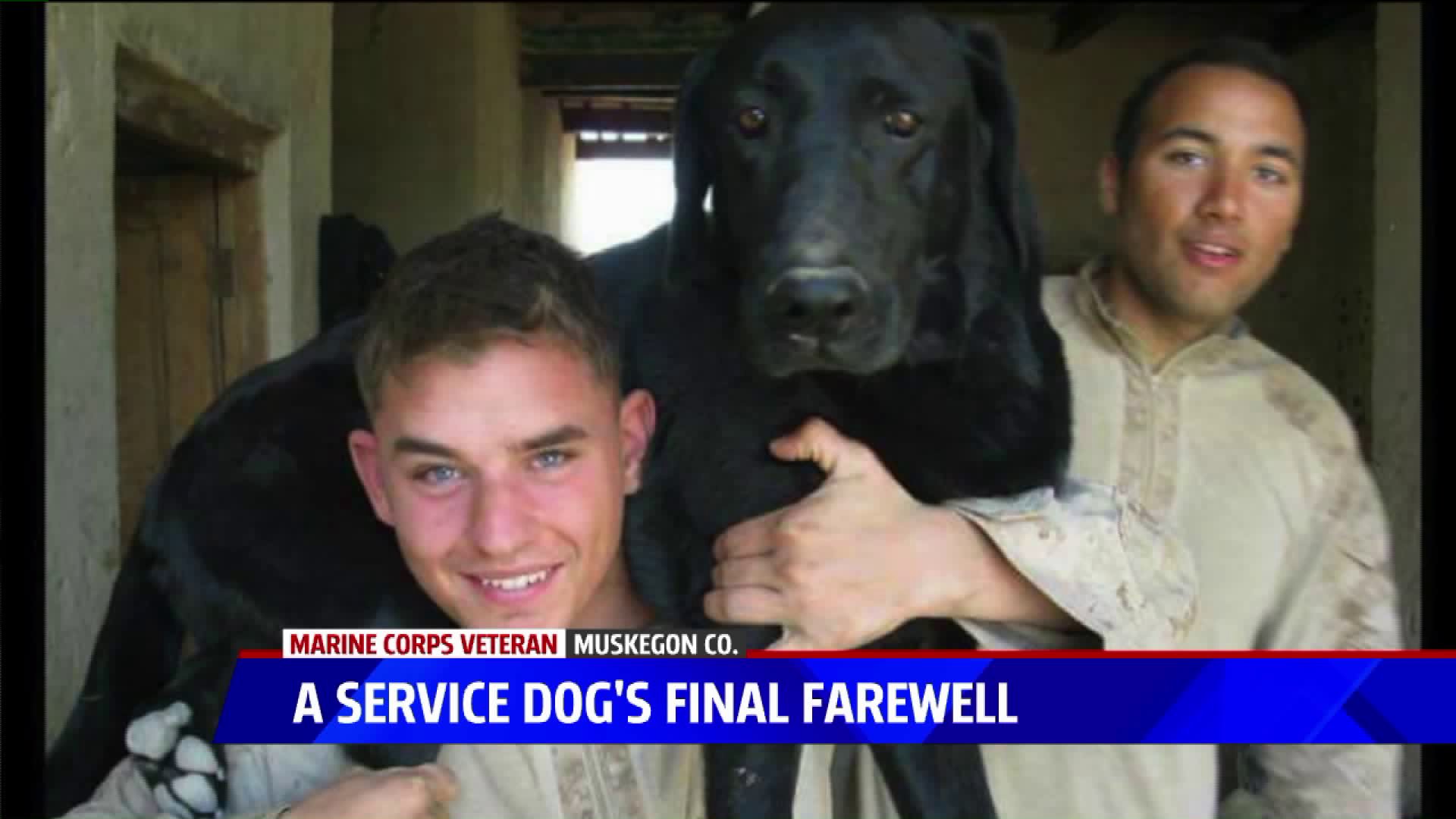 MUSKEGON HEIGHTS, Mich. -- It's the final mission for a Marine Corps veteran and his bomb dog.

Corporal Jeff DeYoung deployed to Afghanistan with his bomb detecting dog, Cena. In 2014, Jeff was able to adopt Cena as his own, eventually becoming his service dog as he battled with PTSD.

Just a few days ago, Jeff found out Cena has bone cancer.  He put together a bucket list for Cena for his final weeks.

Everyone knows the expression dogs are a man's best friend, but that doesn't come close to describing the relationship between this Marine and his dog.  Jeff and Cena have been to war and back and saved each other's lives in every sense of the phrase. Now, Jeff has a few things he wants to do before saying goodbye to Cena.

It was a match from the very beginning.

DeYoung was a combat engineer tasked with locating IEDs along with Cena.

"My primary job with Cena was to walk out in front of an infantry unit and patrol the roadway and surrounding areas for IEDs that were threats to the local troops in the area," said DeYoung.

The team was deployed to Afghanistan in 2009 and were there for the Battle of Marjah. At just 19 years old, Jeff's fate would be in the hands of a dog.

The duo built trust with each other very quickly because their lives would depend on it.

"Our first day inside the city of Marjah we were clearing an already tilled over corn field," said DeYoung. "The sun was coming up with the village in front of us so the sun was hitting our eyes. The moment the sun peaked over those buildings we took contact. We took machine gun fire from three separate places and I laid on top of Cena and hooked his collar to my flack jacket and laid on him until the threat was neutralized."

Cena would do two more tours of Afghanistan with different handlers. Jeff eventually retired from the Marine Corps in 2013. That's when his battle with post-traumatic stress would begin.

"They teach you how to put a uniform on, but they don't tell you how to take it off," said DeYoung.

In 2014, Jeff was able to adopt Cena as his own. Eventually, Jeff made Cena his service dog.

"I started noticing that going out in public was easier, less anxious, I could do more things when I had him once again by my side," said DeYoung.

It was last Sunday when Jeff noticed Cena wasn't putting any weight on his back leg. A visit to the vet would confirm the worst.

"The doctor and the oncologist had very strong suspicions it was bone cancer," said DeYoung. "I reached out to a few other vets and again, the same correlations and the same concerns."

It was news that shook Jeff to his core.

"To be frank, I hid under the desk in the vet's office, I threw my phone against the wall and the vet had to leave the room until I could compose myself," said DeYoung.

Doctors are giving Cena just a few weeks to live.

"I have to tell myself that every day and every day it's just as hard," said DeYoung.

In their time left together, Jeff has created a bucket list. At the top is a ride in an open top Jeep with his buddy. He's hoping someone with a Jeep Wrangler or a dealership will donate one for one day.

"I want to go for a ride in a Jeep Wrangler with the top off, surrounded by green trees and my dog by me," said DeYoung. "Just one last good day."

When that day comes, Jeff hopes military members and police will be there for a hand salute.

"I think a hand salute as he's heading into the vet would be a tremendous sign of respect from the community," said DeYoung.

All this before he puts his best friend in an ammo can as his final resting place.

"We walked in front of the group that we served with and everything that they faced we faced first," said DeYoung. "Overseas it was me and him against the world."

DeYoung has a Go Fund Me page set up for donations to help build a headstone for Cena. They're also working to get Cena buried at the war dog memorial in Lyons, Mich., which is donation-based.

Cena's third handler also lives in Washington state, so they're trying to fly him out to Michigan to say goodbye to Cena one last time.