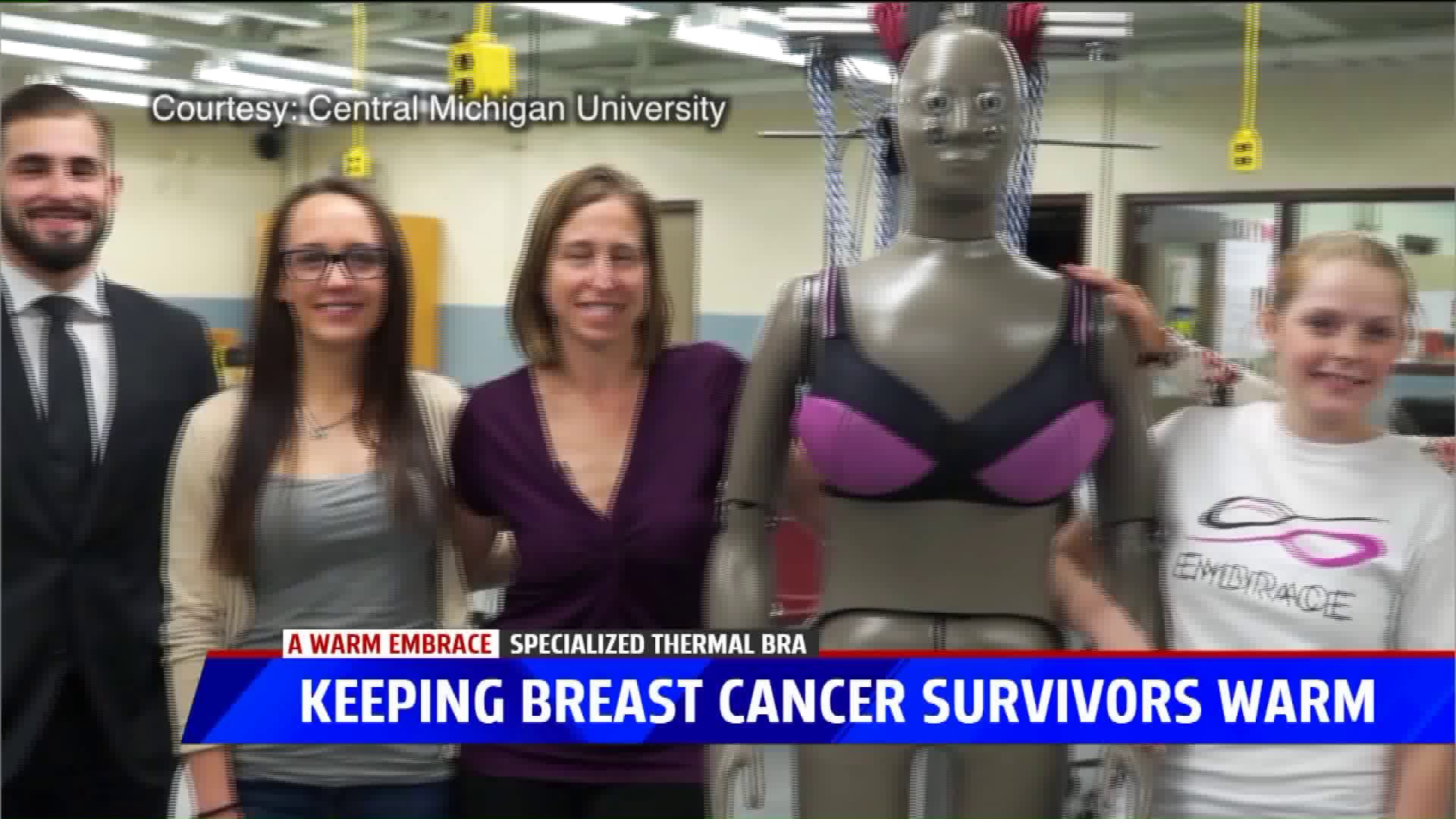 Jodie Faber has used her experience to help others like her.

Faber, who is the director of Spectrum Health United Lifestyles, was diagnosed with breast cancer in 2005 and eventually had a double mastectomy.

It was a couple of years after her procedure and reconstructive surgery that she noticed her breasts were freezing while she was swimming in Traverse City, but she didn't realize it until she physically touched them.

"They were very, very cold, and my whole core was cold," Faber told FOX 17. "When you have a mastectomy, your tissue is removed,  and your ability to generate heat is removed because the blood supply is gone. Your nerve endings are gone.”

After having ongoing issues with her body temperature, Faber spoke to her plastic surgeon, who recommended putting hand warmers in her bra. However, that eventually led to more issues. "When I took them out, I noticed that I had burned my breasts because the hand warmers were so hot on the skin and I couldn’t feel it," Faber said.

After doing research online, Faber realized other women like her had also been burned by hand warmers, so she began looking for other options. One day while at work, she read about Spectrum Health Innovations , a program that encourages employees to come up with ideas and solutions to benefit their patients and the community as a whole.

"I was talking to my daughter about it and she said, ‘Wouldn’t it be great if they could invent some kind of a bra that could keep the cold out?’ I thought, 'Oh that would be a great idea,'" said Faber.

That idea ended up involving students from Central Michigan University , who collaborated with Faber to come up with a specially-designed bra to help keep women's breasts warm following double mastectomies and reconstructive surgery.

Faber says there were a few trial and error phases before finding the perfect design. "They wanted to use batteries and wires in some kind of an apparatus for me to wear," Faber said of one design. "The whole way through, the only thing I wanted to do was feel normal. Every day I would get out of the shower, and look in the mirror, and there is nothing normal about a double mastectomy. I’m constantly reminded of it. The last thing I wanted was to put on an apparatus that has batteries and wires in it."

In the end, Faber and the students came up with a specially-insulated bra that holds in heat, keeping the chest warm throughout the day.

"I’m proud that we’ve come up with a solution for this problem," says Faber. "But I’m more humbled by the experience, because so many different people from so many different walks of life have engaged in this process."

The product is now in the testing phase. Spectrum Health Innovations is looking for women between the ages of 45 and 65 who have undergone double mastectomies and reconstructive surgery to try out the bras.

"See if they’re functionable and if they actually work, and just what their overall opinion is so we can learn more before we get into our production-ready bras," says Anthony Laczaro, a product development specialist with Spectrum Health Innovations.

They're hoping to have the testing done by early 2018 and will then look at introducing the bra in the market.

Those involved in the project hope to make the bra cost about the same as regular ones, so people who need them will be able to have access to the product.