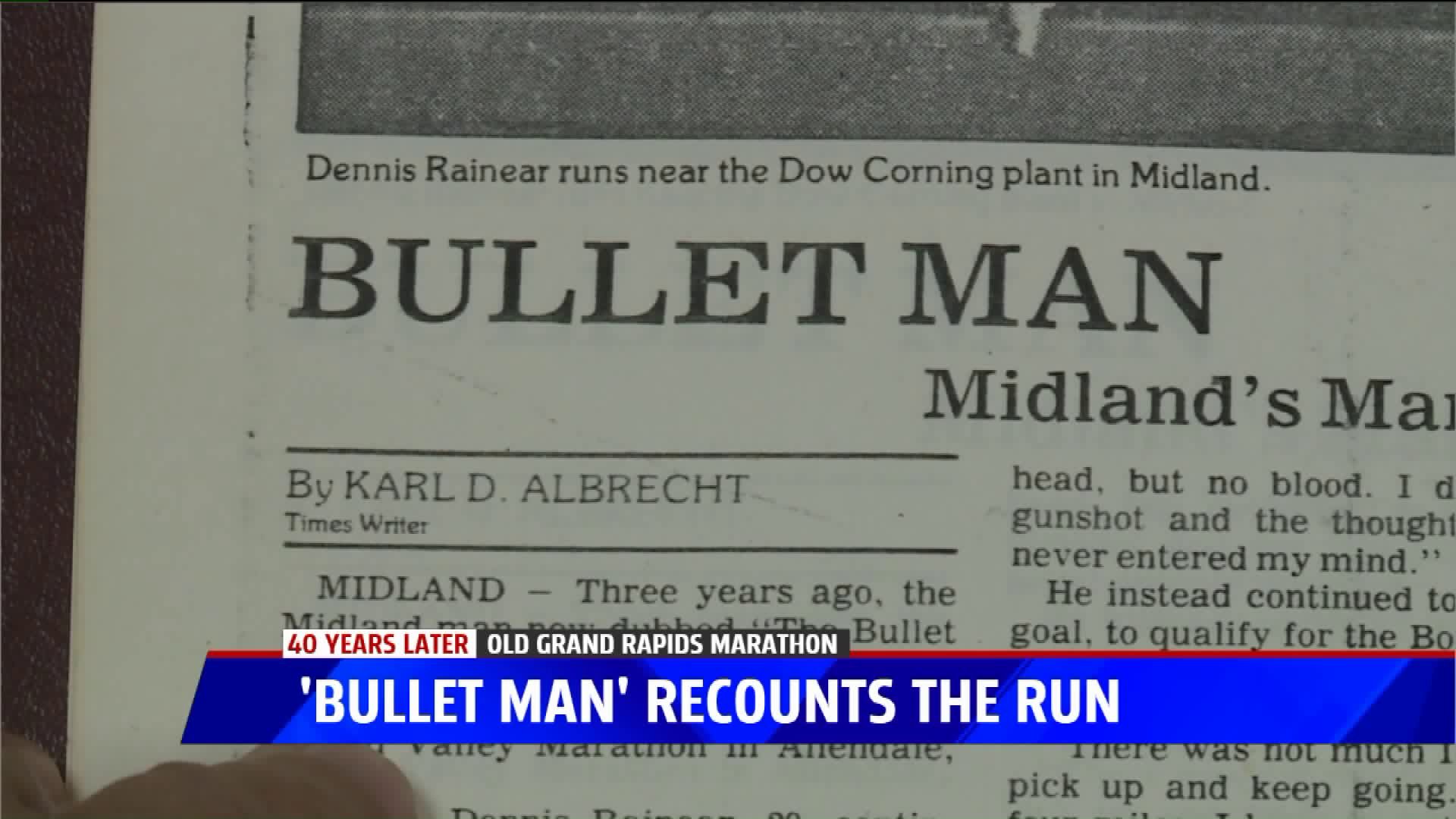 RICHMOND, Va. – As the city prepares for the 40th annual running of the Fifth/Third Riverbank Run, another race is celebrating its anniversary – the race that bore the legend of Bullet Man.

On November 4th, 1978, a then-26-year-old Dennis Rainer was attempting to qualify for the Boston Marathon via the old Grand Rapids marathon. Much of the course wound its way through rural areas near Grand Valley State’s campus, and as Rainer approached the ten mile mark, he was unexpectedly knocked to the ground.

“I literally got knocked off my feet,” said Rainer. “It pitched my forward. Almost hit the ground.”

At first, Rainer thought it was a rock or brick thrown by spectators – maybe kids. He did a quick self-check, realized he was alright, and kept running.

“Didn’t even occur to me to stop. I just looked around and [kept] going.”

Rainer finished the remaining 16-miles and met his wife. Together, the two went to the medical tent to get checked out. Rainer even grabbed a hot dog on the way. It didn’t take doctors long to see the problem.

“Finally he said, you know I don’t know, but I think you’ve been shot,” Rainer recalled the doctor telling him. “I suddenly got real nervous, real sick and thought ‘that explains a lot if that’s what really happened.’”

And it was. At Butterworth Hospital later, doctors found a .22 caliber slug lodged in the upper part of Rainer’s skull.

Amazingly, he was fine. The bullet was removed, and Rainer was released from the hospital. But his woes weren’t over – he had still failed to hit the qualifying time for Boston…until his story went public.

“Within an hour, the phone started ringing and didn’t stop ringing for like three days,” he said. “I suddenly became bullet man, and it was a lot of fun.”

One of the calls was from the race directors in Boston. They offered him a spot in the 1979 race, despite his time in the Grand Rapids race.

“I don’t know if I could have ever achieved those without the motivation from the bullet man incident.” He said. “I think this is gonna be on my tombstone, don’t you?”

Maybe, but not yet.