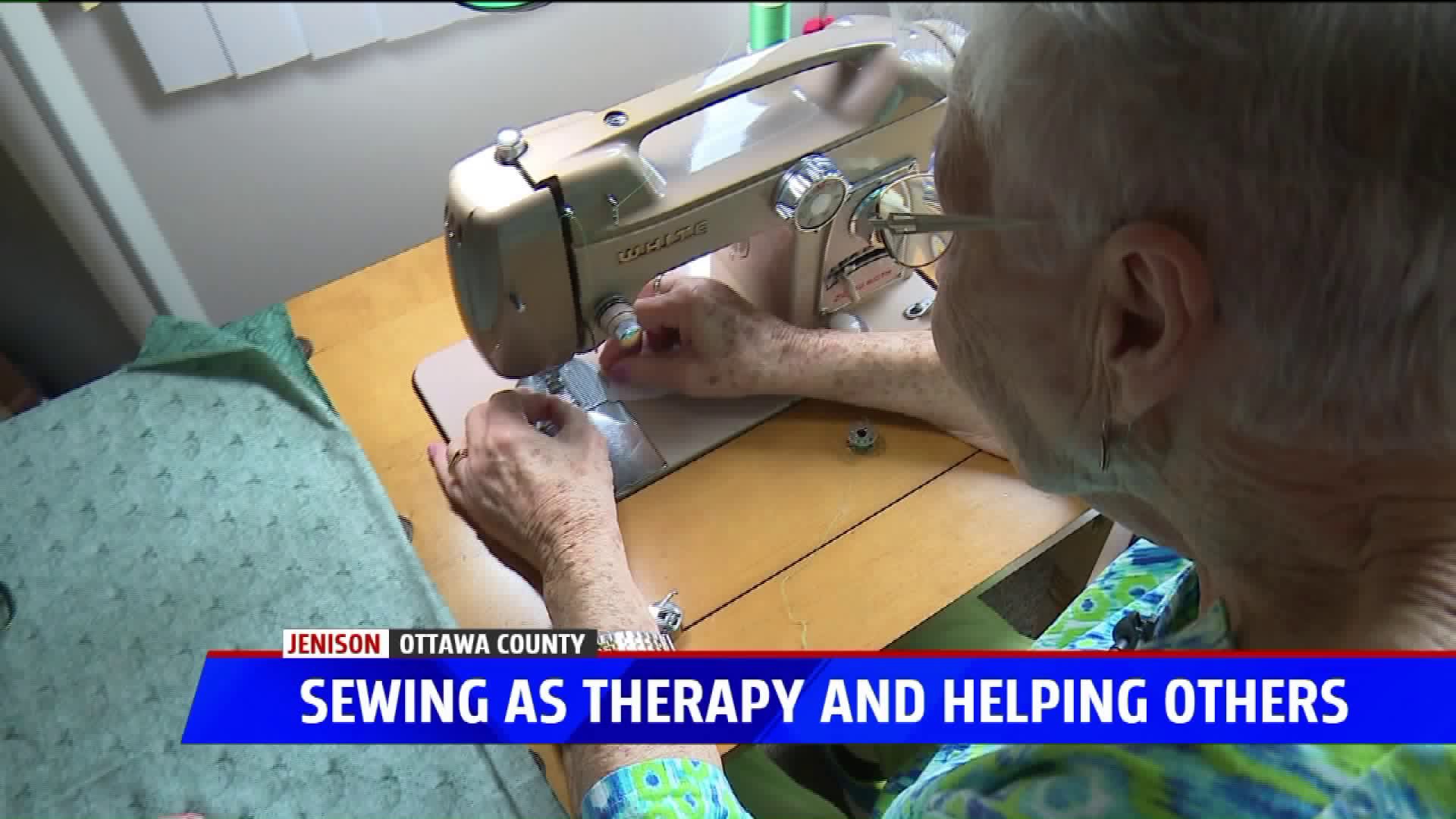 JENISON, Mich. -- An 80-year old woman in Ottawa County isn't letting her cancer get in the way of helping others. While battling the disease, she's been sewing dresses for little girls across the globe.

Bonnie Elzinga has never been one to just sit still. Even when she was diagnosed with ovarian cancer six years ago, it never kept her from doing what she loves.

Her sewing machine is old, considered ancient by some. It's a hand-me-down from Elzinga's mother many years ago.

“I feel like I’m accomplishing something," said Bonnie, as she sits at her sewing machine.

The 80-year-old spends her days at the American House Senior Living Center in Jenison. Oftentimes she's sitting at her mother's old sewing machine.

“It’s just something I can do and I love doing it" said Elzinga.

Bonnie was diagnosed with ovarian cancer in 2012.

“I had surgeries and chemotherapy and lost all my hair I think maybe three or four times. I lost all my hair and maybe six rounds of chemotherapy at different times," said Elzinga. "The doctors decided I had had enough and there wasn’t anything that they would try to do, they had done everything they could for me.”

Last year, the doctors put a halt to the treatments. Bonnie decided to start a new form of therapy.

“I decided that I just can’t sit around, I’ve never sat around and been idle my whole life," said Elzinga. "I thought well they’re still making dresses, I’ll make dresses.”

Since last year, Bonnie has made more than 100 dresses for little girls in Guatemala, Mexico and parts of Africa. So far this year, she's already on track to top that number.

“I just think they’re just adorable and any little girl anywhere would love one," said Elzinga.

Stitch by stitch, adding a ruffle here or a pocket there, Bonnie's dedicating the time she has left to helping others.

“I don’t think I’m the world’s savior or anything like that, I benefit more probably than the little kids that get the dresses," said Elzinga. "It keeps me busy, I don’t have to sit and think, 'Well gee I got cancer, poor Bonnie. I’m not going to get better. You just sit in your chair and feel sorry for yourself'. I’m not that type of a person. I think there’s more important things that I can do that, and I love to do it. It’s not that it’s a chore or really hard work.”

The dresses are sent along with mission trips around the world with groups from local churches. This is just one of many projects Bonnie has done for others over the years. She's also knitted hats for chemotherapy patients and made mittens for little kids in need.