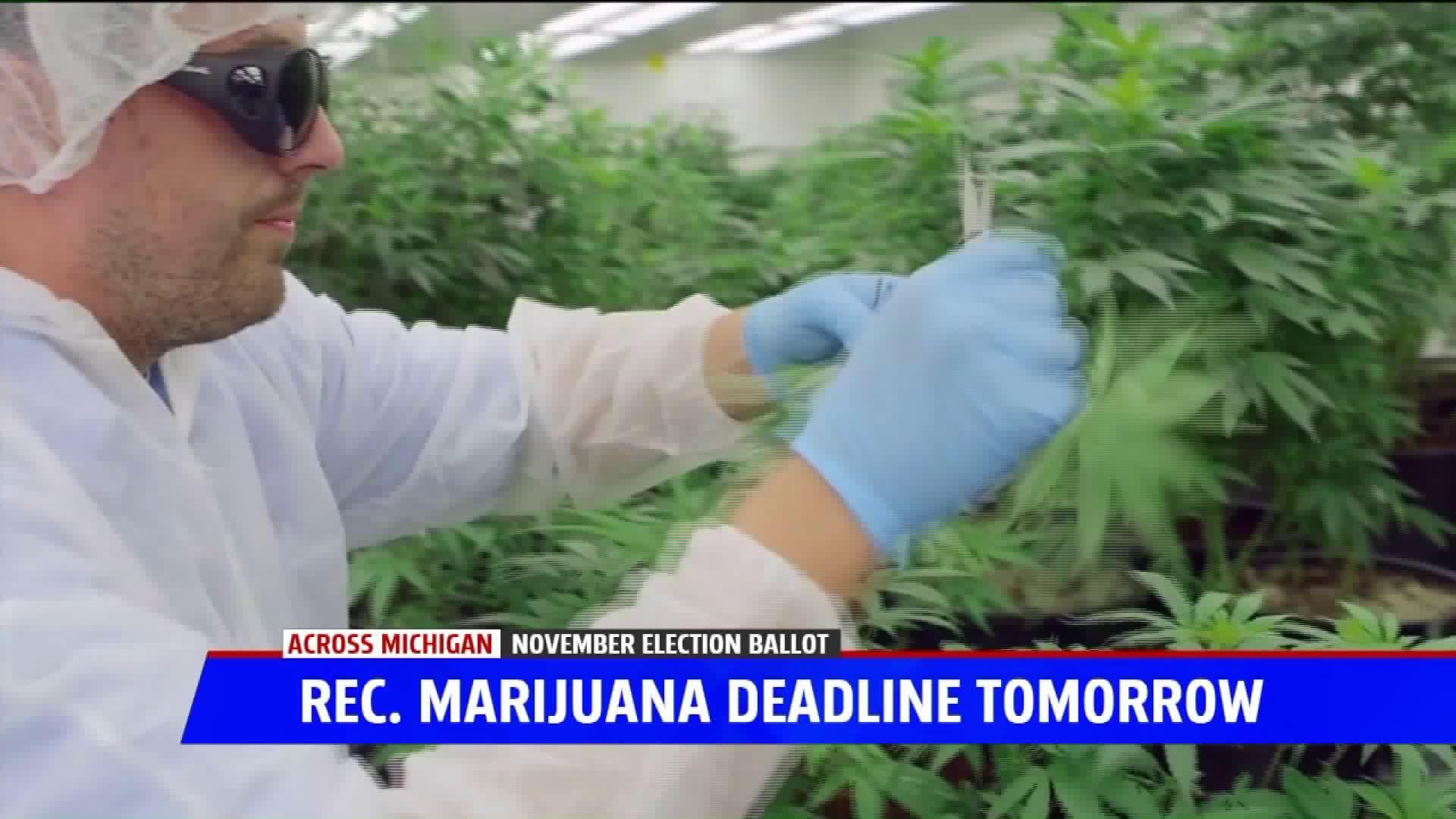 LANSING, Mich.-- Recreational marijuana will likely become legal in Michigan for people 21 years of age and older. What's not certain however, are the strings that could be attached to the initiative depending on how State Republicans act by midnight on Tuesday.

More than a quarter-million signatures petitioning the legalization of recreational marijuana are forcing the Republican-led State Legislature to act. They can either pass it themselves by midnight on Tuesday, or reject it or do nothing, which would put the initiative on the ballot in November and be left up to voters.

“At this point, I think that it’s best to leave it to the people," State Senator Curtis Hertel (D) tells FOX 17.

Hertel supports the legalization of recreational marijuana but he says he'd rather see it go to the ballot.

Several polls from EPIC-MRA and Victory Phones show that Michigan voters would likely vote "yes" to legalizing recreational marijuana. If the voters pass it, the legislators would need the support of a two-thirds majority to amend the law.

If the State Legislature approves it on Tuesday, they can amend the law more easily since they would only need a simple majority's support, which is exactly what some Republicans, even those who oppose recreational marijuana, want to happen.

“I would prefer that the Legislature should pass the recreational marijuana," State Senator Rick Jones (R) tells FOX 17. "I have been against it all my life, I’m a former police officer of 31 years, but all the polling shows it’s going to win overwhelmingly and the big difference is that if we pass it, then we can control it with simple majority.”

Hertel says he's even heard talk of adding an enactment clause, meaning it wouldn't go into effect until the federal government legalizes it.

“That’s not what the framers of our Constitution intended when they put this in," Hertel says. "I think it would be a big mistake for the Legislature to act at this point and it should go on the ballot and the people should decide.”

Hertel says he's also skeptical about Republicans' intentions to use this potential vote to impact the November election. He says he believes rumors that Republicans may pass the initiative just to give Democrats one less reason to vote in November and elect more Democrats into office.

“Their intention is all about the politics, and the people’s will should be more important than politics," Hertel says.

State Senator Tommy Brann (R), who is also a bar owner, says he has genuine concerns about the legalization of recreational marijuana. He says he worries enough about irresponsible alcohol use and doesn't want to see marijuana easily abused as well.

“Everybody makes mistakes in life with drinking and that’s sad," Brann tells FOX 17. "I think marijuana, the thing that worries me most about marijuana if it goes into a higher drug, that’s my biggest concern.”

The initiative to legalize recreational marijuana also includes various taxes, some of which would go to local governments, K-12 education and repairing roads and bridges. This topic was brought up at the Mackinac Policy Conference Bipartisan Gubernatorial Debate.

Democrat Abdul El-Sayed says this issue has become one of civil rights. During the debate he said that African-Americans are more likely to be incarcerated for marijuana possession, despite no higher likelihood of use.

“It is the reason why we have brimming jails and we don’t have the means of investing in our schools and so, we’ve got to legalize,” El-Sayed says.

Lieutenant Governor Brian Calley (R) said during the debate that he opposes the legalization of recreational marijuana but if voter's approve it, he will respect the outcome.

The initiative would also legalize industrial hemp and allow for municipalities to ban or limit marijuana establishments.