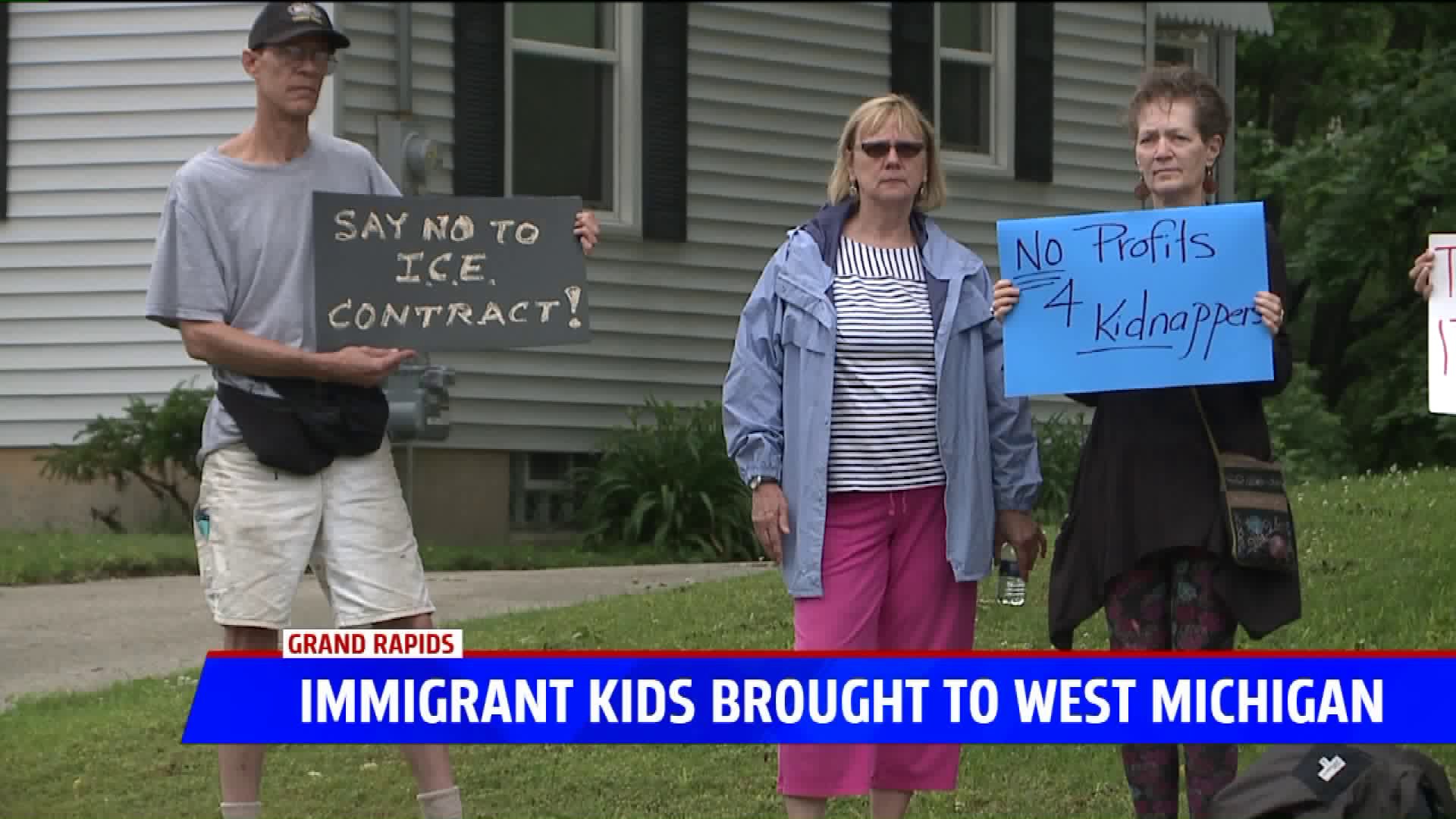 GRAND RAPIDS, Mich. -- Amid a constantly changing crisis, the administration's zero tolerance immigration policy is heart wrenching to people across party lines, as children from Central America and Mexico up until Wednesday were separated from their families crossing the Mexican border and put into detention centers and cages.

At least 81 children separated from their families at the border recently are now in foster care homes and group placements throughout Michigan, according to Dona Abbott, Bethany Christian Services ' director of refugee and foster care programs. On Wednesday, protesters lined the sidewalks along Bethany's parking lot at 901 Eastern Ave NE. Many said they're concerned or livid and urged Bethany to stop accepting children who are separated from their parents at the border. They held signs that read, "No profit for kidnappers," and "End the contract."

"Sending kids all the way across the country from their parents as we strip them of their human and civil rights, and, as we know, that’s what’s happening. We can’t enable it," said Katy Steele Barone, organizer with Our Revolution GR and candidate for Kent County Commission. "Any action we take to help further this agenda makes us a part of the problem."

Abbott says Bethany is against this zero tolerance policy but will accept the children to provide services and care. "I don’t think children ever should be used as a way of making a point," she said.

When FOX 17 asked why is Bethany accepting the kids, Abbott said, in part, "Very fair question. It’s because we believe that these children will be separated. That’s a decision that has been made. Iit’s been announced the zero tolerance policy, and we believe children should be in family. If the government’s going to choose to do that, then children need to be protected and cared for."

It costs an adoptive parent at least $28,000 in nonrefundable fees to adopt a child from the U.S. from Bethany, According to Bethany’s 2016 domestic infant adoption fee schedule. Critics ask if Bethany is financially motivated to accept children separated at the border from their parents?

"I believe that Bethany is a privatized corporation that is making money off of every refugee that they take in," said Steele Barone. "And I believe that they’re going to reinvest that into their nonprofit corporation, which is in turn lobbying against things like LGBTQ rights to adopt and against us stopping separating families."

Meanwhile, the amended Michigan Child Care Licensing Act allows Bethany to deny services if a family conflicts with Bethany’s religious beliefs. For example, past Michigan cases show Bethany has worked against reunification or adoption to parents who were non-Christian, LGBTQ, or legal medical marijuana patients.

However, Abbott said the organization is working to reunite families of separated immigrant children. FOX 17 specifically asked if Bethany will work to reunify these refugee kids with their parents if their parents don’t meet Bethany’s religious standards, or if their parents are charged criminally or deported. "It is always our goal to reunite children and families," said Abbott. "It isn’t our intention to see these children placed for adoption or be permanently separated from their families."

Michigan Department of Health and Human Services officials tell FOX 17 only private agencies who contract through the federal government are accepting separated immigrant children in Michigan, including Bethany Christian Services and Samaritas .

Michigan Samaritas VP of Child and Family Services Lena Wilson tells FOX 17 her organization is not currently accepting children but fostered one child who was separated at the border but reunited that child with its family in May. Wilson says Samaritas made a proposal to the U.S. Office of Refugee Resettlement to foster up to 60 additional children who had been separated at the border, but Samaritas won't know until mid-July whether they will be permitted to do so.

This raises another question: What happens if these children cannot be reunited with their families? Abbott says Bethany is fostering children from El Salvador, Honduras, Guatemala, and few children from Mexico. According to the U.S. Department of State, these countries either do not currently allow adoptions with the U.S. or adoptions with the U.S. are rarely achieved. Will these children remain in foster care until they are 18 years old? That question has yet to be answered.