Schuette confident ahead of primary, calls opponents ‘desperate’ during stop in Grand Rapids 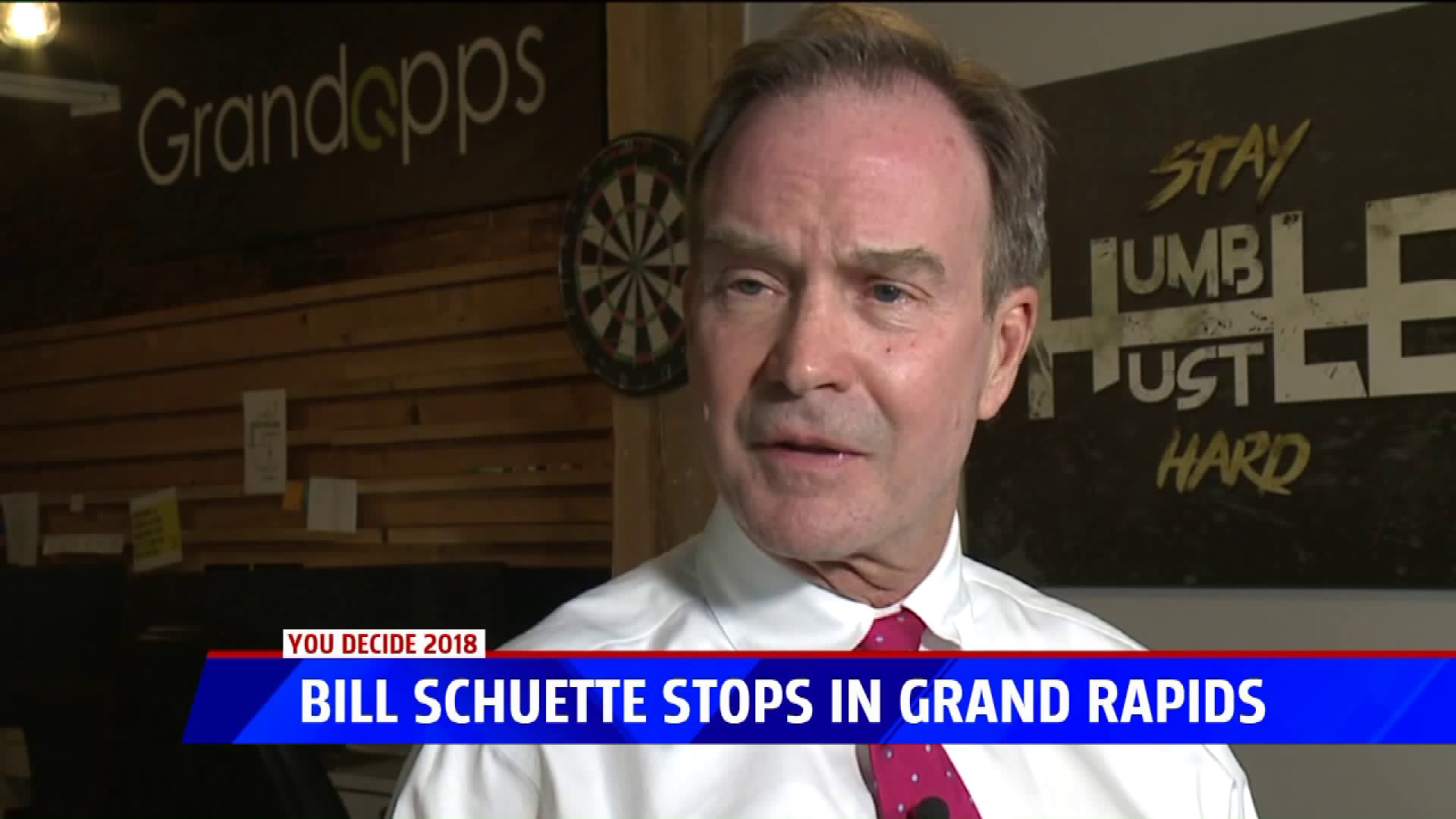 GRAND RAPIDS, Mich.-- In a campaign stop at a tech company in downtown Grand Rapids on Monday, Republican gubernatorial candidate and Attorney General Bill Schuette says he's confident about winning the primary election and that he stands by President Trump despite a controversial couple weeks.

“Eight days left to go before the primary, and I’m ahead. I’m gonna keep it that way," Schuette says. "I've got a lot of desperate opponents that are behind, desperately behind, but I take nothing for granted.”

Schuette made the stop at Grand Apps, a tech company he says serves as an example for Michigan's economic future. The stop was part of his "Time to Win Again" tour.

“This is a place that’s creative high-tech, and it’s part of the whole future of Michigan of more jobs and bigger paychecks," Schuette says.

Earlier in his campaign, Schuette got the endorsement of President Trump and Vice President Pence.

When asked if he supports the president's willingness to shut down the government, Schuette dodged the question and said he appreciates the president's endorsement. In a press conference with the Italian prime minister on Monday afternoon, President Trump said he would "have no problem" shutting down the government if Democrats in Congress don't pass a budget that uses taxpayer money to fund the border wall, despite Trump's promise that Mexico will pay for it.

Schuette also says he's not worried about the White House's Office of Management and Budget projection that the federal deficit will reach $1 trillion by 2019.

On Monday, Schuette was the target of attacks from Democrats who said his policies would take healthcare away from thousands of Michiganders.

“We need to have Medicaid work requirements, and the federal government should block grant funds to states and let states design their own healthcare. That’s really the recipe for success in the future," Schuette says.

On Monday, he spared no attacks against the Democrats running for governor. He said he thinks either Gretchen Whitmer or Abdul El-Sayed will win the nomination on August 7.

“I mean the Democrat party is  it’s Weekend at Bernie’s. "It’s kind of funny to watch," Schuette says.

Despite a tense Republican primary, especially between Lt. Governor Brian Calley and himself, Schuette says he's confident Republicans can unite for the general election in November.

“I’m an adult. I think everyone else will be an adult," Schuette says.