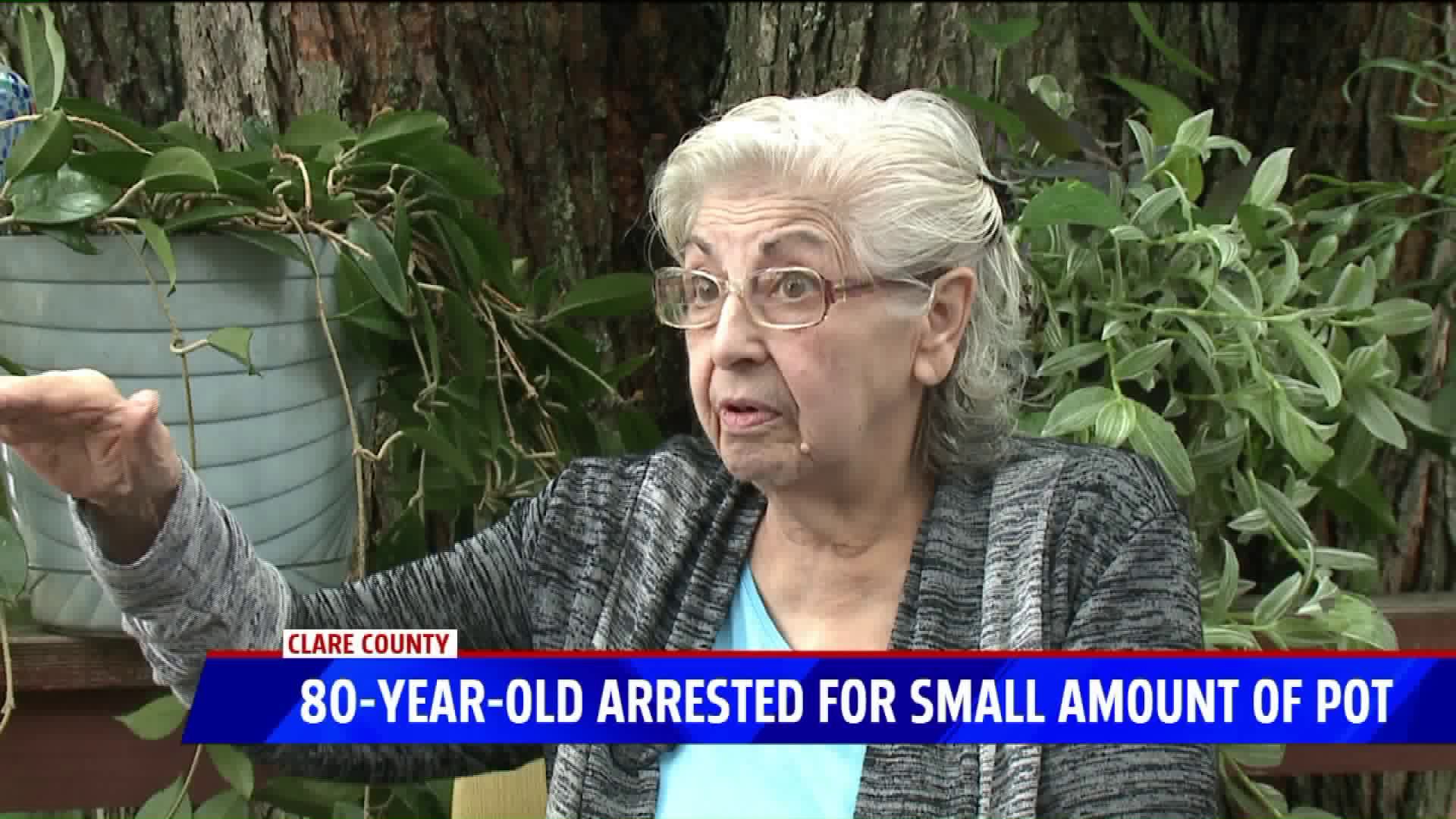 CLARE COUNTY, Mich. -- An 80-year-old grandmother in Clare County was jailed for the first time in her life, because she had a small amount of cannabis at home but her Michigan medical marijuana card expired.

Delores Saltzman and her son Mark tell FOX 17 cannabis saved her life: it worked up her appetite when she was sick; helped her heal after surgeries; and eases her pain from ongoing health conditions. They are disturbed a deputy jailed her overnight for using her medicine.

This November, Saltzman turns 81. She lives with arthritis, diverticulitis, muscle and bone aches, but she says cannabis keeps her moving and making art.

"This is the little paper I work with," she said showing the camera, "it’s called quilling."

"[Cannabis] saved my life because I had a bad bleed about four years ago, and Mark took care of me," adding when doctors prescribed her opioids, it caused stomach pains and vomiting.

"[The deputy] asked whose it was, correct?" Mark Saltzman asked his mother.

"Right, and I told her it was mine," Saltzman said, explaining she was honest with the deputy.

"[The deputy] came in and kind of frustrated you; remember how you were telling me that your anxiety went up off the roof?" Mark asked his mother, to which she said, "Way up."

Court records show the deputy seized: several pipes, four joints and one purple jar with an undisclosed amount of cannabis. When FOX 17 asked Saltzman how much marijuana she had, she explained it was less than an eighth of an ounce.

Saltzman also says the deputy searched her bedroom, took pictures, even helped her clean up her kitchen.

Then, court records show Saltzman was handcuffed in the patrol car. She says the deputy did not read her rights to her, and she was escorted to jail for the night.

"That’s ridiculous what they do to people, they don’t need to make you that cold," said Saltzman. "Old Arthur was screaming at me!"

"She won’t know who Arthur is," Mark said to his mother.

Saltzman hopes sharing her story will help others.

"That’s what I want people to do: don’t be ashamed of something that’s going to help you feel better," she said.

Her son Mark says this deputy made a mistake.

"I just thought it was absolutely ridiculous to put her through this like that: they could have given her a ticket," said Mark Saltzman.

"And just show us your card later. Reapply for your LARA card, show us this, and then drop the charges."

FOX 17 reached out to the Clare County Prosecutor and Sheriff about how this case was handled.

Then, court records show on August 2, a Clare County judge signed an order to dismiss Saltzman's case without prejudice.

Then, Clare County Sheriff John Wilson wrote this statement to FOX 17, but did not comment on whether his deputy should have arrested Saltzman:

"What the person was doing was illegal, had she renewed her medical marijuana card she would have been fine.  I agree with the action the prosecutors office and allowing the subject to renew her card, thus dismissing the case. The person was illegally in possession of marijuana."

Saltzman's renewed Michigan medical marijuana card is on its way to her, but she urges voters to legalize marijuana in November and end the stigma.

"I'm hoping that we all learn a lesson from this and that we make amends, and people will get out and vote for it," said Saltzman. "We’re the ones that have to stand up we are the people, and we just got to fight for our rights."