Sen. Sanders draws a crowd of thousands for El-Sayed in Detroit 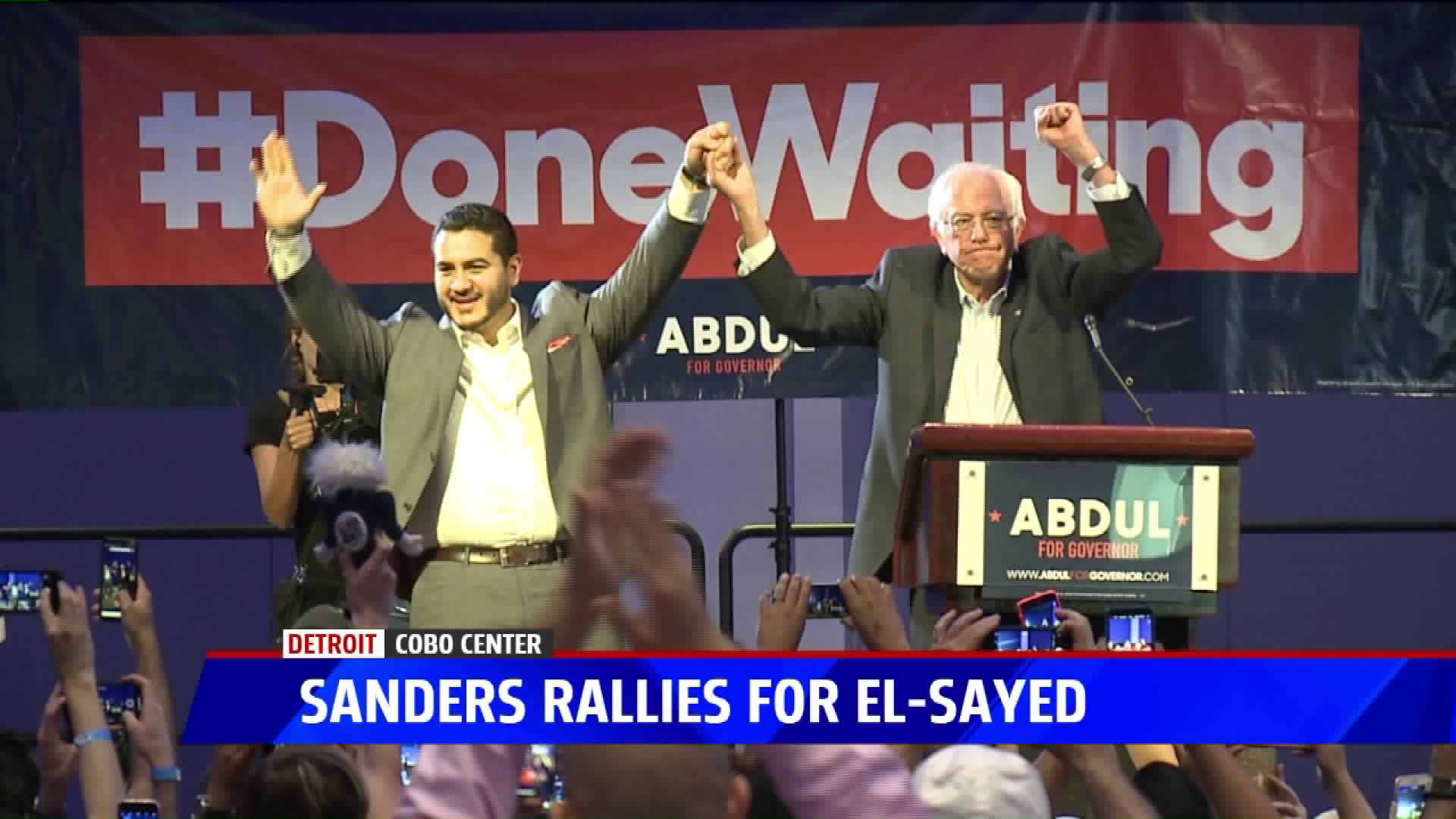 DETROIT, Mich.-- One of the biggest names in progressive politics stopped in Michigan on Sunday to rally support for Democratic gubernatorial candidate Abdul El-Sayed.

Two days before the August 7 primary election, over 2,000 people filled the Cobo Center in Detroit to see Senator Bernie Sanders (I-Vt.), who says he wants to see Michigan "make history" by electing El-Sayed as the first governor of Muslim faith in U.S. history.

“I am here today with Abdul because working families in Vermont and Michigan and all over this country are sick and tired of a rigged economy in which the very rich get much richer while the middle class continues to shrink," Sanders told the crowd.

Sanders said El-Sayed's campaign is about "all of us" rather than "just the one percent." However, it's a campaign that according to many polls has a lot of work to do in order to win on Tuesday. Though El-Sayed says he's not phased by the polls.

“My sisters and brothers, we’ve got a choice in 2018," El-Sayed told the crowd. "However much they want to tell us that the decision’s already been made. The pollsters will always get it right in Michigan, they already told us who to vote for. A bunch of people answering landlines in the middle of the day.”

Sanders knows campaigning in Michigan well having won the state in an upset against Hillary Clinton during the Democratic presidential primary in 2016.

“I understand there has been some discussion here in Michigan about the polling and the fact that Abdul is behind in some of the polls," Sanders said. "So, let me give you the personal perspective of somebody who experienced Michigan polls a few years ago and that is that on the day before the presidential primary here in Michigan, the polls had me 27 points behind."

In the crowd on Sunday was Jessica McCallie-Arquette, a West Michigan voter and member of the progressive group Michigan Our Revolution Electorate. She tells FOX 17 she's a long time supporter of Sanders and travelled from Newaygo County on Sunday to see him speak. She says implementing single-payer healthcare is her top priority this election.

“When we know that healthcare can be more than just affordable, it can actually be a possibility for every Michigander," McCallie-Arquette says. “I see a progressive wave. I see a resistance toward the establishment blue wave.”

Sanders stands behind El-Sayed's "Michicare" plan, which is a comparable state-level version of Sanders' "Medicare for All."

“Why are we allowing CEOs and big corporations to take home $13 million a year while 600,000 of our sisters and brothers still don’t have access to healthcare?" El-Sayed said during the rally. "When are we gonna stand up for Medicare for All in the state of Michigan?”

El-Sayed was once the underdog of the Democratic gubernatorial race but has recently gained national attention and high-profile endorsements. New York's Alexandria Ocasio-Cortez endorsed El-Sayed after winning her primary against longtime incumbent Joe Crowley. El-Sayed's campaign also announced via Instagram that it received the maximum individual contribution of $6,800 from actor Ben Affleck. Sanders gave El-Sayed his official endorsement on July 25.

Actress Shailene Woodley and actor Kendrick Sampson were also at the rally and helped sign up volunteers for canvassing shifts after the event.