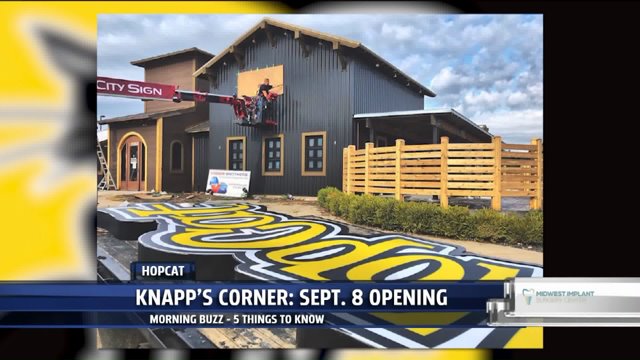 1. It's an election day here in Michigan! The polls are open until 8 p.m. for the primary.

The big races are the gubernatorial primaries, but voters are also choosing the candidates whose names will appear on the November ballot for several legislative seats.

Remember that in primaries, you have to stick to a single party in partisan races. You can't cross columns to select candidates from multiple parties.

Look up a sample ballot and confirm your polling location on the Michigan Secretary of State's website.

2. An NFL referee here in West Michigan is giving back to his community by raising money in a Super Bowl ticket raffle.

Carl Paganelli is from Grand Rapids. Back in 2016, his wife Cathy passed away. He donated two Super Bowl tickets to Faith Hospice for a special fundraiser as a way to give back to the organization that helped his family following Cathy's passing.

So here's how the contest works: buy a raffle ticket for $100, then on September 12 the winning ticket will be drawn. The average price of a Super Bowl ticket usually runs between $2,500 and $3,000.

Organizers only made 500 tickets available, and as of Monday, there were only 200 left. All the money raised will benefit the hospice facility's bereavement program.

3. Entertain the kids this week at the Kalamazoo County Fair, which kicks off today.

Enjoy free themed kids expo activities and entertainment all week. There will also be more than 400 farm animals, musical entertainment, food and games.

For more on prices and a list of events, head to kalcounty.com .

The fair runs through Saturday.

4. A great time to get to know the neighbors is at the National Night Out tonight.

People across Michigan and the rest of the country will take part in special events that are all about making our neighborhoods safer.

It's always held on the first Tuesday in August. Neighborhoods across West Michigan will host block parties, festivals, and cookouts.

Another goal for National Night Out is to improve the community's relationship with police.

Check with your local police department for events happening near you.

5. The opening date has finally been announced for HopCat Knapp's Corner. They'll be opening their doors on Saturday, September 8, and it'll be a big celebration.

All 80 taps will pour craft beer from Grand Rapids-area breweries, and they'll be giving out free orders of their famous crack fries, recently ranked among the "10 Best Fries in America" by the Food Network.

Also the first 200 guests in line when the doors open at 11 a.m. will receive a card good for one order of free crack fries each week for a full year.