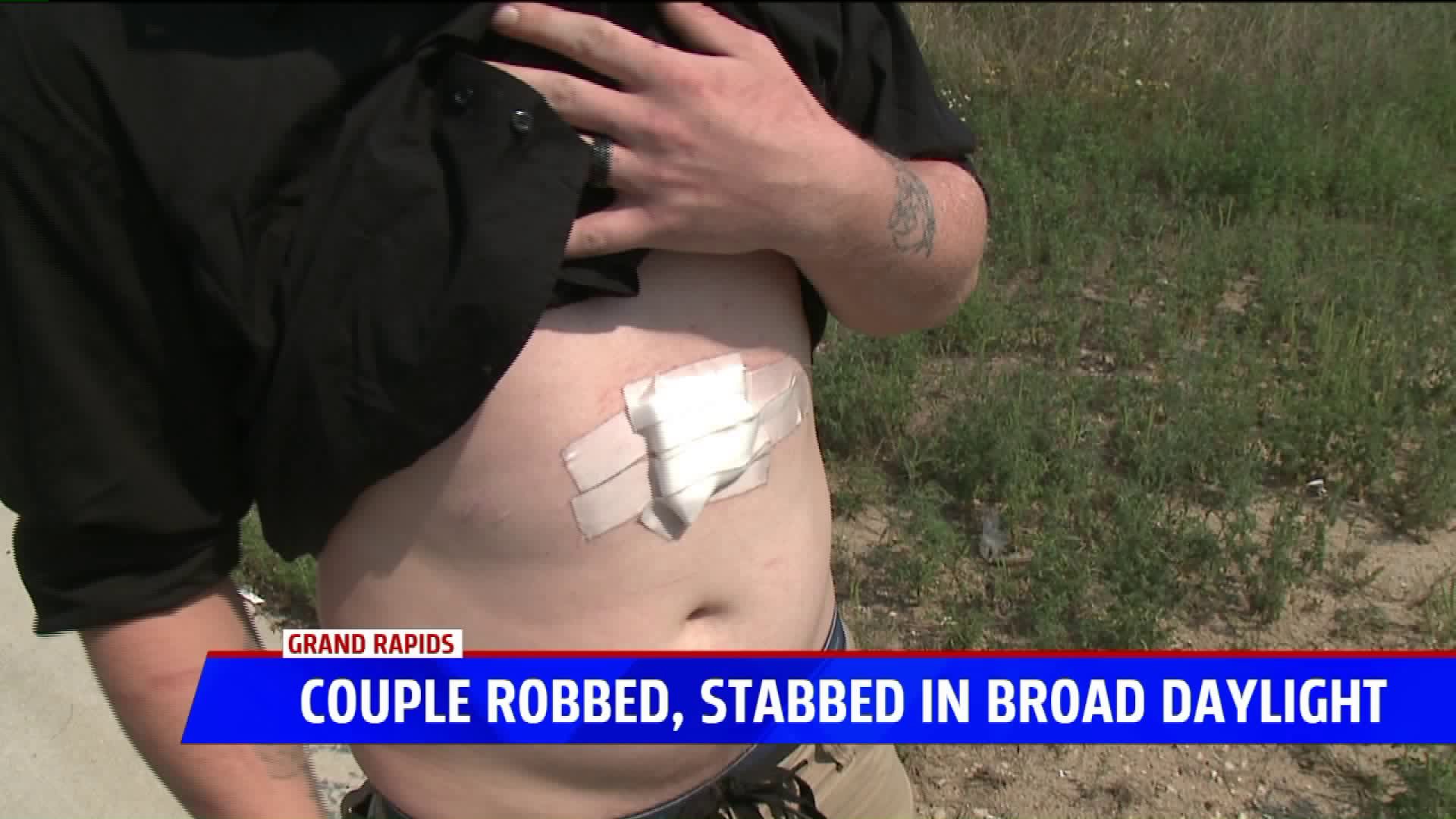 GRAND RAPIDS, Mich.-- A soon-to-be married couple is struggling to survive after a violent robbery nearly left one of them dead.

On the afternoon of July 30, Tylor Fender and his fiancée were walking in downtown Grand Rapids. It was supposed to be a happy day for them because they were about to make a down payment on a three-bedroom home. They were on their way to make the deposit of about $800 in cash when they decided to stop for lunch. On their way, they were attacked.

“I see this guy out of the corner of my eye walking up," Fender tells FOX 17. "He’s wearing this big, black, like thick, puffy winter coat. Before I could even get the words out of my mouth, he stuck me.”

Fender had been stabbed in the chest. He fell to the ground and was stabbed again in his left arm.

“They said it was within an inch of hitting my heart, missed my lungs barely, said if it would have went any deeper by a millimeter, it would have hit my colon," Fender says.

Fender says the attack came out of nowhere.

“At first I thought he was someone who knew me because he did it like, with a smile on his face," Fender says. "It was sort of like a playful kind of thing.”

It wasn't someone he knew, it was allegedly 19-year-old Kamari Beeks. Fender says Beeks went to stab his fiancée but the blade of the knife broke off when Beeks allegedly stabbed his arm.

“I only realized it when the knife broke off and tinged off the ground," Fender says. "Like, okay this is real.”

His wife was spared from being stabbed but there was another thing still at stake.

Fender and his fiancée work jobs at Arby's and Burger King, so it took them months to save up the money for their down payment. Fender says the new home was supposed to be their ticket out of homelessness and that they had been staying with friends for the past year.

“He took away the potential for us to be established, you know?" Fender says. "To have the little American dream, like white picket fence house. To have a yard that my son can play in and he took that away and made it that much harder for us to you know, to come back up and build up and be able to do it again.”

He says the home was also meant to give their 4-year-old son with special needs a sense of stability.

After he was stabbed, Tylor says he wanted to do whatever it took to keep their cash from being stolen.

“I didn’t know what was going on," Fender says. "There was so much confusion but really it was like, my thought process went like, ‘Okay, I just got stabbed. I have to go get this money back from him and possibly die.’”

Tylor says he ran after Beeks but thought he saw him reach for a gun, so he ducked. Tylor says a woman in a nearby parking garage called police when she saw Beeks hiding underneath a car. Beeks was arrested by Grand Rapids Police and now faces felony charges.

Despite nearly losing everything, Tylor says he doesn't feel hate toward the man who nearly killed him.

“I’m not mad at the guy," Fender says. "You know, I don’t hate him. It’s alright. I’m alive. Like I said, I feel bad for him, you know? If you’re hurting that bad that you have to take someone’s life for a 50/50 chance that they may or may not have money in the bag, then I feel for you, man.”

The attack took Tylor away from his job at Burger King, which means he missed a paycheck. In order to keep a roof over his family, Tylor says he asked his friend to allow his fiancée and their son to stay on their couch even though there isn't enough room for Tylor.

“I actually don’t have a place. I’m homeless," Tylor says. “I slept in a tent by the train tracks.”

Since police found the $800 in cash in Beeks' pocket, it will be up to a judge to determine who the money belongs to.

Beeks will have a probable cause hearing in court on Tuesday.