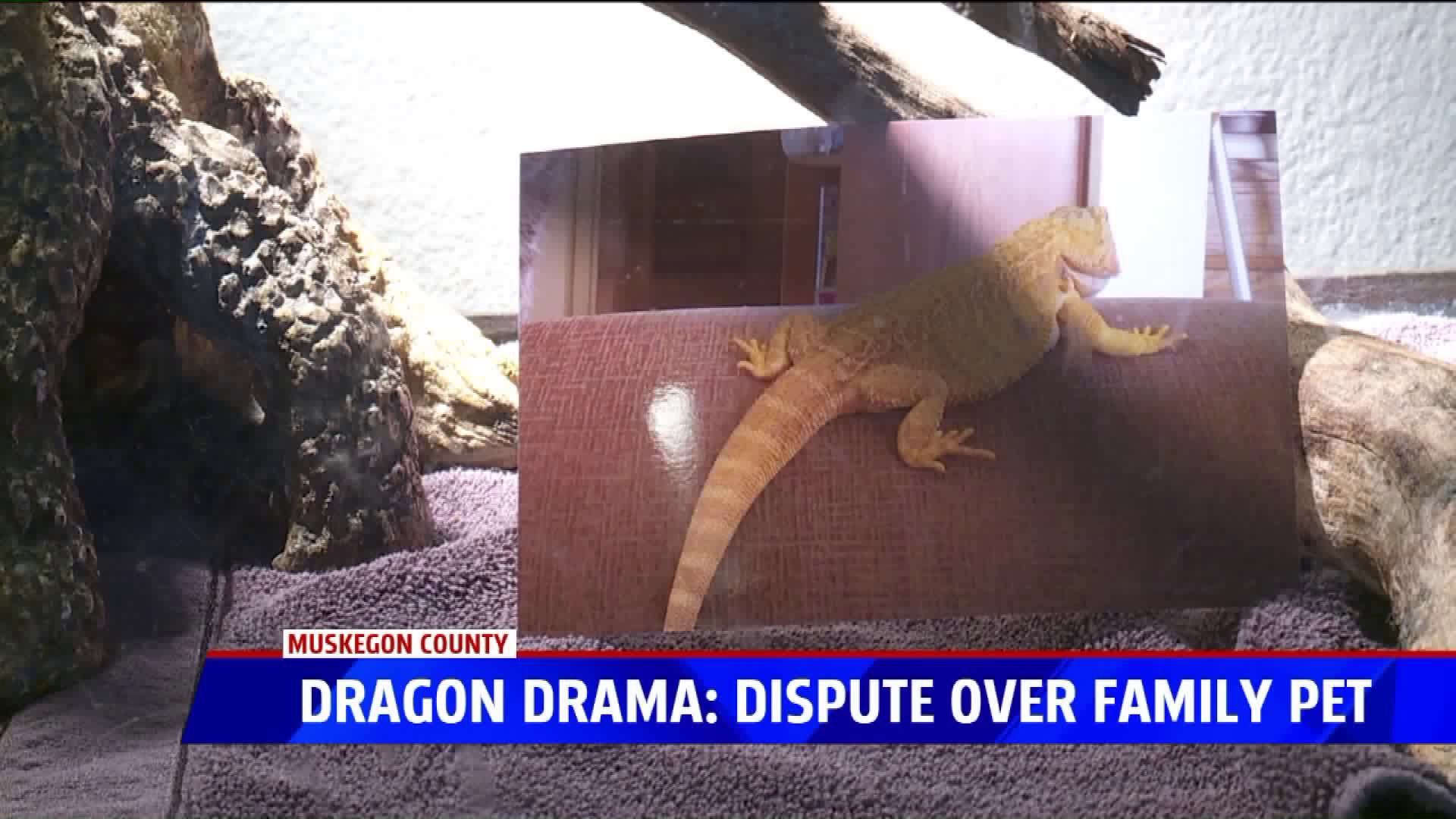 TWIN LAKE, Mich. -- A bizarre story is unfolding in Muskegon County: a woman says her pet bearded dragon escaped from her home and that the people who found it are refusing to help get it back.

Sarah Richards says the lizard escaped from her home almost two weeks ago and ended up with another woman who she claims took care of it for a few days before giving it away to another guy.  That woman tells FOX 17 she won't try to get the reptile back unless Sarah does a few things first.

Jill the bearded dragon has been a part of Richards' family for four years after they got it on Craigslist.

“She gets free roam of my house for a few hours... We’ll sit here and watch TV together, share fruits and vegetables, she’ll eat right out of your hand and it’s a really good lizard," Richards said.

“This front door here, unless you lift up on the handle it doesn’t latch all of the way. So at one point my 8-year-old went outside, closed the door behind him and it bounced back open," Richards said.

She noticed Jill was gone the next day, and after looking around for the dragon she took to social media.

“I posted on Facebook about how sad I was... and one of my Facebook friends sent me a picture of a post online saying they found a bearded dragon," she said.

That's when she contacted Jeff, who lives just a few blocks away and who posted about finding a bearded dragon in his garden.

“He agreed that it was mine, told me that he would give me his phone number and I could call him about it the next day," she said.

In the meantime, Jeff had already given the reptile to his friend Cindy Parrish to care for as they searched for the owner. When Richards reached out to her, she says Parrish didn't believe the dragon was hers.

"She told me she wanted more pictures," Richards said. "So I sent her several... but she told me that the bearded dragon that she has was a different color than mine therefore it wasn't mine and she was sure of it."

Richards says bearded dragons change colors and her dragon is missing a nail on the same toe of the reptile that was in Cindy's possession.

"I asked her if she really thought there were multiple bearded dragons running around this area, she just wouldn't respond," Richards said.

Richards tells FOX 17 she contacted police, who told her it's a civil matter so she would have to go to court. She filled out three separate forms before her 1-year-old daughter had a meltdown and she went home.

"On the way home I was crying," Richards said. "I just, I'm getting so frustrated I can't get her back."

FOX 17 spoke with Parrish by phone on Monday night. She says Richards was rude and multiple people attacked her on social media about the dragon so she gave it to another man.

"She and her incompetence let that thing out the door," Parrish said. "It got lost, it got taken by someone else. Oh well. I'm sorry, it's not my fault that she let the thing get away and I didn't do anything wrong at all."

Parrish has a list of demands for Richards before she even considers contacting the man who now has Jill.

“I’m not going to try and do anything for this woman unless she makes a huge, huge confession to me first because she doesn’t have any idea what I went through to try and get this thing to the correct owner," Parrish says. "She should just be happy that it has a home period and it’s not dead like she thought it was."

Parrish wants more pictures of the dragon, for Richards to take down all her social media posts about the incident as well as an apology.

"“I want her to go on every website that she’s been on badmouthing me and rescind everything," Parrish said. “And a written apology for god sake. I saved her creature from infinite demise you know? I don’t even know for sure if it’s hers. I’m still skeptical, I think she’s just looking for attention."

Richards says the situation is ridiculous but she's willing to do whatever it takes to bring Jill home.

"I can't fathom why anyone would want to keep her form her family," Richards said. "All I want is my dragon back. That's all."

FOX 17 also spoke with Jeff, who said he feels bad about the situation but is no longer involved. He said he gave the dragon to Cindy because he didn't have the right equipment to care for the bearded dragon.