‘Get your hopes up:’ Veteran brothers getting back on their feet with VetGR program 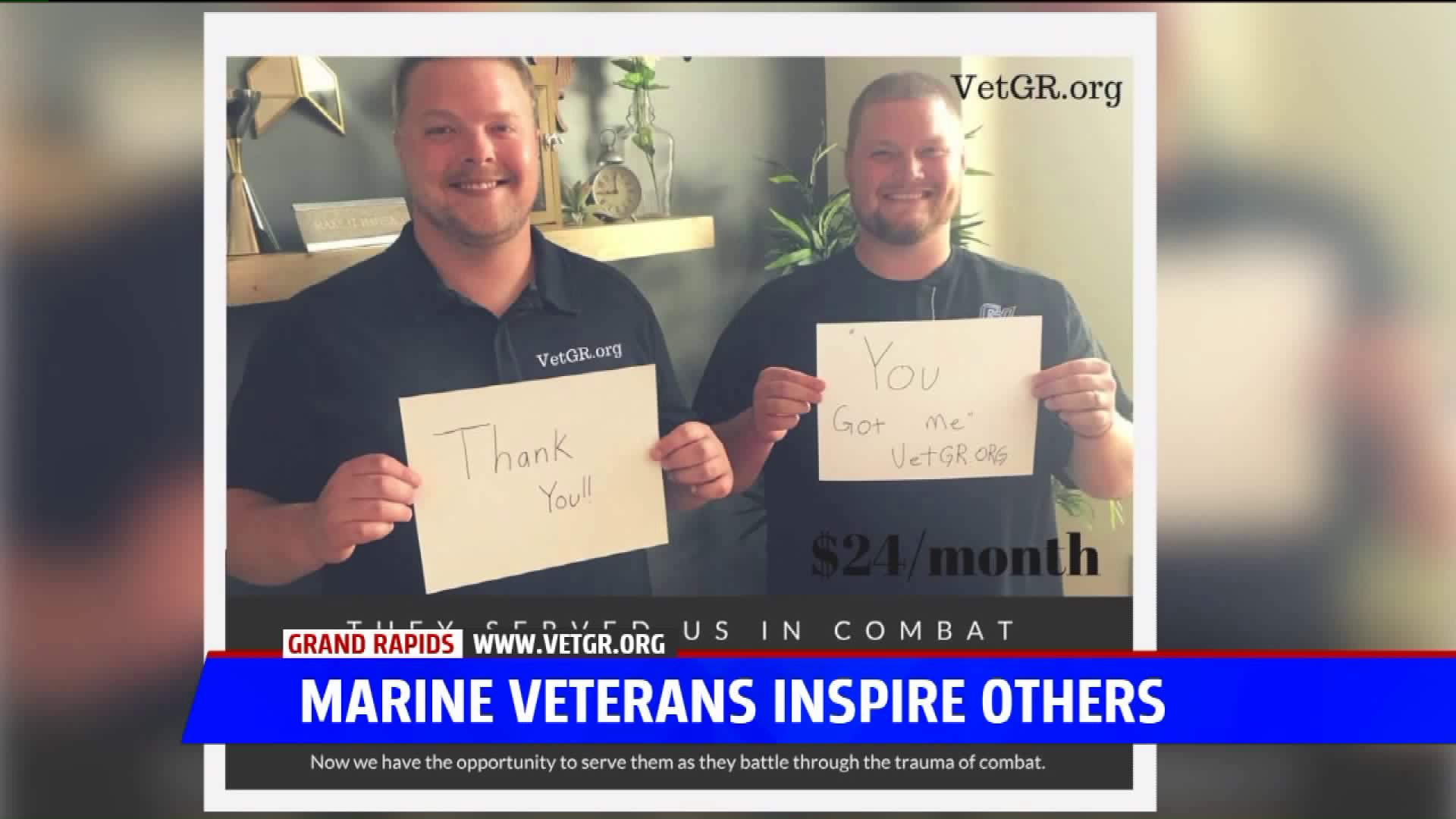 GRAND RAPIDS, Mich. -- A West Michigan organization is helping veterans get back on their feet with help from others who have served. It's already showing progress for two brothers from Hudsonville who are going through the program together.

Marine Corps veterans Ryan and Derek Wieringa have seen the worst of the worst. They thought things would get better when they came home, but as is the case for many veterans, they didn’t.

But now they say for the first time they have high hopes there’s improvement on the way.

Like it was for many veterans, Sept. 11, 2001 was a call to patriotism for Derek and Ryan.

"I wanted to do something big with my life and the Marine Corps recruiter happened to look good," said Derek. "I liked the uniform and I liked what the Marines stood for. Before you knew it, we were off. Me, my cousin and my brother.”

The siblings, along with their cousin Jeff Rands, joined the Marine Corps in 2009 and 2010 and eventually made their way to Afghanistan.  Jeff was deployed to Iraq.

The three Marines were finally back together, but not for long.

"My cousin was diagnosed with brain cancer while he was still in the Marines," said Ryan. "The whole time we were in, we were separated and then we came back and we’re finally together again and then he gets taken away.”

Jeff passed away in September 2013, something that was a turning point for Ryan and Derek.

"That kind of spiraled everything out of control right there," said Ryan. "It was kind of the last step off the edge I guess. I didn’t know I was that close to the edge to be completely honest and all the sudden everything just started spiraling."

“Drugs and alcohol and isolation and hiding," said Derek.

It sent both Ryan and Derek into a dark place.

"I didn’t care," said Derek. "I was hoping tomorrow didn’t come. I didn't care if I died. That happened in Afghanistan. You check out. You're good."

Both Ryan and Derek say they’re here today because of each other, but they wanted to do more than just exist. That’s when they met Jesse Johnson-Brower.

"When I got out of the Army, the transition was really rocky," said Jesse. "That’s really why this is here today."

Jesse is an Army veteran who once struggled himself.

"I’m no better, I'm just a little bit further down the road," said Jesse. "When I met them a month ago, I put that as like year nine for me. The first eight, I was a strung-out vet. I ate at Guiding Light Mission. I’ve been there before and thankfully they weren’t at that phase.”

This year, Jesse created VetGR, a nonprofit organization aimed at helping struggling veterans get back on their feet. Jesse has more than 20 vets going through the program now, including Ryan and Derek, who are just a few weeks in.

"It works and it makes sense and I have made massive strides in 3½ weeks," said Ryan. "If you were talking to me a month ago, you’d be talking to a completely different person.”

"The first thing Jesse told us was to get your hopes up, and we’re just like, this dude’s crazy, there’s no way," said Derek.

Jesse has the brothers on a strict diet and exercise plan, biweekly counseling and they’re working full-time in the office.

"When you add significance and purpose into someone’s life, it can change everything if they’re willing to look," said Jesse.

They’re also documenting their journey on Facebook, hoping their story inspires other struggling veterans to take the first step to getting help.

"We want to give hope to people," said Ryan. "Get your hopes up, like Jesse said, and that’s such a good feeling to hear that from somebody who believes in you.”

"Veterans are killing themselves every day and if I have to be embarrassed on camera, so be it. That’s it," said Derek.

Both Ryan and Derek say that for the first time in their lives they have something they care about and are passionate about.

They say they know a lot of veterans are struggling and may be isolating themselves and unplugging from technology, so they may not see this story.

If you know someone who may need help, visit the VetGR website.