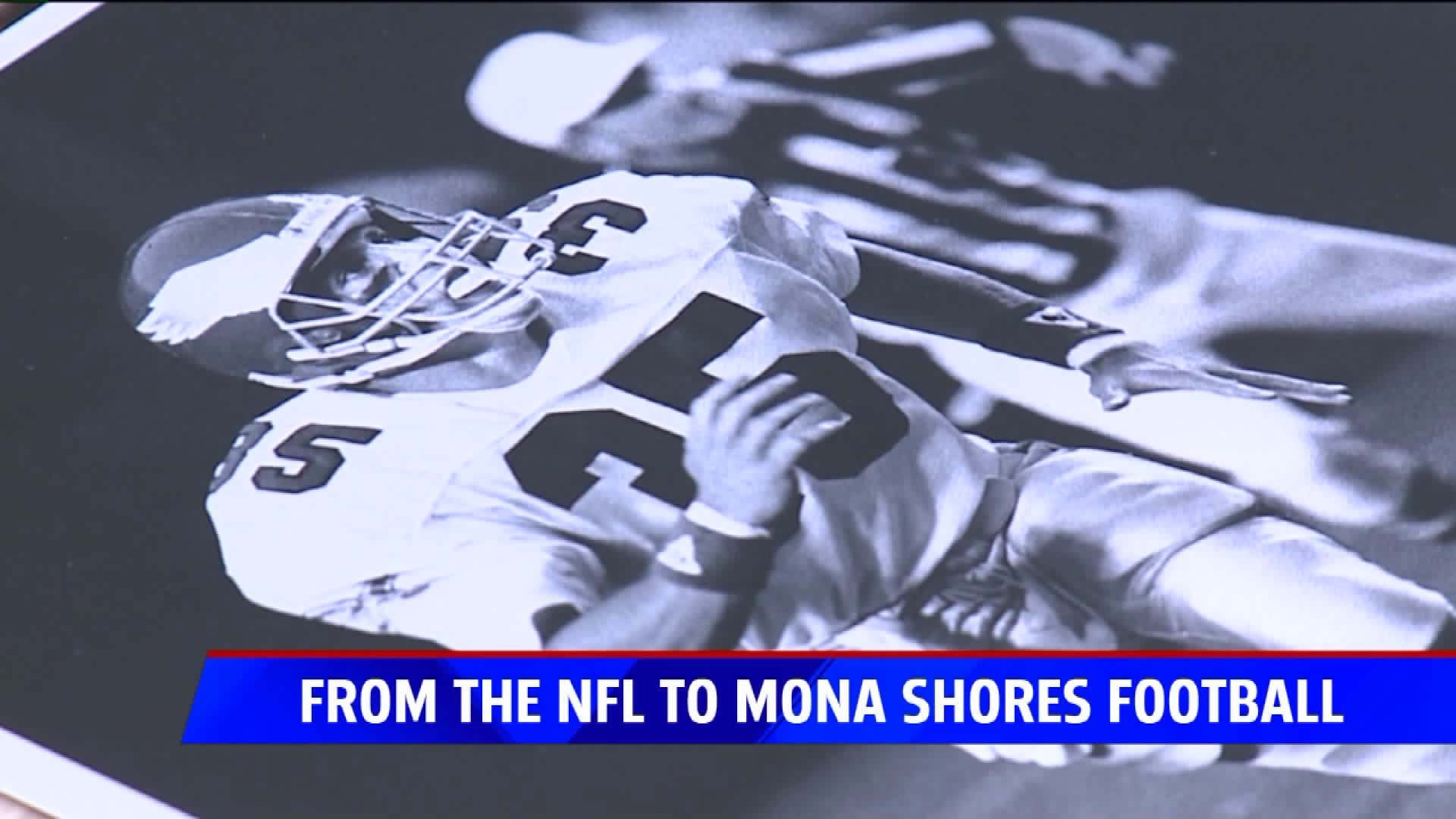 NORTON SHORES, Mich.-- A familiar face is returning to the sidelines this year at Mona Shores High School in Muskegon County. The hall of famer spent two years in the NFL and now he’s a firefighter in his hometown also coaching football.

Anyone who is from the area might know the name Mark Konecny. He’s the first Mona Shores graduate to play professional football and now he’s giving back to his community as a Norton Shores firefighter. He is also coaching at his alma mater where his son is a freshman this year and also playing football.

There’s a new addition to the Mona Shores football coaching staff this year who’s played on these fields before.

"This is so cool to be doing this with Mona Shores and the blue and white," said Mark Konecny. "It’s the same fields and the same practice fields."

Mark Konecny was a hall of famer at Mona Shores High School in Norton Shores as a former starting quarterback graduating in 1981.

Konecny’s dreams of playing division I football were shattered when he broke his collarbone halfway through his senior year. He went on to play division III football at Alma College where he switched to a running back spot.

After receiving offers from the Detroit Lions and Cleveland Browns, Konecny decided to join the Canadian Football League. After two years, his dreams of playing in the NFL would come true.

"I signed the contract and moved down to Miami and started going through their winter workouts to go through the regular season," said Konecny.

Konecny played with the Miami Dolphins on their practice squad and was then traded to the New York Jets. After a few games, he was traded to Philadelphia.

"I was now a full time Eagle for the NFL.”

That’s where Konecny would make his professional debut in 1988.

"Running out on that field for the first game against Tampa Bay and we were playing in Tampa Bay and the music was playing and you looked around and you saw 80,000 people in the stands and it was like, okay I’m here. Now don’t mess up," said Konecny.

Mark finished the season with the Eagles as the lead kickoff and punt returner and would go back to the Jets the next but a torn ACL and meniscus would mean the end of his career.

Life led Mark to Lansing Community College where he trained to become a firefighter.

"It was probably the best decision next to playing football because it’s the closest thing in my mind to playing sports," said Konecny. "It’s a job that you have to be in shape for, there’s teamwork involved with it, there’s training involved with it and then when we actually run the calls, or run the fire, that’s game day to us.”

After 24 years working in Littleton, Colorado, Mark decided it was time for a change. He applied for a job with the Norton Shores Fire Department where he’s worked for nine months.

“He is just a very well-rounded guy," said Fire Chief Bob Gagnon. "Very polite, we look for firefighters that are going to serve our department well, serve our community well and he absolutely fit that mold for me.”

"It’s nice having him as a coach until he starts yelling at you and then, oh that’s my dad and he’s yelling at me so it is that part it effects, but other than that he’s been a pretty good coach," said Konecny Jr.

Mark’s son will be a freshman at Mona Shores also following in his dad’s footsteps as quarterback.

In just a few days, Head Coach Matt Koziak says Mark has filled the role of assistant coach quite well.

"Right away you could tell he had a connection with the guys and it has just kind of gotten stronger and stronger as its gone along," said Koziak.

It’s been a long road for Mark, but he says he’s thrilled to be back in his hometown serving his community and giving his son the same opportunities he had.

"He’s making his own name for himself which is kind of cool because I’ve really had to force myself to step back, open the wings and let him fly and do the things that he needs to do to find his own way," said Konecny.