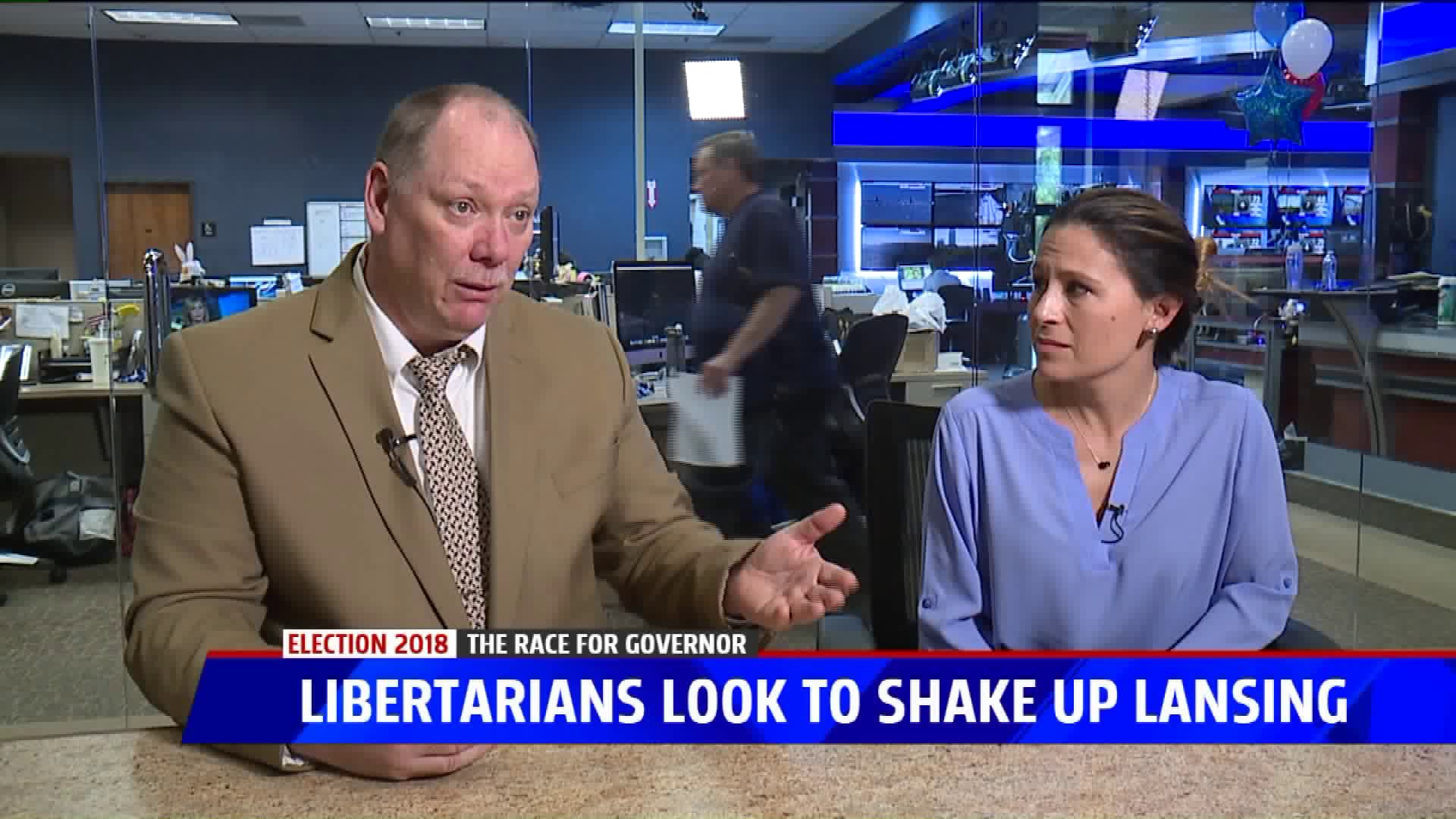 GRAND RAPIDS, Mich.-- Running on the principles of small government and personal liberty, Bill Gelineau (L) says it's time Michigan voters look past major parties and elect him as governor.

Gelineau grew up in a family of union Democrats. His running mate, Angelique Chasier Thomas was raised on Republican values. They say together, they bring the best of both worlds.

“We want to work day to day to show that we’re deserving of the opportunity. I’m not running to be king, I’m running to be governor," Gelineau tells FOX 17.

The August primary election was the first time gubernatorial Libertarian candidates were on the ballot for a Michigan primary election. Gelineau defeated retired teacher John Tatar by just over 15 percent of the party's votes. The two candidates got 6,975 votes combined.

Despite the low primary turnout, Gelineau and Thomas say they are confident they'll see higher numbers in the general election.

“Libertarians really don’t believe in the primary process," Gelineau says. "They don’t think that the tax payers should put up the money for that, so I know hardcore Libertarians that did not vote for either one of us.”

Thomas says politicians in the Democratic and Republican parties are starting to be held more accountable for their actions thanks to increased transparency brought on by advancements in technology, making room for Libertarian candidates to shake things up.

“This is the best system," Thomas says. "No system is perfect. There’s certainly flaws with Libertarianism but they’re minimal compared to the other choices out there.”

A Libertarian system, according to Gelineau and Thomas, would lower the spending limit of the state by 10 percent under their "Drop the Cap" plan.

“The idea is that, especially about Drop the Cap, is it puts in place a paradigm that says we want taxes to be low as is reasonably possible and still meet the responsibilities of government and that we shouldn’t be giving out favors and by doing so, we create a more fair playing field," Gelineau says.

Both Gelineau and Thomas are small businesses owners, which they say gives them a close look at the tax system they want to reform.

Thomas recalls a recent instance where she was helping one of her new employees understand why her paycheck was less than she expected.

“And I showed her the line items and that about $150 of that, why are we taking things from people to fund special interests?” Thomas says.

Gelineau and Thomas also support the legalization of recreational marijuana and say if elected, they would appoint a clemency board.

“As governor, Angelique and I will convene a board and determine, who are those people who are really low-level possession situations where we can get them out of the system at $45,000 a year and get them back to being a productive citizen?" Gelineau says.

Ultimately, Gelineau and Thomas say they want to change the political landscape of Lansing and end the era of a two-party system.

“At the end of the day, the most important thing that we address is how does the Libertarian party have the opportunity to really be heard?” Gelineau says.

Thomas says a bipolar political system is taking a toll on taxpayers.

“When you have two polarizing parties and when one is in power, you’ve got a lot of spending in one area and they totally neglect other areas," Thomas says. "Then you have a switch of power. This change, it costs. It costs the taxpayers in order to flip that and there’s no reason in the middle.”

The general election will be held on November 6.