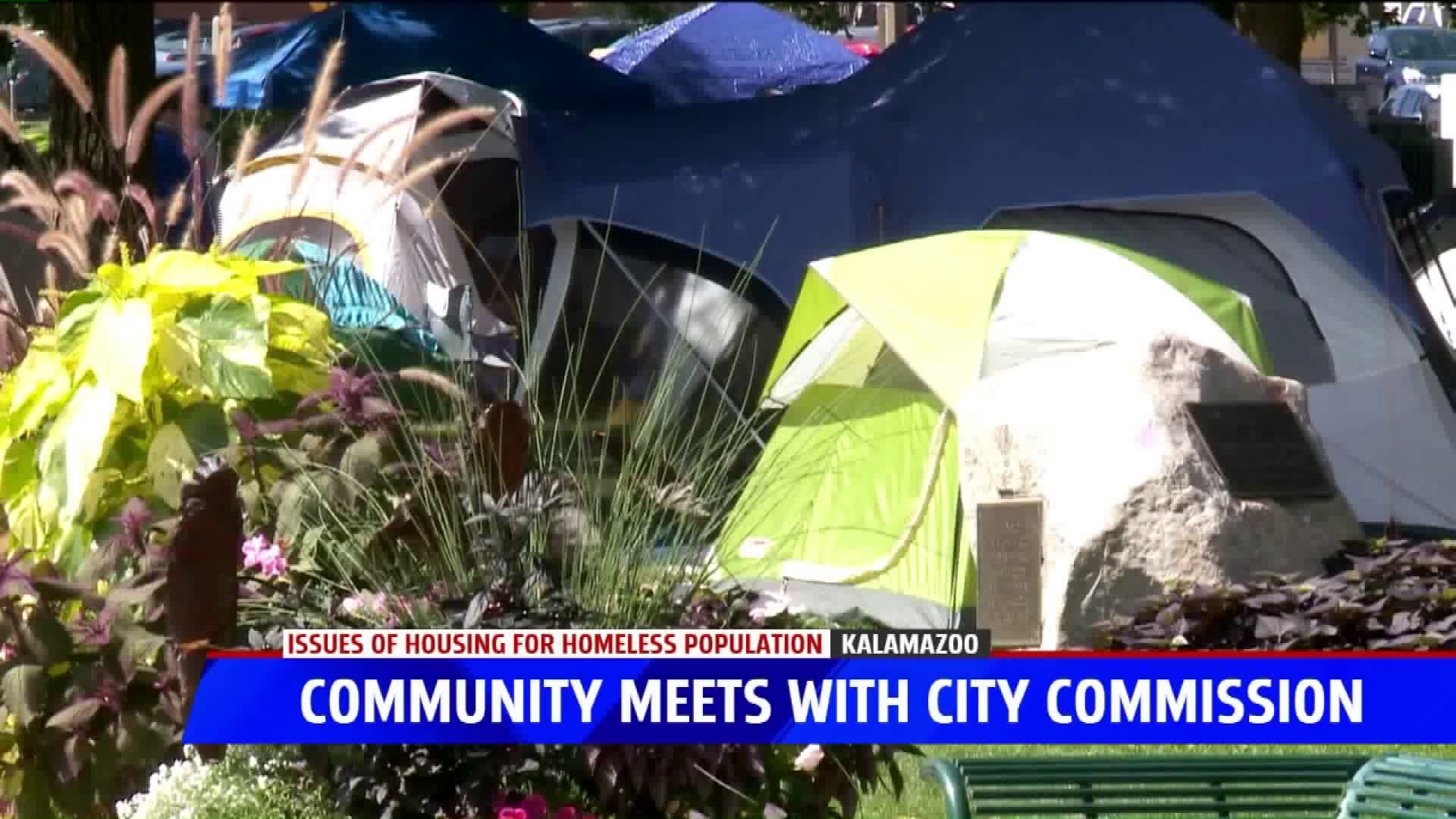 KALAMAZOO, Mich. — Protestors continued to camp in Bronson Park for the fourth consecutive week. Several times representatives from the encampment met with the city officials at City Hall to discuss possible solutions. No agreement was reached. However Friday morning, after a two and half hour meeting, a plan was put on paper.

“I think it’s a good step,” said City Commissioner Shannon Sykes-Nehring who facilitated the meeting. “I know we’ve had a couple of meetings before but this to me feels like the first good step.”

Sykes-Nehring was among the city officials, community organizers and protestors — many of whom are homeless — to attend the meeting at Ministry with Community on Edwards Street. Everyone agreed early on that affordable housing was the best longterm solution. However, the discussion over a short-term solution lasted over an hour. Officials continuing to offer local shelters as a possible remedy. The protestors rebutted, saying some are unsafe.

“We’ve divided ourselves between homeless and not homeless,” said protestor Faith Vlietstra with tears in her eyes. “You have money and you don’t. And it shouldn’t be like that.”

She said everyone should consider the other as family. Chris Sargent, CEO of the United Way, suggested forming work groups to understand and meet the encampment’s basic needs.

“We’ve now broken down into smaller work groups instead of one big group to focus on the individual areas that affect homeless people on a daily basis,” said protestor Michael Rizor.

Four groups were created:  immediate needs, mental/emotional support, physical needs, housing. Each group will comprise of individuals from both groups and will create a plan regarding those issues.

Homeless men and women began protesting in late August when they city initially proposed a ban on camping at Bronson Park, located in downtown Kalamazoo, overnight. Angry, they pitched tents on the steps of City Hall. Days later, after meeting with Ritsema and others, they agreed to move to the Cedar Street location. However days after that they returned to Bronson Park after deeming the other location was inhumane, protestors said.

“These folks have community meetings twice a day,” said Sykes-Nehring who joined the encampment last week. “They’ve elected a leadership team. They’ve organized the food tent and the donation tent. This is a group of organizers who simply don’t have a house to go home to.”

An additional formal meeting has not been scheduled yet. However, both sides said they walked away feeling that progress was made.

“We’re committed to this issue,” said Ritsema. “It’s a huge nationwide issue. It’s not just Kalamazoo and we got to address this so anyone who’s involuntarily homeless has housing options.”