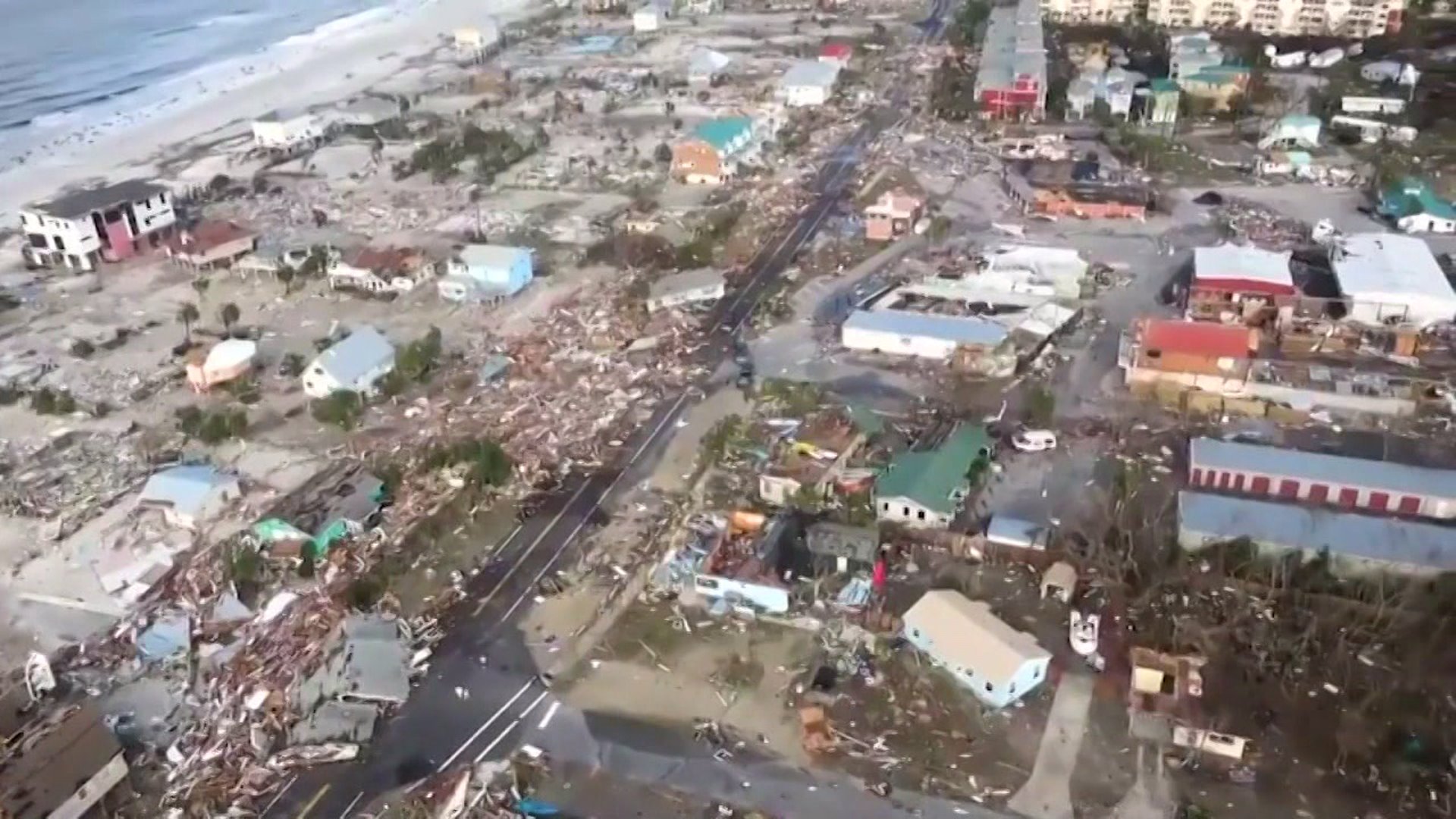 PANAMA CITY, Fla. (AP) — Linda Marquardt rode out Hurricane Michael with her husband at their home in Mexico Beach.

When their house filled with surging ocean water, they fled upstairs. Now their home is full of mud and everywhere they look there's utter devastation in their Florida Panhandle community: fishing boats tossed like toys, roofs lifted off of buildings and pine trees snapped like matchsticks in 155 mph winds.

Row after row of beachfront homes were so obliterated by Michael's surging seas and howling winds that only slabs of concrete in the sand remain, a testament that this was ground zero when the epic Category 4 hurricane slammed ashore at midweek.

The destruction in this and other communities dotting the white-sand beaches is being called catastrophic — and it will need billions of dollars to rebuild.

"All of my furniture was floating," said Marquardt, 67. "'A river just started coming down the road. It was awful, and now there's just nothing left."

At least six deaths were blamed on Michael, the most powerful hurricane to hit the continental U.S. in over 50 years, and by early Friday it wasn't over yet: a tropical storm long after Wednesday's landfall, Michael stubbornly kept up its punch while barreling up the Southeast, dumping heavy rains and spreading flash flooding misery as far away as Virginia.

High winds, downed trees, streets inundated by rising waters and multiple rescues of motorists from waterlogged cars played out in spots around Virginia and neighboring North Carolina. And while forecasters said Michael was gradually losing its tropical traits, it was a new chapter would begin as an extratropical storm predicted to intensify with gale force winds once it starts cross out into the Atlantic.

In North Carolina's mountains, motorists had to be rescued Thursday from cars trapped by high water. High winds toppled trees and power lines, leaving hundreds of thousands without power. Flash flooding also was reported in the big North Carolina cities of Charlotte and Raleigh. Similar scenes played out in parts of Virginia as the storm raced seaward.

All told, more than 900,000 homes and businesses in Florida, Alabama, Georgia and the Carolinas were without power.

Meanwhile, thousands of National Guard troops, law enforcement officers and rescue teams still had much to do in the hardest hit area: Florida's Panhandle. Families living along the Panhandle are now faced with a struggle to survive in a perilous landscape of shattered homes and shopping centers, the storm debris spread far and wide.

In one community, Panama City, most homes were still standing, but no property was left undamaged. Downed power lines and twisted street signs lay all around. Aluminum siding was shredded and homes were split by fallen trees. Hundreds of cars had broken windows. The hurricane damaged hospitals and nursing homes in Panama City, and officials worked to evacuate hundreds of patients.

"So many lives have been changed forever. So many families have lost everything," said Florida Gov. Rick Scott, calling it "unimaginable destruction."

And Michael also was deadly, both in Florida and beyond.

A man outside Tallahassee, Florida, was killed by a falling tree was the first of "4 storm-related fatalities" announced by the Gadsden County Sheriff's office. An 11-year-old girl in Georgia died when Michael's winds picked up a carport and dropped it through the roof of her grandparents' home. A driver in North Carolina was killed when a tree fell on his car.

Some fear the toll can only rise as rescue teams get around storm debris blocking roads and reach isolated areas.

More than 375,000 people up and down the Gulf Coast were ordered or urged to clear out as Michael closed in. But emergency authorities lamented that many ignored the warnings.
The Coast Guard said it rescued at least 27 people before and after the hurricane's landfall, mostly from coastal homes. Nine people had to be rescued by helicopter from a bathroom of a home in hard-hit Panama City after their roof collapsed, Petty Officer 3rd Class Ronald Hodges said.

In hard-hit Mexico Beach alone, state officials say, 285 people in Mexico Beach defied a mandatory evacuation order ahead of Michael. The task ahead: finding and hopefully safely accounting for all those who stayed behind.

National Guard troops made their way into the ground-zero town and found 20 survivors initially Wednesday night, and more rescue crews are arriving. But the fate of many residents was unknown.

Mishelle McPherson and her ex-husband searched for the elderly mother of a friend. The woman lived in a small cinderblock house about 150 yards (meters) from the Gulf and thought she would be OK. The home was found smashed, with no sign of the woman.

"Do you think her body would be here? Do you think it would have floated away?" McPherson asked.