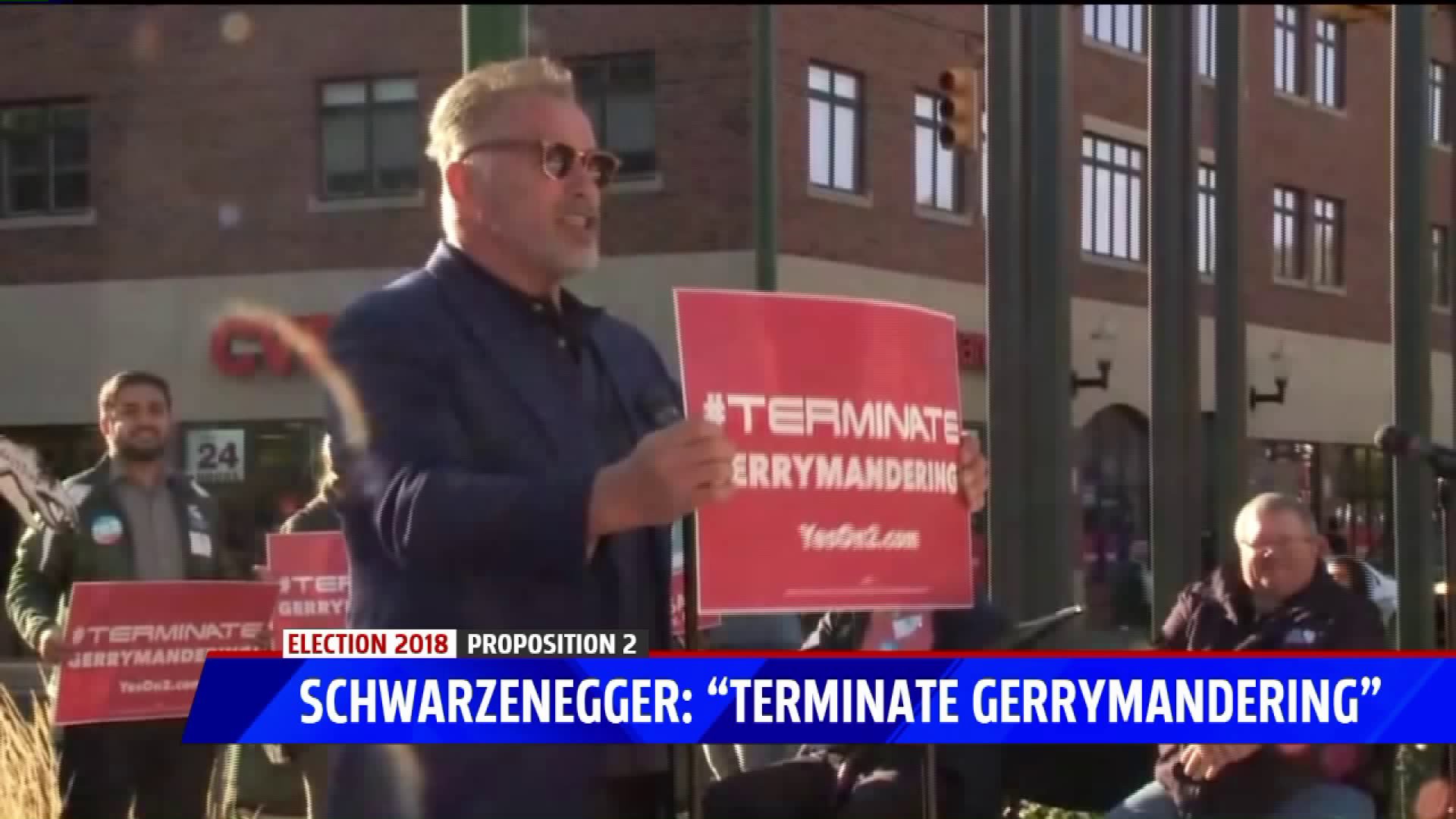 EAST LANSING, Mich.-- Former California Governor Arnold Schwarzenegger put the filming of Terminator 6 on hold to travel to East Lansing to attend a rally for the anti-gerrymandering Proposal 2.

The Hollywood star didn't shy away from making reference to his famous action series.

“Let’s go once and for all and terminate gerrymandering," Schwarzenegger told the crowd at Ann Street Plaza.

Proposition 2 was put on the ballot through the efforts of Voters Not Politicians.

Proposition 2 would amend the Michigan Constitution to establish a commission of citizens to create district boundaries for the Michigan Senate and House and U.S. congressional districts every 10 years. The commission would be made up of 13 registered voters randomly selected by the secretary of state. According to the proposition, four members must be Republicans, four must be Democrats, and the remaining five cannot be affiliated with a major party. Partisan officeholders and candidates, as well as their employees, families and lobbyists would be prohibited from serving on the commission.

“Politics has to become clean," Schwarzenegger tells FOX 17. "So I think that the Republicans, if they really want to drain the swamp, that’s the way to do it.”

A Republican himself, Schwarzenegger says gerrymandering is an issue that hurts all parties and voters.

“You know, here in Michigan you have it in favor of Republicans, so the Democrats are fighting back, and in other states you have Republicans fighting back," says Schwarzenegger. "So to me, what is important is let’s get rid of gerrymandering. It’s a fixed system.”

Voters Not Politicians was started by Katie Fahey, 29, who began her efforts with a Facebook post expressing her frustration with what she believes are gerrymandered districts in Michigan.

The League of Women Voters already filed a federal lawsuit against the state of Michigan over the issue.

“When you go to the ballot and you feel like your vote doesn’t matter, gerrymandering is one of the reasons why it doesn’t count as much as it should," Fahey tells FOX 17.

Schwarzenegger says he's proud of what Fahey has accomplished at such a young age.

“Here is a woman that didn’t just sit in front of the TV and start screaming about, you know, how terrible things are and the politics and the way things are going in this state, but she got up and did something about it," says Schwarzenegger.

In 2008 and 2010, voters in Schwarzenegger's home state of California voted in favor of a similar proposal that set up an independent commission to redraw districts. Schwarzenegger went so far to say that working to end gerrymandering is tougher than anything he's done on the big screen.

After the rally in East Lansing, Schwarzenegger flew to an appearance in Colorado, where voters will be voting on a similar anti-gerrymandering proposal.

Actress Jennifer Lawrence has also been vocal about her support for anti-gerrymandering proposals that will appear on ballots during the midterm elections.