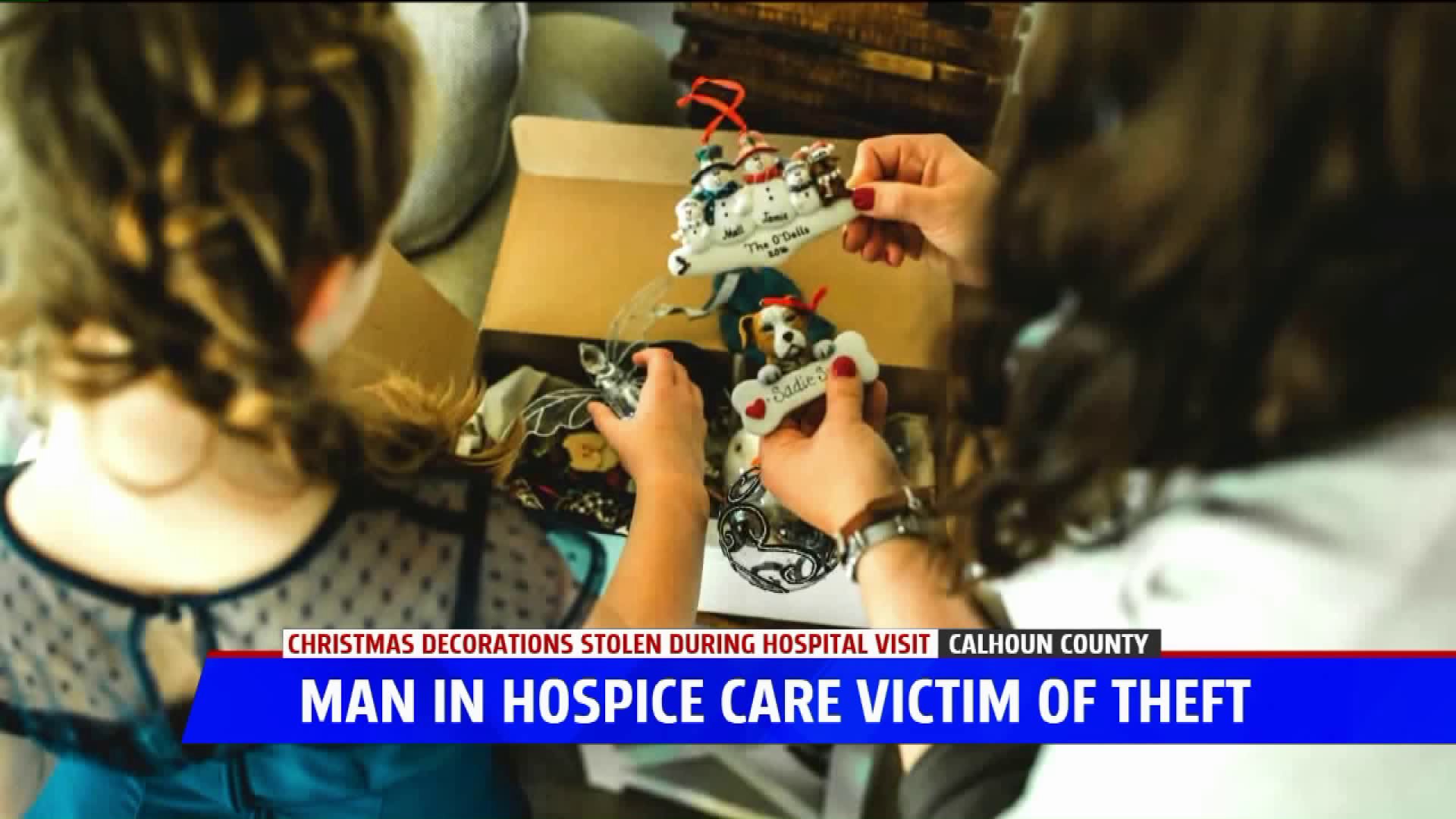 EAST LEROY, Mich. — To Matt O’Dell, family is “everything” he said. He loves spending time with his two kids and his wife Jamie, whom he celebrated 10 years of marriage with back in September. Every year, around this time, they get into the holiday spirit by decorating their Christmas tree with ornaments they have collected throughout the years. However when Matt went to retrieve them from their storage garage in Albion on Monday, they weren’t there.

They were devastated, Jamie said. Their mementos had been stolen, including handmade ornaments their kids made and an ornament they bought during their first year of marriage. Also, a dog ornament they bought while they were stationed in North Carolina was stolen, along with a snowblower and ice shanty.

“My daughter asked, she was like ‘well I can’t wait to go ice fishing,” said Matt fighting back tears while sitting next to his wife on their couch. “Jamie tells her that we can’t go this year.”

Their 7-year-old daughter Claire broke down, Jamie said. Her first ornament — a spoon with pink crystals on it — was gone. Jamie now spends time looking for the mementos online. Not just for her daughter’s sake but for her husband too who is batting terminal cancer.

“The other stuff can be replaced,” Jamie said. “This may be our last Christmas together as a family.”

Two weeks ago, Matt was released from the hospital  at the University of Michigan after being there for a month receiving treatment for adrenal gland cancer. He was diagnosed with it in August 2016, three years after he was diagnosed with a brain tumor. Now he’s on hospice care and has difficulty speaking and walking.

“We can’t get any good luck,” Jamie said. “It seems like everything keeps going wrong with the devastation of Matt.”

Then recently they discovered that their 4-year-old son, also named Matthew, has a genetic mutation that is susceptible to cancer. Both Matt’s father and brother had it as well and passed away from cancer.

“It’s hard to wrap my head around all of that,” Jamie said. “Even benefits [are] being denied with our insurance sometimes. And then we run into issues with the VA benefits denying stuff all the way around.”

However Jamie’s not giving up looking for the ornaments. She’s looking non-stop. When she vented on Facebook about what happened, family, friends and strangers offered to buy her replacements including snowblowers. She was overwhelmed. However the ornaments were priceless.

“We just wanted our ornaments back,” she said. “They don’t mean anything to anybody else. They mean something to us.”

***If you have information regarding the ornaments or other missing items, Jamie requests  you message her on Facebook here.***