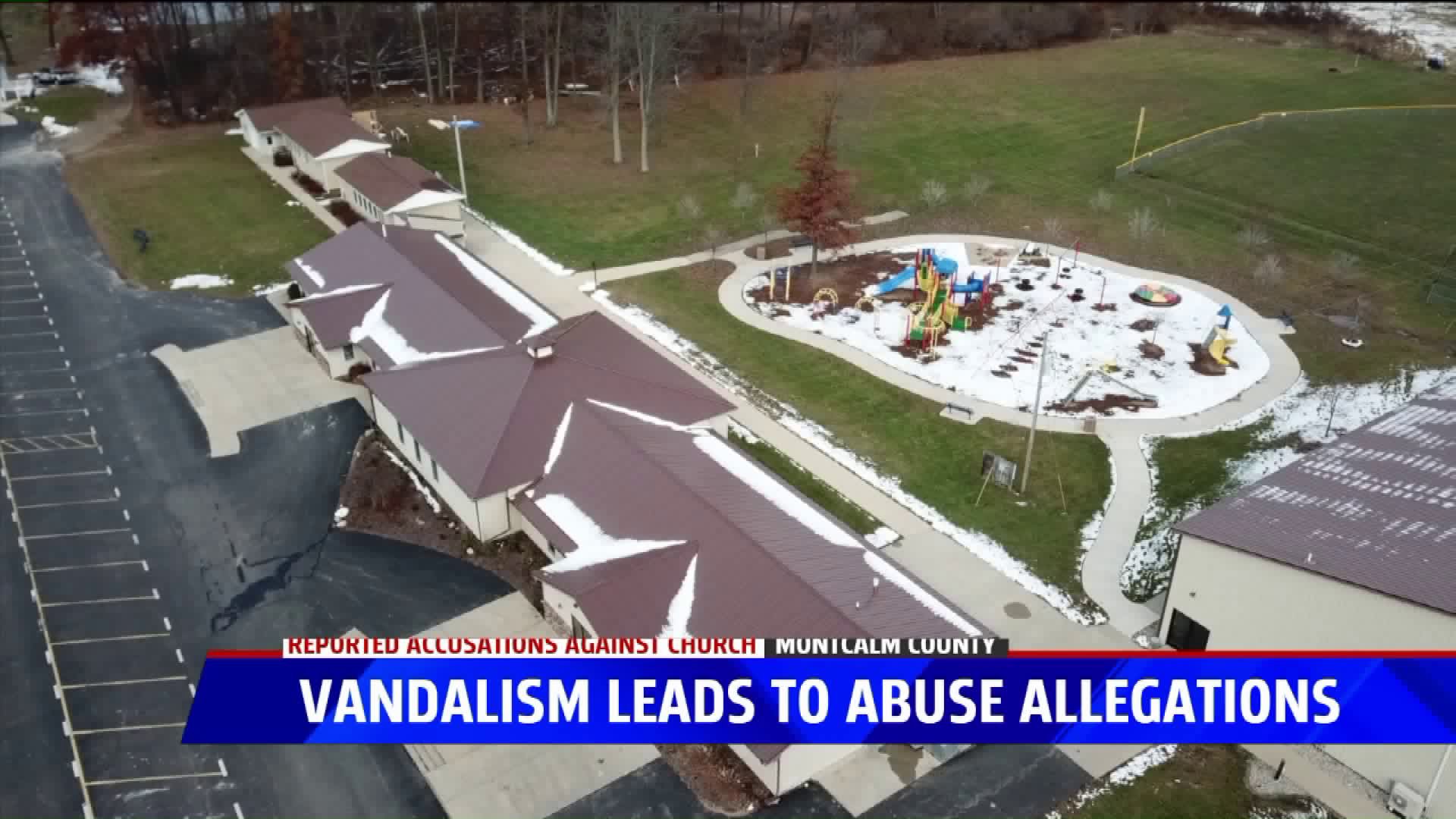 CARSON CITY, Mich. -- Disturbing allegations are surfacing against a Montcalm County church after a vandalism complaint and arrest in late October.

The alleged motivation behind that crime led to emails and calls from former church members, alleging a hidden world at the Church of Carson City. The concerns include alleged crimes that have gone unanswered for decades.

54-year-old Anna Morris was arrested for the vandalism. Former church members say she also used to be a member. Those same people shared allegations of the church covering up crimes of sexual abuse for decades, allegedly controlling the lives of its members for almost 50 years at the hands of a few men they call 'elders.'

Some who've left the church, some not by choice, hope their stories will stop this secluded community from hurting others.

Along Fish Creek in Carson City stands a church and school. It's a place of worship and community for some, but for others, it's where they say their nightmares began.

"They took everything from me," said former member Elizabeth Cummings.

"It's a horrible place that has the label 'church' on it," said Peter Michelsen, Elizabeth's brother and another former member. "It should never be called a church because it is a cult."

Some who have left the Church of Carson City are now coming forward; some a few years after leaving, others decades later. But all of them are sharing the same message.

"He scares me that he would lead the people to drink the Kool-Aid, he would be that type of person,” said Jessica Moser, Peter and Elizabeth's oldest sister who left the church 10 years ago.

"They will say that they are God’s only people, the only people that they know of that are chosen, which is one of the things that makes it a cult.”

A so-called 'cult' they say started by Lee Sherman in the 1970s. Its members are often called 'Shermanites' by locals.

"My first memory of him was my mother telling me 'Be careful when you hug Lee Sherman, he has a problem with young girls,'" said Moser.

"The mother of one of the girls gave their daughter to him for sexual favors," said Cummings.

Several former members claim Sherman assaulted women and children, telling FOX 17 he lost his title as head of the church when he was caught raping a young girl.

"Pretty much when you’re an elder, you’re an elder for life unless you’ve done some sort of horrible sin that you get it taken away," said Dan Newhall, a former church member who claims he was kicked out of the church and told he couldn't return unless he gave up his nursing degree.

It's a crime they say was never reported to police. Sherman's exit, they say, is when Bill Hubler took over.

"My stepmom even told me one time that Bill is like a god and I’m like, 'Whoa whoa whoa, don’t ever say that to me again,'" said Newhall. "They definitely believe he is something more than just mere man like the rest of us.”

"Bill Hubler was someone to be feared," said Michelsen. "We were always scared of him.  At times he would play nice and try to make you feel comfortable around him, but he was the one that would ruin your life.”

Peter Michelsen says he was isolated as a teenager when the elders found out he was gay. He says he was forced to eat meals alone in his room when he was 14 and was kicked out for good when he was 19 and told to never return.

"I had lost 19 years old my life," said Michelsen. "It was just ripped from me and I would never see it again. My friends, my family, it was gone.”

His older sister Jessica Moser says she was sexually assaulted for years.

"Between the ages of seven and nine I was molested," said Moser.

Moser says Bill Hubler knew who was responsible and did nothing.

"The pastor has a legal and moral obligation to report this," said Moser.

Their other sister Elizabeth ran away from the church at 15 and got pregnant. Scared and alone, she decided to go back, but upon her return she says she was denied an education and forced to say she was raped outside of the church as a scare tactic to the other girls.

"I had to sit in a room with several male elders and tell every detail of my life outside of the cult and they wanted to know all kinds of sexual details," said Cummings. "They do this and it's some kind of sick pleasure they get from it.”

These siblings are just three of several people who've come forward with these kinds of allegations; allegations we questioned church leadership about on Monday, including Bill Hubler's nephew.

"Anybody can tell lies about anybody and that’s what they are is lies," said Billy Hubler.

"They’re untrue. Absolutely," said Jacob Jeffries, who is an elder in the church, according to former members. "There’s hundreds of other people that used to be in the church that would give you a completely different testimony. Twenty is a pretty small number.”

Bill Hubler did not come to the door when his comment was requested.

His alleged predecessor, Lee Sherman, died more than 20 years ago. He is buried in Bloomer Cemetery in Carson City just a few yards away from Peter Michelsen’s father's grave.

Sherman's grave is smeared with allegations Peter believes to be true. Peter's story, his siblings and others. all coming forward after Anna Morris' alleged vandalism in late October.

"She’s all of us," said Michelsen. "It's what all of us want to do to that place. All of us would’ve wanted revenge, all of us would want to burn that place to the ground, but we don’t. We’ve worked on healing ourselves, but they’ve pushed somebody far enough to where they snapped.”

Those FOX 17 spoke with say they want the church shut down and the truth exposed.

"To see this place crumble and have no one else destroyed anymore would be my dream," said Michelsen.

Michigan State Police in Lakeview say before this vandalism incident, they had never even heard of the Church of Carson City, let alone allegations of sexual abuse or any other activity.

An attorney working with some church members says a police investigation did take place a few years ago, but nothing ever came of it. FOX 17 is looking into that claim further.