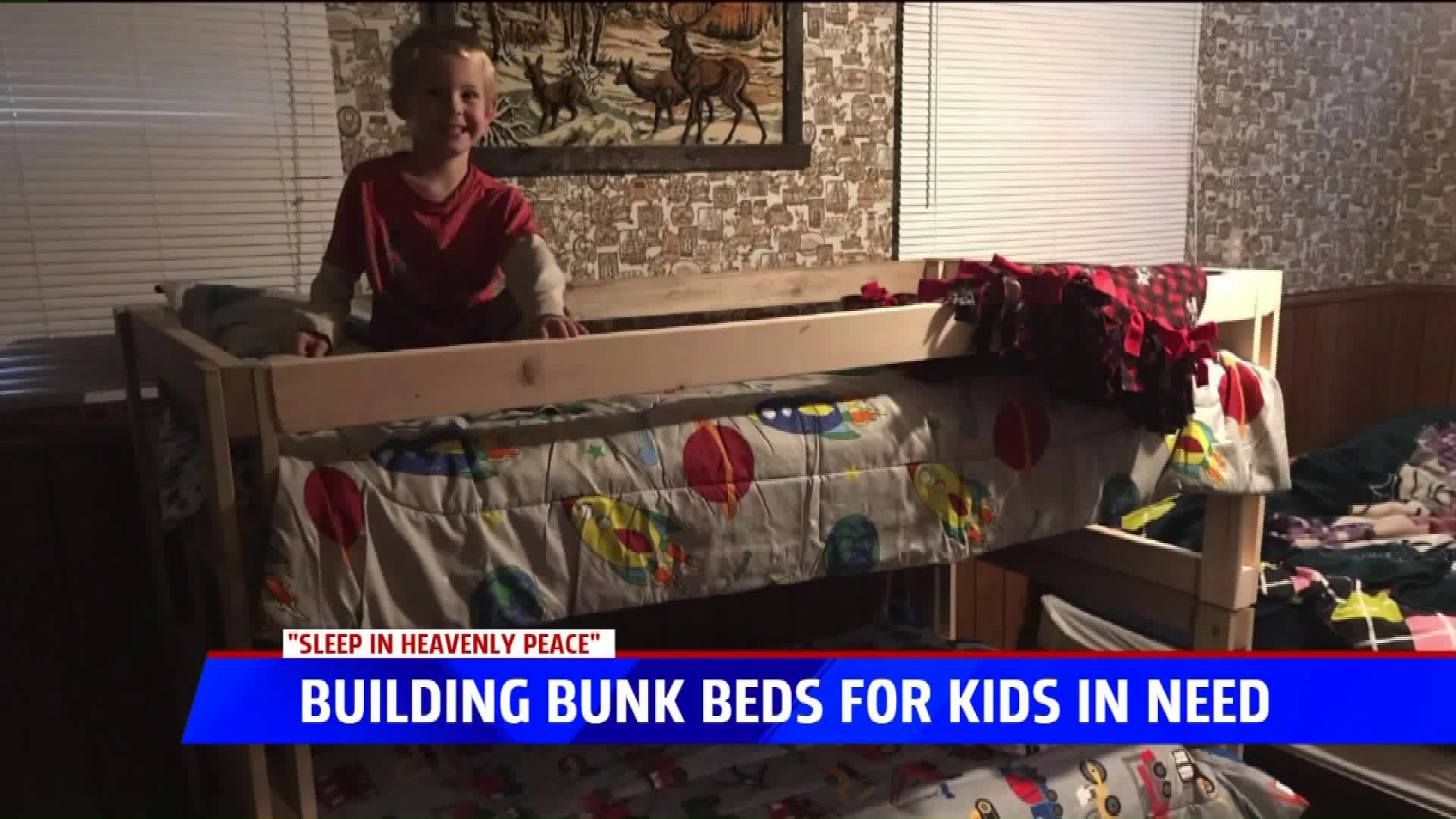 KENT COUNTY, Mich.-- A group of volunteers met on Friday night in Kent County to build bunk beds for kids in need.

The organization Sleep in Heavenly Peace builds bunk beds for kids who are otherwise homeless or sleeping on the floor or a couch. It’s a national group, but they have a chapter in Cedar Springs that’s working to make positive changes in their own backyard.

Volunteers were hard at work cutting and sanding at Gerber Collision in Comstock Park on Friday night. The group, Sleep in Heavenly Peace in Cedar Springs hosted their second volunteer building night.

“We are an organization that brings the community together to build bunkbeds for children who are sleeping on the floor," said Sue Thompson, the Chapter Director of Sleep in Heavenly Peace- Cedar Springs. "That's really hard to stomach as a mom and a lot of these moms are in situations beyond their control too.”

Sue Thompson says homelessness is a huge problem in the area, adding that there’s 62 homeless families in cedar springs alone that need their help.

“We recently found out there’s two million homeless kids in the country who are sleeping on the floor at grandma’s house," said Thompson. "My husband and I decided we could do something about it.”

So far, they’ve built bunkbeds, complete with a mattress and bedding for 14 kids in Cedar Springs. On Friday, they started on 10 more.

“These kids don’t deserve some of the things that they’ve been handed," said Thompson. "It’s not their fault, but we can do something about it. One child at a time, and you can see the smiles on their faces some days and it’s just amazing to watch it come together.”

“What a better way to open your doors than for something like this?" said Ryan Martin, general manager of Gerber Collision in Comstock Park.

Ryan Martin along with his staff, as well as a few from other Gerber Collisions volunteered their time along with nearly 30 other people.

“That’s pretty cool," said Martin. "Looking back a week or so ago thinking you know Friday night, you’re tired from work and all that, but I feel great that we’re all here doing this on a Friday night. It’s really really cool.”

Each bed costs 150 dollars to make, so the cost of 10 bunk beds has a 3,000 dollar price tag, coming entirely from donations.

"It doesn’t take long," said Martin. "If it only takes a few hours a night every month to make a huge difference in someone’s life, yeah it’s worth it for sure.”

"It’s a matter of taking care of kids in our world and reaching out to those that need it the most," said Thompson.

Thompson says a lot of the tools they use were donated to them by Lowe's and Flo’s Pizza donated a bunch of pizzas for the volunteers.

If you want to help out by donating or volunteering, visit the group's website. If you’re also in need of assistance, there’s information there for how you can get help.