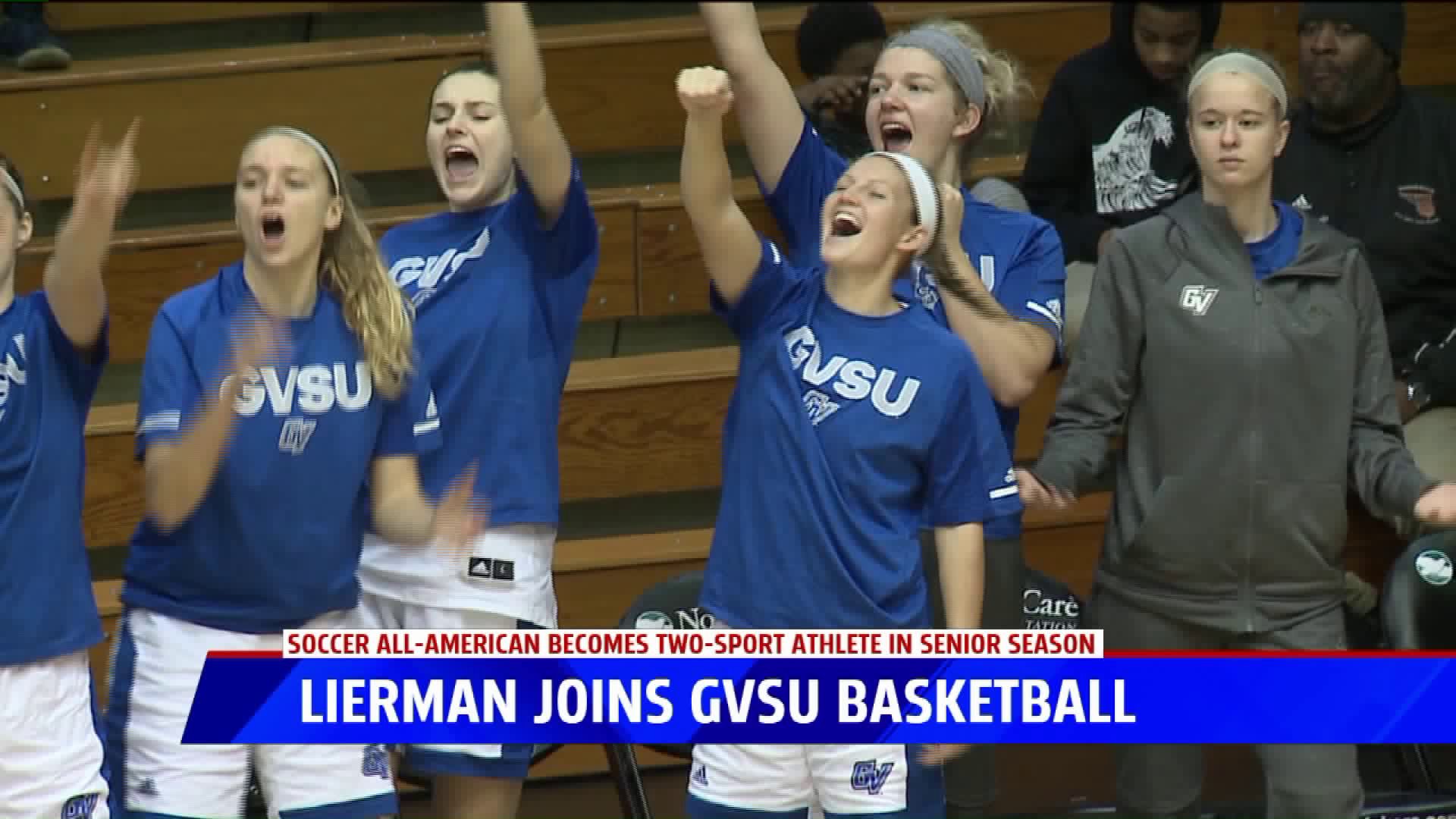 ALLENDALE, Mich -- Tara Lierman had a dominant senior season on the basketball court at Holt High School and was even up for Michigan's player of the year award. However, Lierman had already committed to play soccer at Grand Valley and that's what her heart was set on.

"It was pretty tough," Lierman said, "we're a big basketball family and I grew up playing since kindergarten so it was in my blood. My family really wanted me to play basketball but soccer was where my heart was at."

Four years and three National Championship appearances later, Lierman's soccer career at Grand Valley had taken off. In fact, this past fall she was once again recognized as an All-American but she wasn't ready to end her collegiate athletic career just yet.

"I talked to Coach Sayers a little bit in October," she said, "he was like 'just go finish your season, finish out hard and when you're done with your season come into my office and talk to me.'"

So she did. After helping the Lakers reach another National Championship game which unfortunately ended in a loss, Lierman went back to Sayers and even after a lengthy soccer season, expressed interest in joining.

"We decided to have her join our team for a seven day tryout period and see if things were working," head coach Mike Williams said.

And Lierman fit right in. Not only did she prove to be talented enough to join the roster, she was a seamless fit with the girls on the roster.

The Lakers are now 11-1 overall and have won eight straight games. In fact, in Saturday night's 99-30 win over NAIA-level Lourdes University, Lierman didn't just see game action, she also hit a three pointer in the fourth quarter for her first points as a college basketball player.

"It was pretty cool, it's a player that has always dreamed of playing college basketball and didn't have the opportunity because she's such a dynamic soccer player," Williams added. "Just to see her be rewarded for all of the things she's done was really cool and our bench erupted, they thought it was the neatest thing on the planet as well."

The players gave Lierman a lot of love after her first points.

"It was amazing," she said, "these girls are just so family oriented, that's what the coolest thing about this is, nobody is selfish, that's why I love being here is we're all here for each other and it's fun to be a part of."

Lierman may not play major minutes for the Lakers or even see the floor during a game but she still makes an impact for the five on the court with her energy and passion on the bench.

"I just want to give the most energy on the bench as I can and lift other players up, tell them good job and give them some energy," Lierman said.

And her leadership is second to none. Lierman was a captain on the soccer team and continues to show everything she brings to a team.

"She's a leader and a proven winner," Williams stated, "she provides energy for us, I think it's been a cool thing to have her on the team and our players have embraced it."

Lierman credits soccer coach, Jeff Hosler for her leadership skills which are now on display on the hardwood.

"That's what Jeff Hosler instilled in me is being part of something bigger than you, embracing it and loving every second of it."

And if you see Lierman during a game or even in pregame warmups, the smile is contagious, she truly is loving every second of being a member of the Grand Valley women's basketball team.