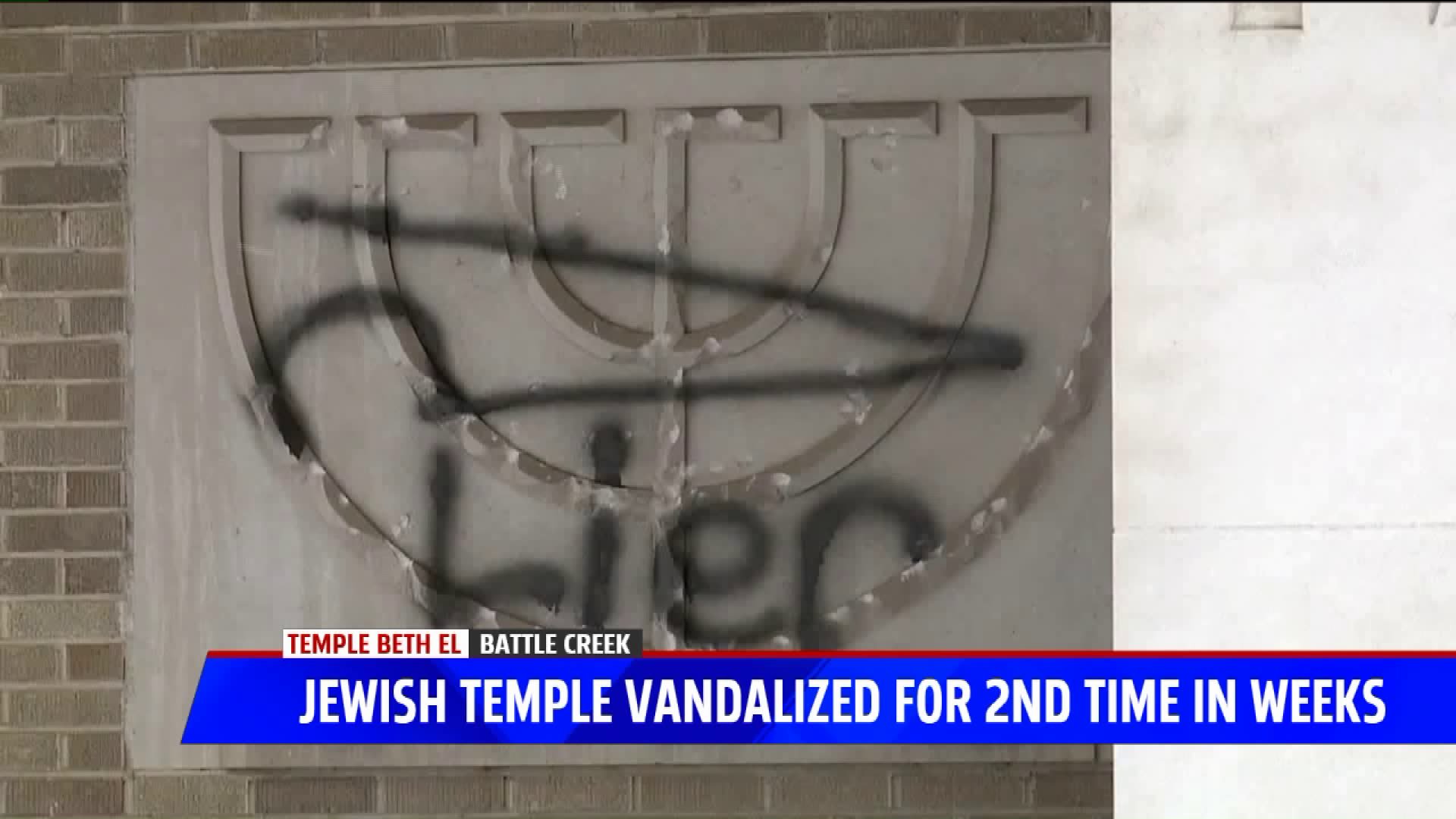 BATTLE CREEK, Mich. — Troy Zukowski said he was at a Torah study on Saturday when he found out that Temple Beth El had been vandalized with spray paint. He was shocked that it even happened the first time in late November.

“I was thinking ‘is this person watching us as we were coming in and out of the building,’” Zukowski said during an interview in front of the Battle Creek Police Department. “You start to ask some questions and wonder about things that you may not have otherwise.”

Zukowski said he grew up in Battle Creek and went to school with the children of members from Temple Beth El. He's since moved away and has a family of his own. However he can’t believe that it happened in his hometown again.

“I don’t know the motivation of the individual or individuals or the group,” Zukowski said. “But it’s scary because it hits close to home.”

According to Battle Creek police this is the second incident of vandalism that’s happened at the synagogue since November 23. That day they were notified that the stone menorah, near the front entrance, was damaged.

“It looked like somebody took something and chunked some concrete out of the front of the building where the menorah is,” said BCPD Lt. Jim Martens during an interview at headquarters.

The latest incident happened over the weekend, Lt. Martens said. Synagogue officials notified police that a symbol resembling a knife or dagger with the word Lier written under it was spray-painted on the menorah over the weekend.

“We know that approximately 24 hours prior to that, 1:30 Saturday afternoon there was no spray painting on the front of the building,” Lt. Martens said. “We don’t have any eye witnesses at this point to anything that has occurred.”

However, they are investigating the incident, he said. They're specifically looking at that symbol and what it means. They’ve sent it to agencies both in the U.S. and abroad hoping to get some indication into its significance.

“Nobody is able to distinguish it as anything that is formally recognized as a hate symbol,” Lt. Martens said. “It could mean something personally to the person that did it. It could be non-sense writing.”

BCPD chief Jim Blocker said in statement that the second act appeared "hateful." However Zukowski believes it is a hate crime.

“I do consider it a form of domestic terrorism,” Zukowski said. “It’s violence against property of course but the effect is to try to scare and intimidate people.”

Officials at the Temple declined an interview with FOX 17. They’re speaking through the Anti-Defamation League in Detroit. The regional director Carolyn Normandin released a statement  saying in part:

“The destruction of property at Temple Beth El in Battle Creek is vile and must not be tolerated. (…) We commend the police department for taking action to investigate the incident, and we hope law enforcement will be successful in finding out who committed this despicable act.  The Anti-Defamation League stands with the Battle Creek Community and we will continue to fight hate in all forms.”

Lt. Martens said the Temple had no known enemies nor had any "hateful letters" sent to them. Police are looking for the people responsible for the incidents. Zukowski hopes they’re caught soon and that justice is served.

“I would hope that their conscious would start to kick in and they realize that this is really hurtful to do to others,” Zukowski said. “I don’t think that they would appreciate that being done to them.”

***Police are asking that if you have information about either incident, or see someone lurking around Temple Beth El, to please call the Silent Observer at (269) 964-3888.***