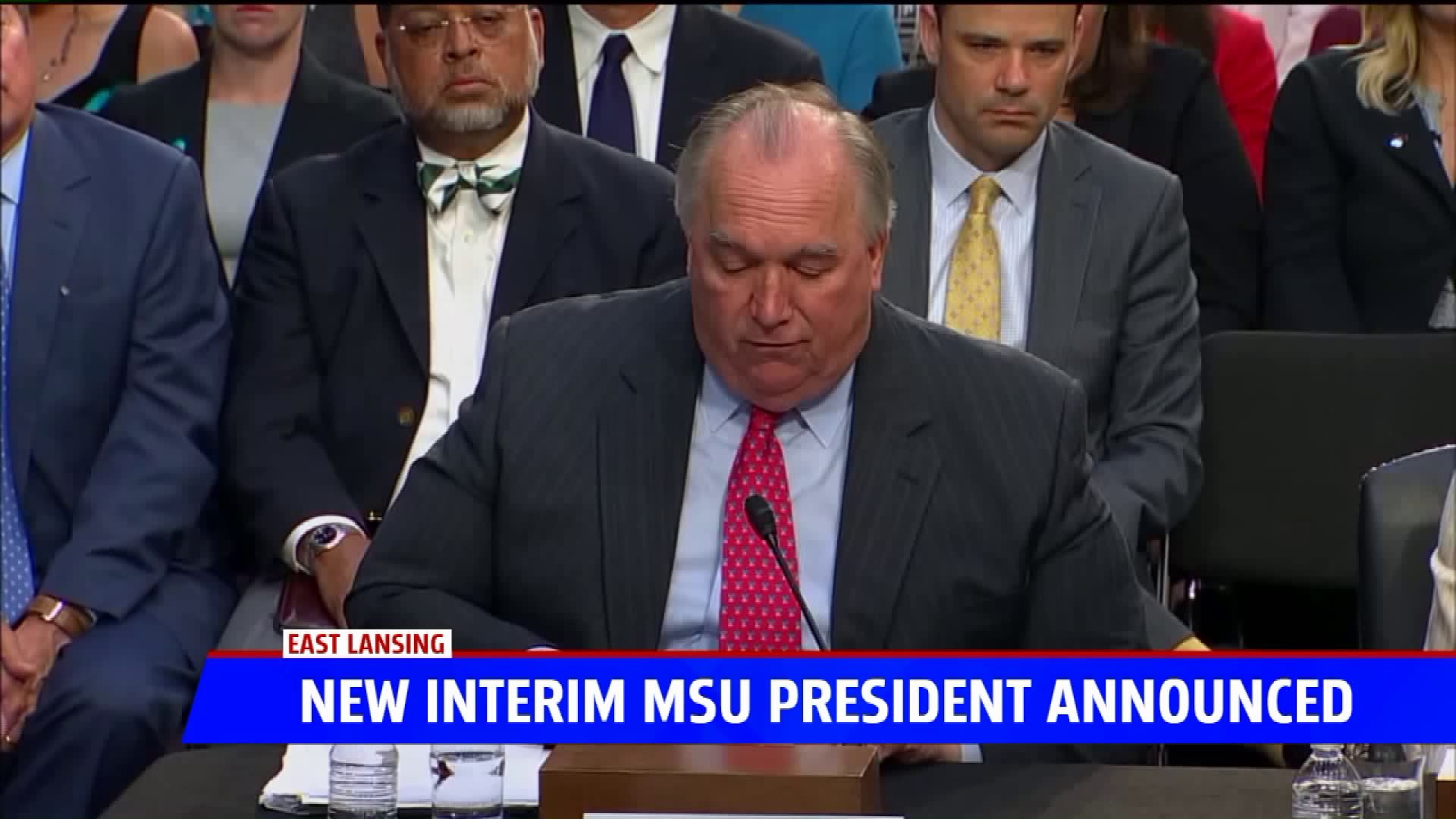 DETROIT (AP/FOX 17) — The former governor brought in to help Michigan State recover from the Larry Nassar sexual abuse scandal resigned Wednesday as the school's interim president amid backlash over his comments about some of the ex-sports doctor's victims.

The board moved to name current executive vice president for administration services Dr. Satish Udpa as interim president while the university searches for a new president.

John Engler, who had resisted earlier pressure to resign, announced his plans in an 11-page letter to Dianne Byrum, chairwoman of Michigan State's Board of Trustees. It makes no mention of recent criticism of his remarks and instead lists what he considers to be his accomplishments in his one year of service, saying the university is a "dramatically better, stronger institution."

Engler said he was in Texas attending a service for his late father-in-law. His resignation, which he said he was making at the trustees' request, is effective on Jan. 23 but chairwoman Byrum moved to have his resignation effective immediately.

With his sudden reversal, Engler joins a long list of people — including his predecessor as president — who have been fired, forced out of their jobs or charged with crimes amid fallout from the school's handling of the once-renowned sports doctor stretching back decades.

The final straw for the university's board came last week when Engler told The Detroit News that Nassar's victims had been in the "spotlight" and are "still enjoying that moment at times, you know, the awards and recognition."

The AP left messages Wednesday seeking comment from Engler, who was hired last February following the resignation of president Lou Anna Simon over the Nassar scandal.

Brian Mosallam told The Associated Press Wednesday that "the votes are there" to force Engler out at a special board meeting scheduled Thursday at the school in East Lansing.

Byrum stopped short of confirming that she asked Engler to resign but told the AP "he has a decision to make" because the board is poised to name a new interim leader at Thursday's meeting. Both Byrum and Mosallam are Democrats, and Engler is a former Republican governor.

Mosallam, a long-time Engler critic, said Wednesday on Twitter that "JOHN ENGLER'S REIGN OF TERROR IS OVER." His tweet followed a post by Byrum announcing Thursday's meeting.

After Engler was hired by the board, Michigan State agreed to a $500 million settlement with 332 women and girls who said they were sexually assaulted by Nassar. Of that, $75 million will cover future claims.

In April, Engler told another university official in emails that Rachael Denhollander, the first woman to go public with her accusations about Nassar, was probably getting a "kickback" from her attorney.

Denhollander told the AP Wednesday that her hope is that the board "is signaling at least the beginning of a true change in direction and tone. And in order to do that, they have to deal with the person they put in place."

She said who Engler was and how he operated "was no secret in Michigan." The former board — five members remain and three are gone — picked Engler "for a reason," she said, and it "needs to take responsibility for what they did."

Her biggest concern with Engler's tenure has been what he has "communicated about abuse," Denhollander said. "What he has communicated is that survivors who speak up will be attacked and blamed and shamed, that those who push for change are going to be accused of enjoying the spotlight, that they will be lied about."

The elected board has five Democrats, two Republicans and an appointee who was named last month by then-Gov. Rick Snyder. The board's makeup became more Democratic in the November election. Engler, a Michigan State alum, served as governor from 1991 through 2002.

The university fired Nassar in 2016, two years after he was the subject of a sexual assault investigation. He also worked with the U.S. Olympic gymnastics team.

Hundreds of women and girls, most of them gymnasts, accused Nassar of molesting them when they sought treatment during his time working for Michigan State and USA Gymnastics, which trained Olympians.

A special prosecutor in December accused Michigan State of stonewalling his investigation into the school's handling of the scandal. Bill Forsyth released a report that said the school fought the release of certain relevant documents and released others that were heavily redacted or irrelevant. It says such actions hampered the investigation.

"Their biggest concern was the reputation of the university," Forsyth said at a news conference.