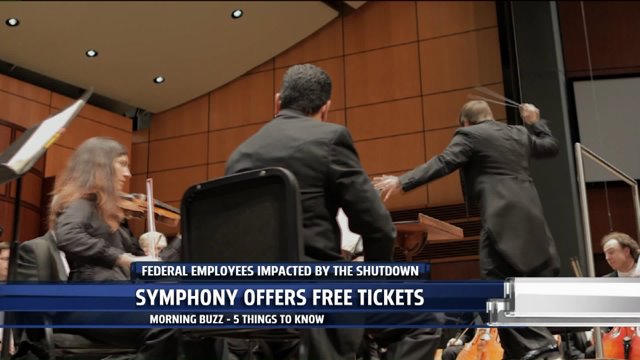 1. Are you or someone you know affected by the government shutdown? The Grand Rapids Symphony wants to lift the spirits of those affected by offering two free tickets to any concert for anyone currently going without a paycheck.

There's also the option of four free tickets if they plan to go to a family series.

The symphony says it plans to give the free tickets until 30 days after the shutdown ends.

2. Another fun thing to do this weekend? A two day ice skating fest!

The Annual Great Skate Winterfest is being put on by the Grand Rapids Griffins starts Friday night after the team's game at Rosa Parks Circle.

Players will skate with fans for 24 consecutive hours, starting at 10 p.m Saturday until 10 p.m. Sunday. Money raised will benefit the Griffins Youth Foundation.

3. Police across southwest Michigan are asking for help to support the Special Olympics by taking a cold dip for the annual Polar Plunge in Berrien County.

This year the event will be held at watermark brewing company in Stevensville. The money raised will go to Special Olympics Michigan.

Registration to take the plunge opens at noon on January 26, with the first people jumping in at 2.

There are other events being held across the state including Muskegon. To find an event near you, visit plungemi.com.

4. Some little tail waggers are pushing that "cuteness overload" button! A litter of endangered African Painted Dogs, are taking over Binder Park Zoo.

Their mom was moved to the zoo with the intention of breeding thanks to a partnership with the species survival plan. Considered an endangered species, there is only an estimated 5,000 African Painted Dogs left in the world.

Visitors will get their first chance to see the pups in April, when Binder Park Zoo opens for the year.

5. Diet Coke is coming out with two new flavors! Starting next week, Coke lovers can enjoy the flavors of Blueberry Acai and Strawberry Guava.

The new flavors will come in a 12 ounce skinny can. It's all part of the flavor group which was launched last year.