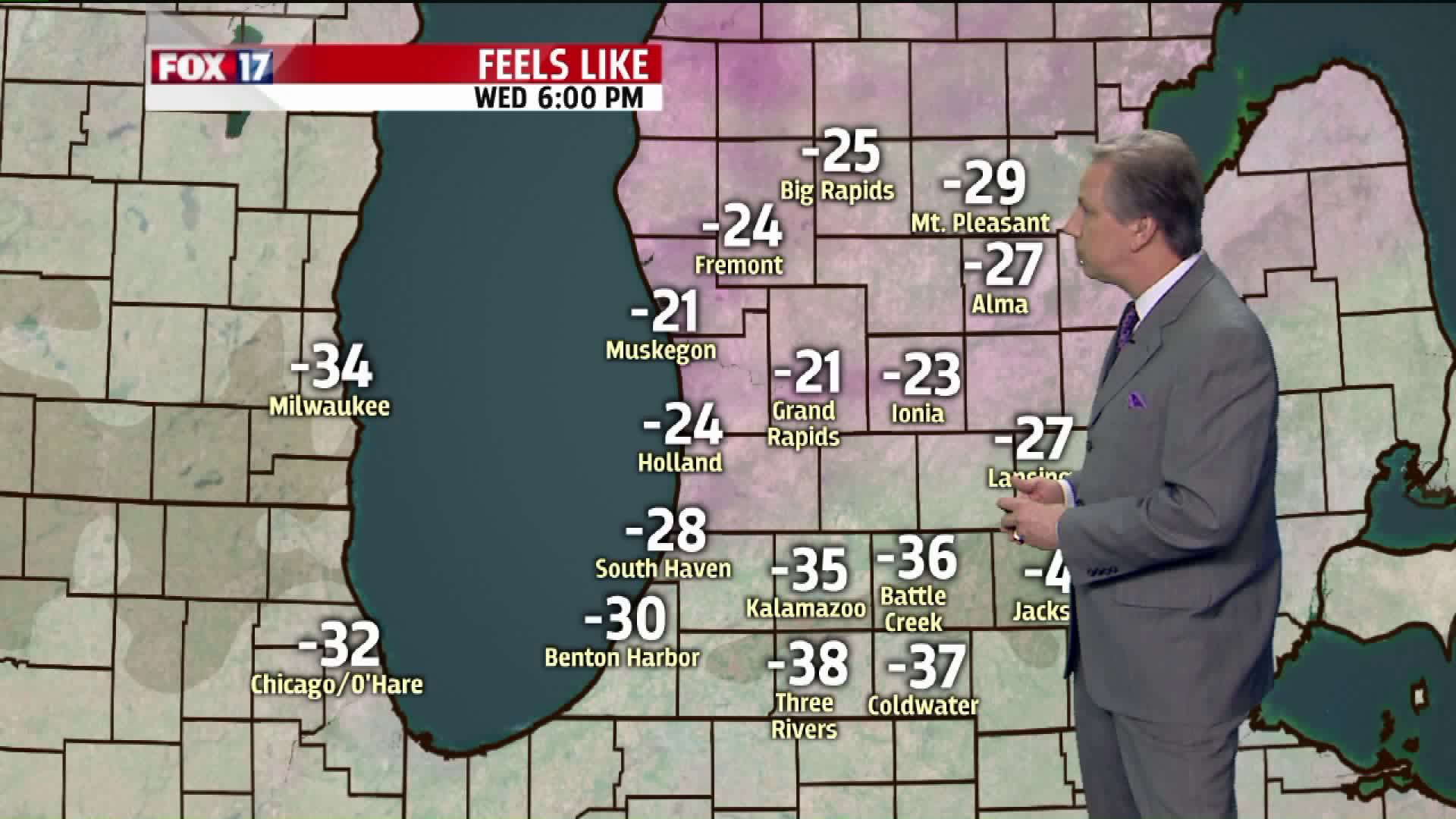 WEST MICHIGAN -- The first part of this week's wild winter weather is over. A strong, clipper system generating a widespread six inches of snow or more across much of the area is now taking most of the snow with it.

See map below of WINTER STORM WARNINGS and WIND CHILL WARNINGS...most expire Thursday at 1 p.m. We should note that the winter storm warnings are two-fold...they encompass the lake effect snow AND the wind chill warnings!

Take a look below at our snow accumulation map through Wednesday. We believe the potential for heavy lake effect snow is likely...especially along/west of US-131 with strong westerly winds.

These winds will likely drag the snow further inland (than normal) and even areas along/east of US-131 will see some accumulation. We are expecting a swath of about 6" to 10" of lake effect snow in our immediate lakeshore counties, while the next tier of counties eastward will be in the area of about 3" to 6".

The lightest amounts will be farther away from the lake across Mecosta, Montcalm, Ionia, Eaton, and Calhoun Counties where 1" to 3" is expected.

Coupled with that snow? Temperatures at/below zero and wind chills on the order of -25 to -35. Dangerous cold, a threat to all public safety, and frostbite possible in less than 15 minutes.

See wind chill forecast below. Graphic is valid for Tuesday at 6 A.M.

Our next wind chill graphic below is valid for Tuesday at 6 P.M.

While some of our area will be influenced by Lake Michigan and this Arctic air mass may warm slightly, locations not under the influence of the lake such as Battle Creek, Three Rivers, and Coldwater, may see wind chills plummet to -45 to -50 degrees. See wind chill forecast below valid for Wednesday at 6 A.M.

Most high temperatures will NOT get above zero on Wednesday, but winds will be strong. We will likely break a high temperature record set in 1899 where it reached only 4 degrees on January 30. That alone speaks to the serious nature of the cold and long standing record. The final wind chill graphic below is valid for Wednesday at 6 P.M.

These are dangerous, life-threatening wind chills...please treat them as such. Frostbite is possible in as little as 15 minutes or less! Limit outside exposure and stay inside if possible. The core of arctic air and polar vortex arrive Tuesday night into Thursday morning as seen below. Please be safe!