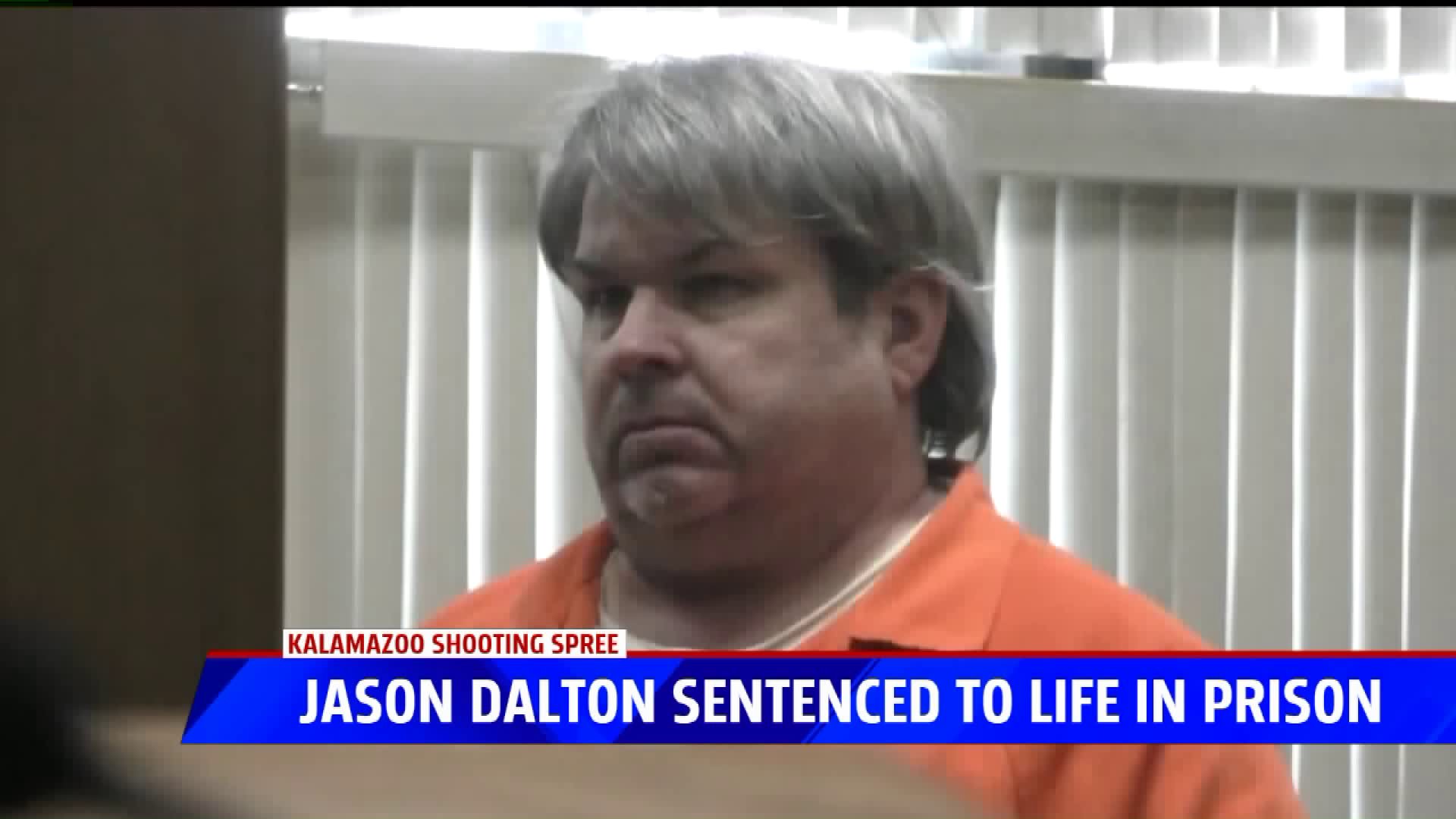 Dalton sentenced to life in prison

KALAMAZOO, Mich. — Courtroom D at the Kalamazoo County Courthouse was packed Tuesday morning. The benches were filled with dozens of family members who lost loved ones in a shooting spree in mid-February 2016.

Ten of them stood at a podium and spoke to the gunman, Jason Dalton, during his sentencing.

“I’ve lost the woman I married for 41 years, and I lost my little sister,” Christopher Nye said. “The world has lost two women whose only goal in life was to take care of children.”

“You even took away my will to live for a while,” said Laura Hawthorne, niece of Barbara Hawthorne. “I now fear the dark, open parking lots, and being alone. And for a long time I wanted to know why. Why? Why her? Why those ladies? Why the others?”

Laura looked directly at Dalton and repeatedly asked “Why?” Dalton sat in an orange jumpsuit, motionless, next to his defense attorney, Eusebio Solis.

“My mom, Judy Brown, was one of the most generous, gentle, kind-hearted people one could imagine,” said Jeff Reynolds. “So when I learned someone had not just mistreated her, but ended her life in such a terrifying and gruesome way, for her to meet her ending moments in this way is unthinkable.”

Emily Lemmer recalled the moment she learned about the deaths of her father and brother. She said it was 3 a.m. the next day when she woke up to her mother yelling outside her apartment door. The next thing she remembered seeing was “sea of lights” and a detective telling them both  that her loved ones had been shot and killed while they looked at trucks at the Seeyle dealership on Stadium Drive. Hours later, she and her mother Laurie Smith drove to the funeral home to see Rich and Tyler one last time. “Seeing them laying there lifeless was absolutely heartbreaking. Hugging and holding my dad’s cold body is a nightmare that will haunt me for the rest of my life,” Emily said, crying. “Kissing my brother’s cold, pale forehead will never leave my mind, and even though I needed to see them in order to force myself to realize they were truly gone, it still causes me pain.”

It’s the same pain felt by her mother. Laurie sat in the courtroom and cried as her daughter gave her victim impact statement. When it was her turn, the tears continued.

“I still text and call their phone numbers out of habit, only to get no response and then to remember why,” Laurie said with tears rolling down her face. “I turn around in my home and call their names out of habit when I wish to share something with them. I yearn for someone to talk to, but not just anyone -- my husband or my son.”

She said it makes her sick to her stomach thinking of the way they died with someone shooting them.

The night of the shooting, Tiana was returning home from an afternoon at the park with her young daughter and other children when Dalton drove near them and began shooting. She put her body in between Dalton and the kids and told them to run.

“The young ladies have something to say as well. Kaniya, my daughter: 'If I had something to say to Jason Dalton, I would say do you really feel my pain?'" said Tiana, reading her daughter’s statement. “'Probably not. You really hurt my heart for all the hate you’ve done to me.'”

After all the statements, Dalton stood up before Judge Alexander Lipsey and was sentenced to life in prison without the possibility of parole. He left for correctional facility that afternoon.

“Today was a difficult day for a lot of us,” said Kalamazoo County Prosecutor Jeff Getting during a press conference afterwards. “The goal always has been since, February 20, 2016, to be able to stand here today and say that Mr. Dalton will serve the remainder of his life in prison without the possibility of parole.”