Another round of Freezing Rain on the way 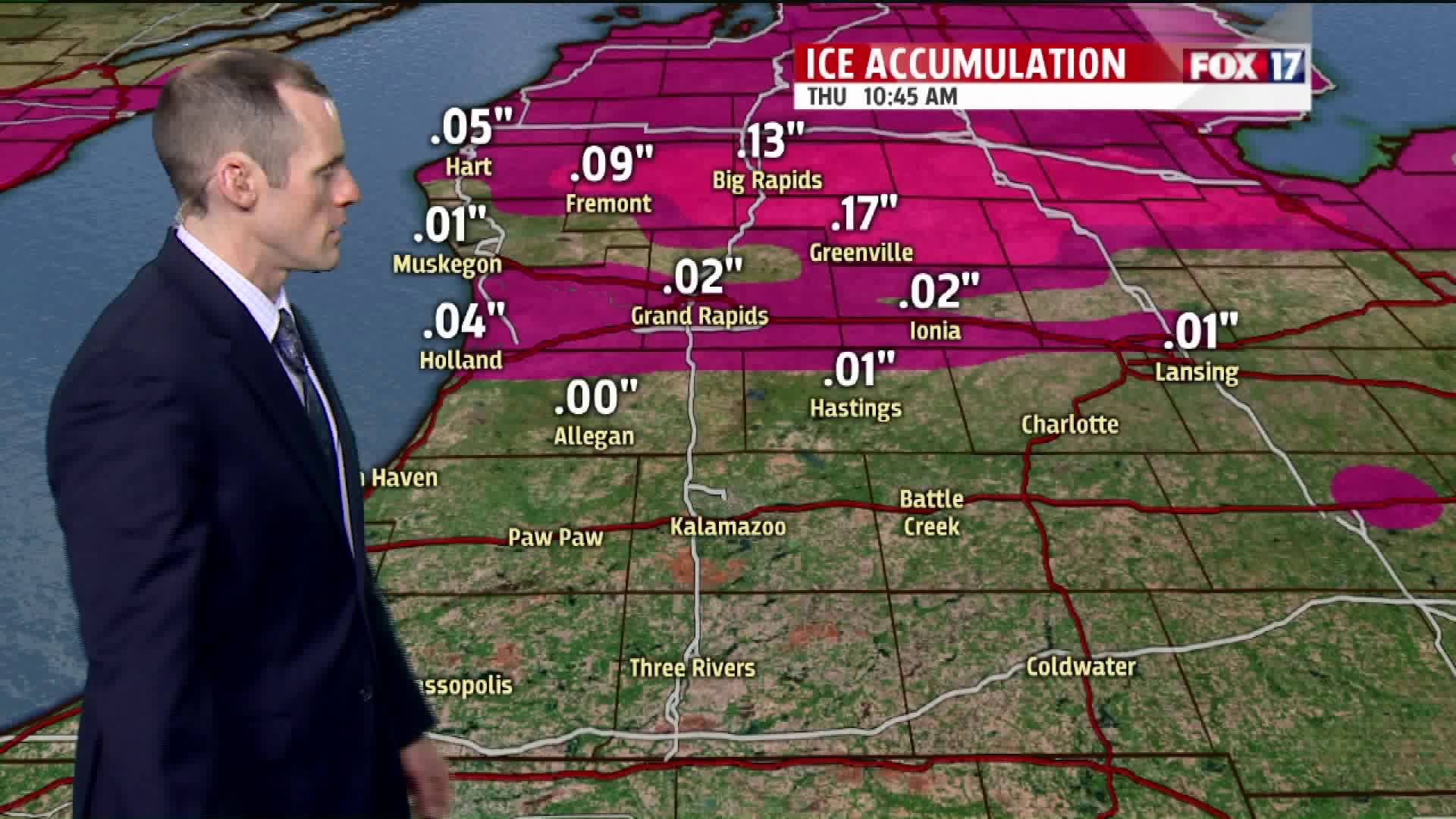 WEST MICHIGAN -- The National Weather Service (NWS) has extended the Winter Weather Advisory for much of the FOX 17 viewing area -- including Grand Rapids -- through noon Thursday. After getting up to 0.4" of ice late Tuesday night into Wednesday morning, another round of freezing rain is expected over our central and northern counties. Here is a look at what we saw in terms of ice accumulation last night:

The next round of freezing rain is expected to move in late tonight -- mainly after 10:00 PM -- and last through much of the morning tomorrow:

As the above image shows, areas along and north of I-96 will see the biggest impacts with freezing rain being indicated by the pink color. Warmer air surging into our southern counties will ensure mainly liquid rainfall from Allegan, Barry, and Eaton counties southward, shown by the green colors.

Well to the north of I-96, the freezing rain could hang on through much of the afternoon as the sub-freezing temperatures stay around longer there:

For this reason, the Winter Weather Advisory goes through 7:00 PM Thursday for Mecosta, Montcalm, Newaygo, and Oceana counties. This same advisory expires at noon Thursday for Ottawa, Kent, Muskegon, and Ionia counties:

Here is a look at forecast ice accumulations overnight into Thursday morning via our RPM model:

Although the above forecast pales in comparison to the nearly 0.4" ice accumulation reports that we received last night in parts of West Michigan, the above amounts can still have a major negative impact on secondary roads and sidewalks. Although treated surfaces should remain in good shape through this period, people should still expect a slower commute to work Thursday morning due to icy secondary roads and wet to slushy primary roads and interstates.

Much of the area will see temperatures in the 40s to lower 50s Thursday afternoon, with the warmest temperatures along and south of I-94. This thaw will be brief, however, as a strong cold front will slam the area late Thursday night. For a look at a colder weekend forecast with more snow and a possible flash freeze on Friday morning, be sure to tune in to FOX 17 for updates!