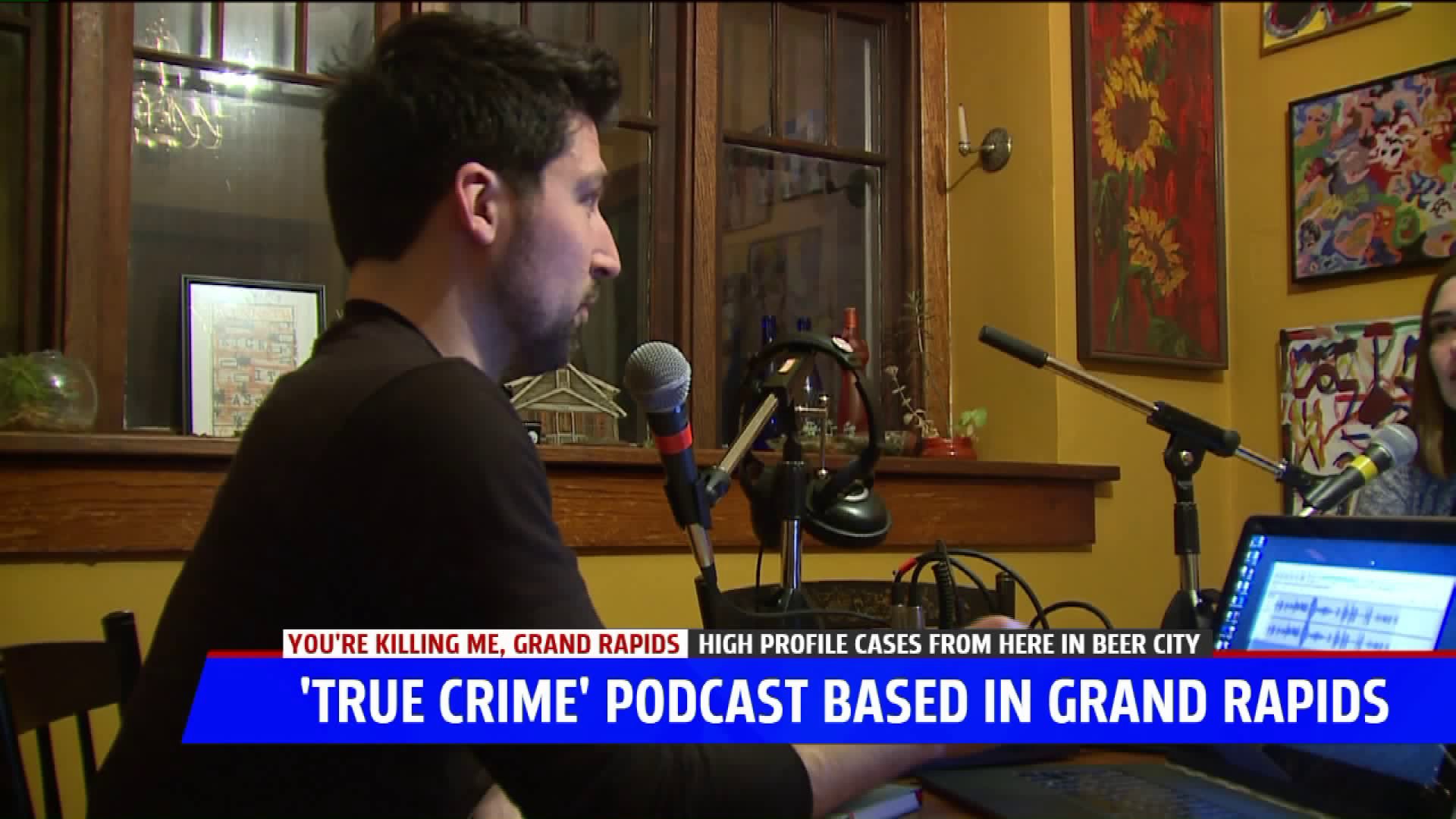 GRAND RAPIDS, Mich. — The true crime trend has taken the world by storm the last few years. Documentaries and podcasts about serial killers and murder cases are released regularly.

A duo from Grand Rapids is getting into the true crime game by starting their own podcast called "You're Killing Me, Grand Rapids." The podcast isn't exactly kid-friendly, the hosts recommend listening to it when you're alone or with headphones.

Each episode, the hosts discuss high-profile murder cases happening in West Michigan. The subject matter is dark and close to home, but they say they've only received positive feedback so far.

Dara Garvin and Kenny Cutler are jumping headfirst into true crime podcasting. The friends met working at a bar in 2011 and immediately bonded over their love of true crime and local lore: things usually taboo to talk about.

"My dad let me watch horror movies when I was like 5 years old, so that could’ve turned out in a really horrible traumatic way for me, but luckily I love it," said Garvin. "I’ve always been a fan of  creepy stories and ghost stories and murders. True crime has really blown up."

Both of them bonded over podcasts like "Serial" and "My Favorite Murder" and Netflix shows like "Making a Murderer."

Just recently, they decided to start one of their own.

So far, they’ve released three episodes; each of them covering a different murder case; everything from cold cases, mass shootings and serial killers.

"We usually each pick a murder or murders," said Garvin. "Sometimes there are multiple victims. The cases happen in Grand Rapids or the West Michigan-area.”

"We’re about to do our fourth episode and we are nowhere near running out of stories," said Cutler. "I don’t know if that’s a good thing or a bad thing.”

"Apparently just a few blocks away someone held a crime school in the woods for up-and-coming little boys to commit crimes and murders around town," said Cutler.

"I covered a crazy cold case that was pretty much solved by a professor at Hope College making a documentary about it,  which is insane," said Garvin.

"I was about to bring up Professor David Schock who has become a personal hero of ours," said Cutler.

The hosts understand the subject matter isn’t for everyone.

"There’s a lot of gory details, there’s a lot of swearing on my part, sorry, so it’s not necessarily kid-friendly, I would stress to the public," said Garvin.

But they say there’s a reason true crime has taken over.

"I’m interested in this stuff, I can talk about this stuff," said Cutler. "I’m not going to kill anybody. It makes you wonder what’s the breaking point, like you’re trying to relate to this person in a really weird way."

They add it’s their way of coping with some of their city’s dark history.

The pair says they plan on releasing an episode every other Sunday. The next one will be out Feb. 17. They hope to get into Grand Rapids lore and ghost stories to see if there’s any history or truth behind any of the tales they’ve heard since they were kids.

You can listen to their first three episodes on their website, or on Apple podcasts. They hope to be available on other podcast platforms by the end of the month.