Court docs: Mom had history of mental illness before murder-suicide 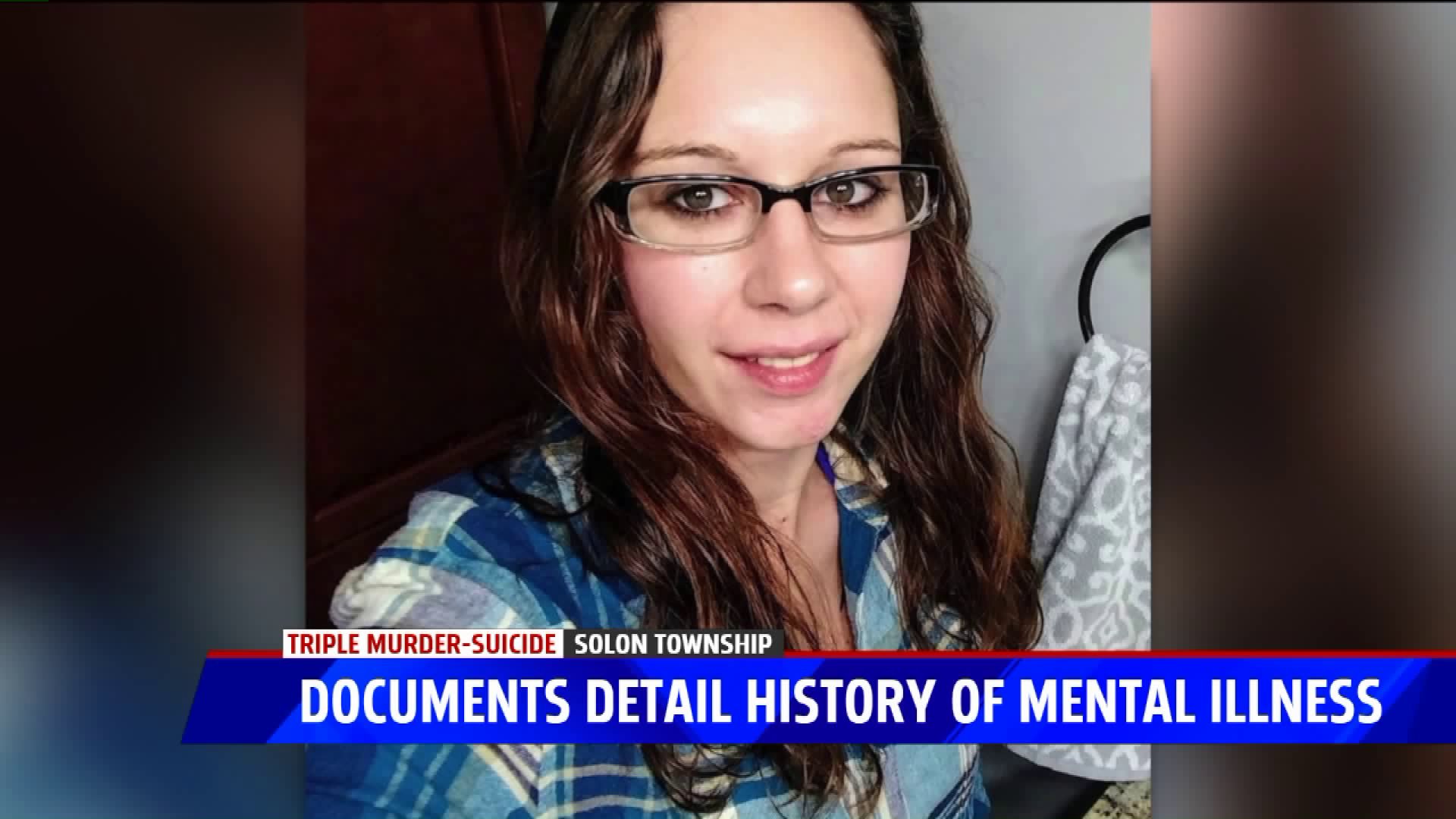 SOLON TOWNSHIP, Mich. — The woman who investigators say shot and killed her three children had a history of mental illness, according to court documents.

The bodies of 28-year-old Aubrianne Moore and her three daughters were found Monday in the driveway of a home in the 200 block of 19 Mile Road near Division Avenue in Solon Township.

On Wednesday, authorities said evidence shows Moore shot and killed her three daughters, 8-year-old Kyrie Rodery, 6-year-old Cassidy Rodery, and 2-year-old Alaina Rau behind a building behind a home in the 300 block of 19 Mile Road.

Authorities say Moore then put her children into a vehicle and drove them back to their home before taking her own life.

Court documents say Moore wasn’t eating because she thought her food was contaminated, keeping her kids home from school because the TV told her there would be a school bus crash, and staying awake at night out of fear people would break into her home.

The social worker petitioned the probate court in Newaygo County to have Moore receive 60 days of in-patient treatment at Forest View Hospital in Grand Rapids. It’s not clear if Moore underwent treatment or for how long.

The petition for mental health treatment also says Moore was diagnosed with “unspecified schizophrenia,” and a physician said she had an inability to understand her need for treatment.

Moore was discharged on deferral status Sept. 28. It’s not clear if she sought treatment after her release.

Moore's daughters remained in her custody, despite the diagnosis. It is unknown if Child Protective Services was contacted. The department says it can't comment on specific cases, only the circumstances in which they would need to be contacted.

“The Michigan Child Protection Law has requirements for people who are mandated reporters to report suspected child abuse and neglect to our Child Protective Services, said Bob Wheaton, public information officer for the Department of Health and Human Services. "There are a number of different individuals who are named due to their role and involvement with children who are classified as mandated reporters.”

“The law specifically says that its suspected child abuse and neglect that needs to be reported, so something where there’s a mental health issue involving a parent where there isn’t child abuse and neglect, that isn’t necessarily something that a mandated reporter would be required to report because that’s not stated in the law as far as something that has to be reported," said Wheaton.

Two of Moore's daughters attended Tri County Area Schools, who said they had no knowledge of Moore's mental illness. The superintendent released the following statement to FOX 17:

"The school district was never provided with any court orders or other records restricting Mom’s access to her children, including her right to pick them up from school. To our knowledge, Mom had sole legal custody of the children and there were no court orders restricting her custodial rights. Law enforcement is investigating, and we cannot comment further at this time."

Newaygo County Mental Health was listed in court documents to supervise Moore's alternative treatment. They told FOX 17 they couldn't comment on Moore's case specifically for confidentiality purposes, but said if they suspect future neglect or abuse in any case, they report those allegations to CPS out of an abundance of caution.