‘Let Rian be Rian’: Raising a ‘theyby’ in West Michigan 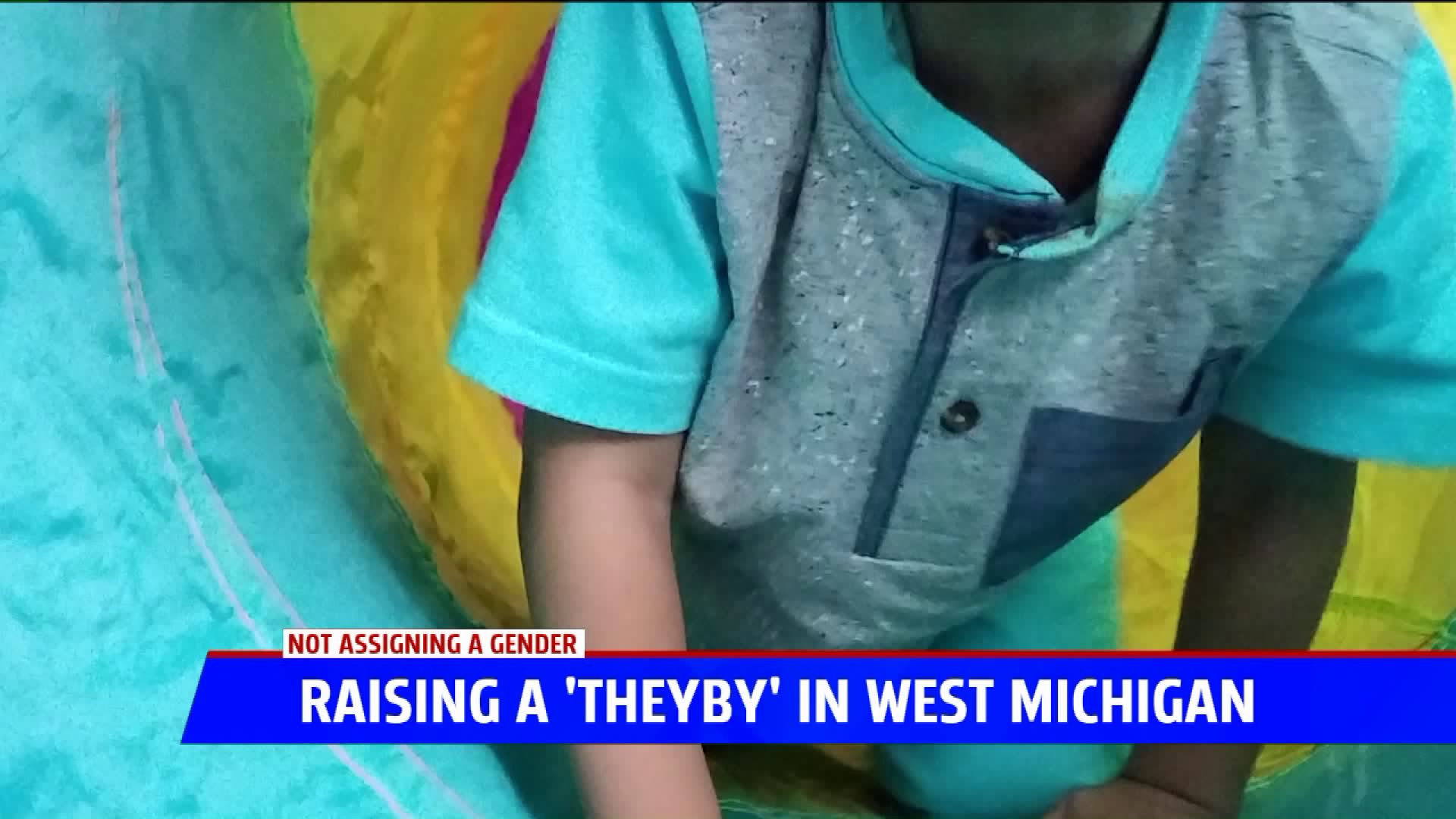 GRAND RAPIDS, Mich. — It's the big question after a family learns they're pregnant: is it a boy or a girl?

However, instead of biology dictating the expectations that come with being either, some parents are choosing not to assign their child a gender right away. It’s a small but growing group raising “theybies.”

It’s a choice that’s undoubtedly raising eyebrows, and certainly won’t fit into every family’s lifestyle, but it is working for Jazz and Drea McKinney in Grand Rapids.

By using "they or them" more often "him or her” exclusively, the McKinneys are hoping to free their 4-year-old, Rian, from social expectations based on their sex.

Rian, dressed in spaceship socks, colorful leggings, and a Valentine’s Day sweatshirt during FOX 17’s interview, loves to sing, dance and play games with their friends and family.

Jazz and Drea aren’t new to the parenting scene. They’ve already raised two of their family members, but knew when it was time to have a child of their own, they wanted to do things differently.

“The biggest craze right now is gender reveal parties, you know ‘is it blue or is it pink?’ and that just never felt right to us,” Jazz McKinney said.

The couple found out Rian’s sex while dealing with medical appointments during a high-risk pregnancy. They only told a few close friends and family.

When it came time for their baby shower, they had one rule: no pink or blue gifts. Period.

“Don’t assume anything about our kid, if you want to buy us clothes, buy us all the clothes,” Jazz McKinney said. “There’s nothing wrong with green or tan or yellow.”

Licensed Professional Counselor and Therapist with GR Therapy Group, Kerry Prior, said oftentimes gender and sex get confused for being the same thing, when in fact, they are not.

The goal for theyby parents is to create an early childhood free of gendered ideas of how a child should dress, play, act and be.

Parents taking this approach can be on a spectrum, ranging from not telling anyone,the sex of their child, to still using “he/she” pronouns, but not limiting what toys kids play with or what they wear based on their anatomy.

“Toys are just toys right? They’re not gender-specific necessarily, we impose that on our toys,” Prior said.

The McKinneys say they want just want Rian to be Rian.

“We gave that space to be able to play with trucks, but wear skirts, play in the mud and never really made a big deal out of it,” Drea McKinney said.

It’s all part of self-expression and self-awareness.

“Since they could talk, they said ‘I feel like I’m both a boy and a girl, I feel like I like a lot of boys things, and a lot of girl things,’” Jazz McKinney said of Rian.

Theyby parents will make it clear, they aren’t saying their kids will never establish their gender, but are simply letting the child explore what gender means to them until they decide what they identify with best.

“Science, research, everything has proven that kids know who they are and it’s just getting them to have the language,” Jazz McKinney said.

One big question a lot of people have is if the concept could be confusing to a young child, and if letting them “choose” their gender is too big of a burden to bear?

In short, Prior said kids usually settle into one gender or another before elementary school.

“We will see kids between the ages of 3 and 5, they’re really going to start expressing what preferences they like,” she said.

As far as what long-term effects this could have on a child, Prior said there’s little, to no research about that. However, she said research shows strict gender constructs can have long-term effects on children, both good and not-so-good.

“We can see men who have a more difficult time expressing themselves, to women who are less assertive,” she said.

That may be especially true for people who don’t feel their sex and gender assigned at birth matches up. That's something Ellie Webster, the President of the GR Pride Center, knows too well.

“I knew when I was 5 years old that I was not male. It was always very fake, very much this persona, this mask that I wore all the time,” she said.

Webster, who fully transitioned to becoming a woman about four years ago, said perhaps if she had been raised in a more gender-open environment, she may have avoided decades of depression and suicidal thoughts.

Webster says accepting her authentic self was the best thing she’s ever done.

“People started treating me as me, and that was a big deal and incredibly freeing.”

The McKinney’s said while they give Rian the freedom to express themselves, Rian doesn’t run the show.

“Our child gets disciplined, very well,” Jazz McKinney said. “They know right from wrong, they know what to do, what not to do.”

Prior cautions parents about some of the challenges they may face.

Prior also said parents may also have to consider other social aspects.

“Teasing, the bullying, things like that is something we’d be concerned about, but at the same time, do we really want to cater to that kind of poor behavior?”

The McKinneys talk to Rian openly about gender pronouns and Rian is very aware of their anatomy. While Jazz and Drea are determined to raise Rian as gender-neutral as possible, that’s not what is most important to them.

Prior isn’t suggesting that every family should give this parenting style a try, acknowledging that it simply isn’t for everyone.

However, she also said there’s no harm in exposing your kids to all different toys, colors and experiences.