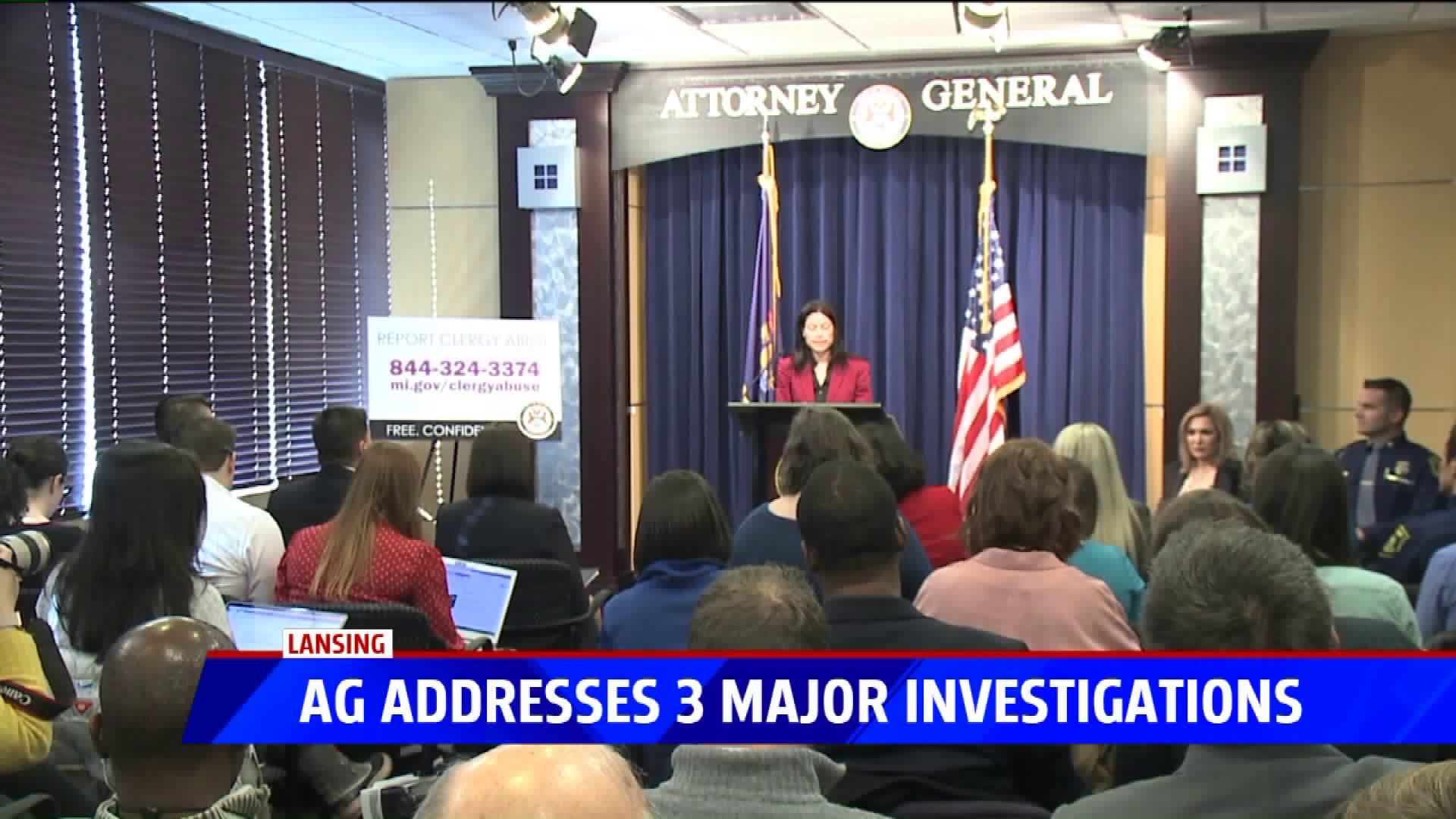 LANSING, Mich. (AP) — Michigan's new Attorney General Dana Nessel said Thursday that an investigation into sexual abuse by clergy in the Roman Catholic Church will be lengthy and could uncover more than 1,000 victims in Michigan over the course of decades.

Among the news — her office is taking over an investigation of former U.S. Olympic women's gymnastics team coach John Geddert, and investigators are looking into the circumstances surrounding former MSU trustee George Perles' resignation.

The three major probes, she said, are not over.

Here's a look at the top developments in each:

She said her office has asked Michigan's seven dioceses to suspend their own internal reviews until the investigation — which began last summer and could take two years — is complete. She said such "self-policing" can interfere, and investigators have heard "many stories" of victims being encouraged to sign non-disclosure agreements to stay quiet.

"Victims may believe they cannot or should not report abuse to us because the church is going to handle it. Simply put, that's just not true. If you signed an NDA, you still have a right and I would say a responsibility to speak to law enforcement authorities," said Nessel. She said there may be more than 1,000 victims in Michigan and that the breadth of the probe will help unearth cover-ups in which accused priests were moved to other parishes.

The Archdiocese of Detroit said in a statement that the attorney general's office hasn't asked it to halt its internal review, but that it looks forward to working with Nessel to clarify "some of the broad generalizations" that were made during the press conference.

"These internal investigations are required under Church law, and their purpose is to restrict or remove from ministry anyone who has committed sexual abuse of a minor or vulnerable adult," it said. The archdiocese said it immediately notifies law enforcement when it learns of an allegation of sex abuse against minors.

It said it has not entered into an NDA since 2002, unless specifically requested by a victim, and that it doesn't enforce NDAs that were signed before 2002.

Nessel announced that her office will investigate unspecified complaints against Geddert, who owned and operated Twistars, a Lansing-area gym where former sports doctor Nassar offered treatments. Eaton County Prosecutor Doug Lloyd had been reviewing whether to file charges.

During Nassar's 2018 sentencings, some victims complained that Geddert was physically abusive and indifferent to injuries, and forced them to see Nassar. He has insisted he had "zero knowledge" of Nassar's crimes.

Nessel said Lloyd did everything in his power, but that victims trust the attorney general's office after its successful prosecution of Nassar.

"They felt as though we might get more information and people might feel more willing to come forward if the case were handled by this office," she said, adding that her office has more manpower and previously charged three other former Michigan State officials.

Nessel also again pressed MSU and its board to waive attorney-client privilege and turn over more than 6,000 unredacted documents to investigators. Her office wants to interview former interim school president John Engler, who was hired in the aftermath of the Nassar scandal but was forced to resign last month over his comments about victims.

Nessel said she is working to settle 79 lawsuits filed against the state or its employees by Flint residents — a departure from former Gov. Rick Snyder's bid to dismiss the suits. Gov. Gretchen Whitmer, a Democrat, would have to authorize financial settlements.

Unlike former Attorney General Bill Schuette, Nessel will be involved with the civil litigation rather than the criminal probe that led to charges against 15 people related to lead-contaminated water or a deadly Legionnaires' disease outbreak. Seven defendants have pleaded no contest to misdemeanors. Their records eventually will be scrubbed clean.

Solicitor General Fadwa Hammoud, who has been leading the Flint criminal investigation for more than a month, announced that Wayne County Prosecutor Kym Worthy and her office will help investigate and prosecute the cases. Special prosecutor Todd Flood, whose law firm the Republican Schuette hired to lead the probe, will remain involved.