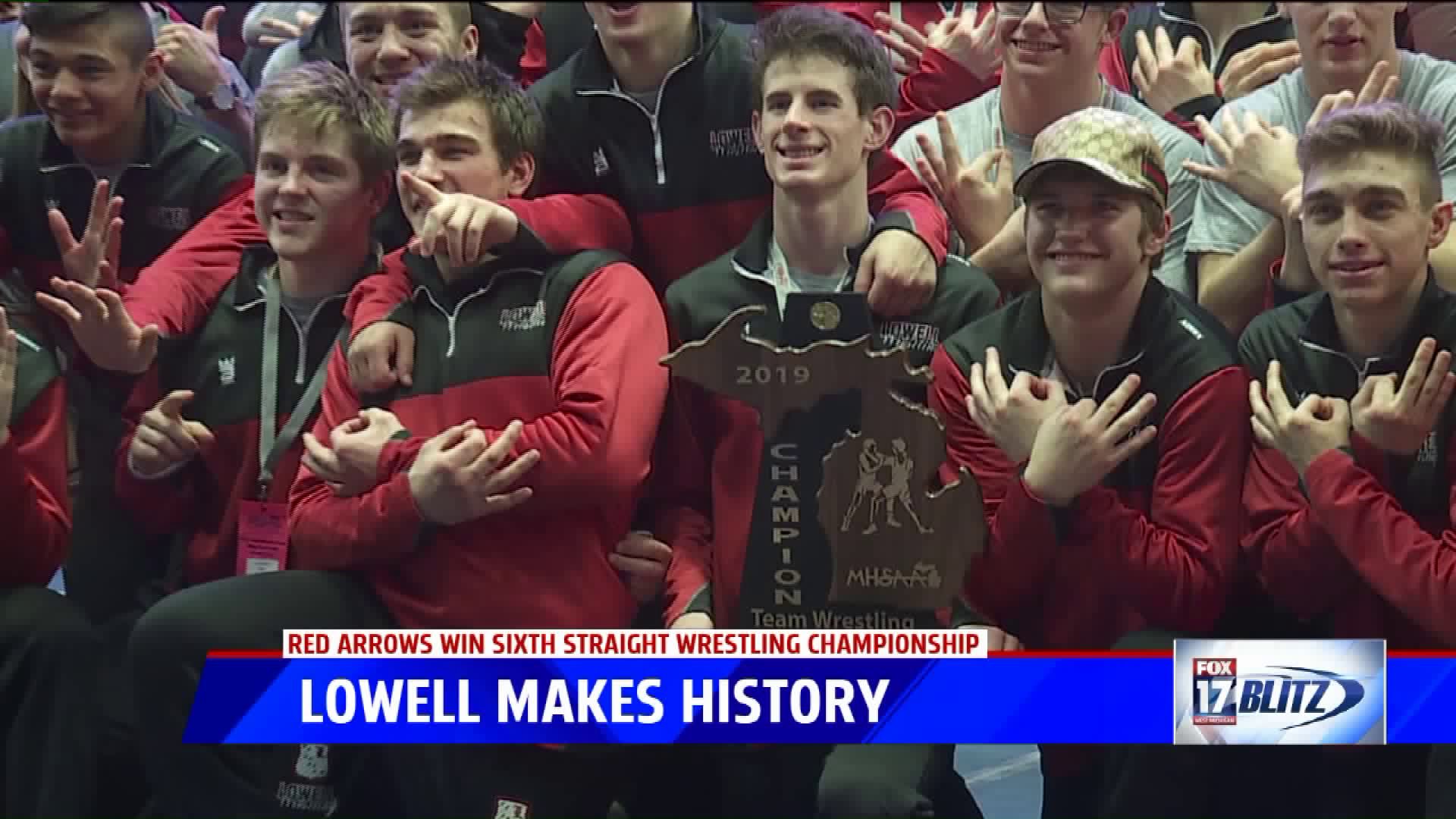 KALAMAZOO, Mich -- The Lowell Red Arrows are officially in the state record books after winning their sixth straight wrestling team state championship on Saturday afternoon, but it didn't come easy. The Red Arrows led Goodrich, 26-23 with one match remaining in the 135-pound weight class and it was Lowell senior Jeff Leach who took the mat and won a 9-2 decision, sealing the deal.

"It's really nerve racking to think that your team winning a state title is down to you," Leach smiled afterwards, "I had a lot of nerves walking into it but my coaches told me to leave it all on the mat. It's my last year here so I might as well make the most of it," he added.

Leach isn't a stranger to the big moment in the state championship, however.

"Two years ago, we beat Tower, it came down to him and he pulled it out," Lowell head coach R.J. Boudro said, "he has a lot to talk about for the rest of his life, being able to say 'I've won two state titles last match of the dual.'"

The Red Arrows become the only team in state history to win six straight championships in team wrestling.

"It's never been done before," Boudro added, "team wrestling has been around for a long, long time and L:owell is the only team ever to do it. It takes hard work across many levels: administration, our kids, our youth program, our coaches, our parents, so many things."

Despite winning so many championships, the players don't get tired of the feeling.

It truly was a team effort across the board, the Red Arrows scored on bonus points and then there's junior Nick Korhorn, who pinned his opponent to give Lowell a 26-13 lead and the momentum.

"It's amazing, one of the best feelings ever," Korhorn said, "we did it last year, did it again this year, it's amazing, a great feeling."

The Red Arrows feature a set of incredible brothers as well in senior Avry Mutschler and freshman Ramsy Mutschler. Avry has had the experience of winning a few state championships  before but this is a little bit different being next to his younger brother.

"I don't even know how to describe it," Avry smiled, "we've done it four times since I've been in high school but every year it's surprising, it's even better to have Ramsy here with me."

And the feeling is mutual for his younger brother.

"It means a lot to me," Ramsy said, "it's super exciting to be able to actually do it with him, the moment I can't even describe it, it's just fun and so awesome."

Even with the close finish, confidence certainly wasn't lacking for the Red Arrows.

"I knew we had it, Jeff's the man," Nick Korhorn said regarding Leach's decision to claim the dual and the championship.

The Red Arrows officially end their season with a 22-3 overall record and they only graduate seven seniors on a really good team as they look to make it seven straight next season.