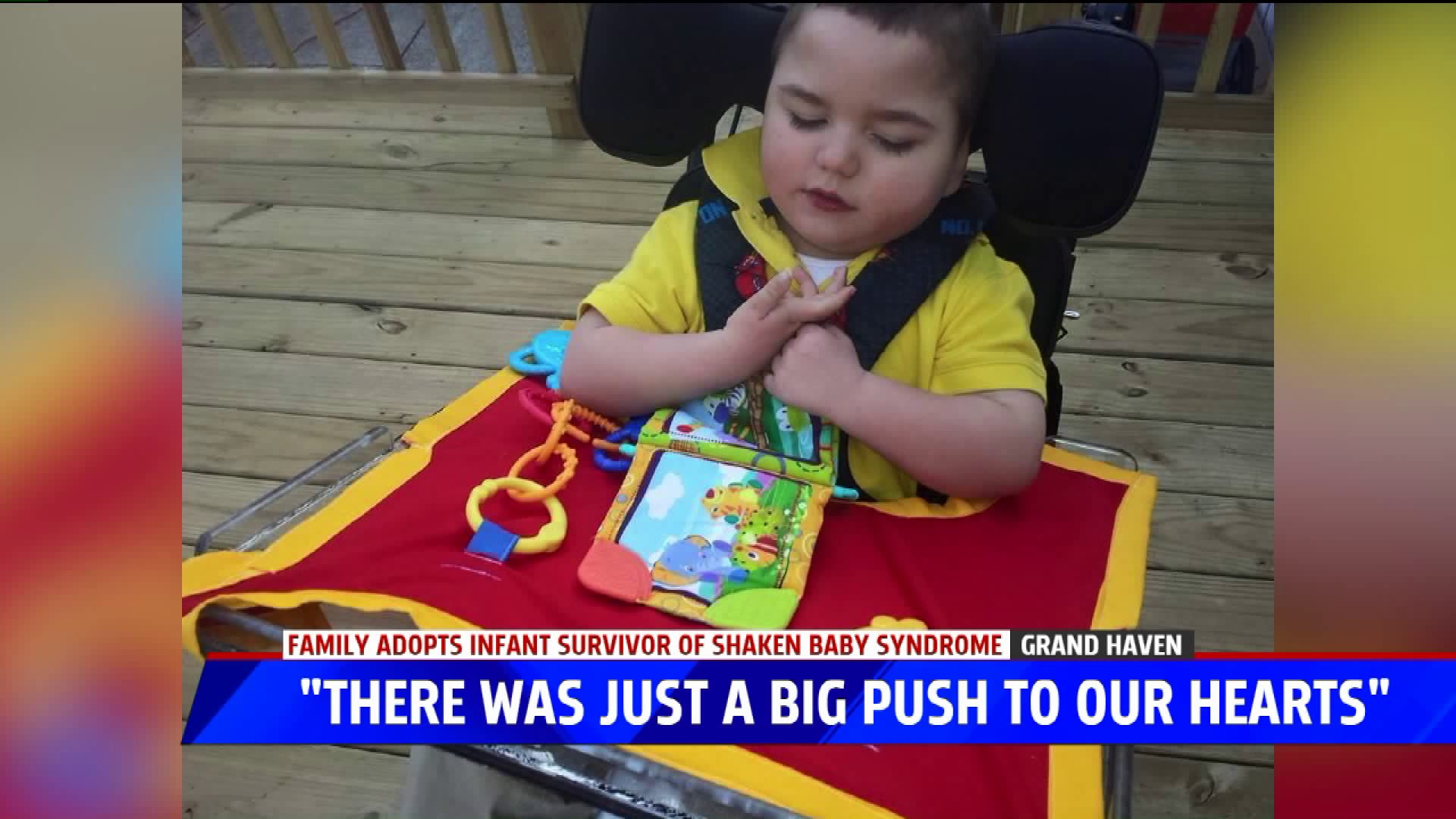 But some children survive.

Zeke Kuiper is 7-years-old. When he was a baby, he suffered Non-accidental Head Trauma, also known as "Shaken Baby Syndrome," because of abuse.

That means Zeke's life is full of challenges.

“These kids that survive, they are at risk for significant developmental delay,” Mary Free Bed's Andrea Kuldanek said.

He can't walk, or eat on his own. Communication is also a struggle. Half of Zeke's body is paralyzed because of the abuse he suffered as a baby at the hands of a female caregiver.

“They figured she was physically abusing him since birth,” Zeke's adopted mom, Chris Kuiper said.

But finding a loving family was never a challenge for Zeke.

Tim and Chris Kuiper first met Zeke when he was in need of a foster family. Chris had experience as an EMT, and their family was already in the foster care system after taking in a family member. The day they got the call to take in Zeke, mom Chris Kuiper says she knew right away that he was meant to be a permanent part of their family.

“I fell in love with him the minute I saw him in the hospital, that was the end of that,” Chris Kuiper said.

For his dad, Tim, the idea of fostering a child with Zeke's amount of needs took some getting used to.

“When we first got the call, everything about it scared me. I originally told Chris no, we couldn’t do it. Because I was so scared,” Tim Kuiper said.

With both his biological parents not in the picture, eventually, the Kuipers made it official and adopted Zeke. But Zeke had different plans. He clung to Tim, forming an inseparable bond.

“I don’t know if it was because I knew he was afraid, and he knew I was afraid also,” Tim Kuiper said.

It took Zeke awhile before he trusted his mom, which his parents think is because his abuser was a woman.

Most of the damage with non-accidental brain injuries is permanent.

“They may not learn to talk. They may not have motor function that allows them to walk and move themselves about,” Kuldaneck said.

Zeke has learned one thing, however. He loves hockey. His parents say by happenstance, they took him to a Griffins game. His whole attitude changes inside the arena. Zeke's face lights up, he smiles, and you can tell he's happy.

Zeke can't see, but has incredible hearing. The noises of skates on ice and cheering on the Griffins are some of his favorite.

For his family, it's just one sign that they were always meant to have Zeke as their son.

“There definitely was a work that was put into place. Long before that lead us to this," Tim said.

“We keep on saying God had a hand in it,” Chris said.

The family hopes their story will inspire others to adopt children with special needs.

You can find more information about that here.